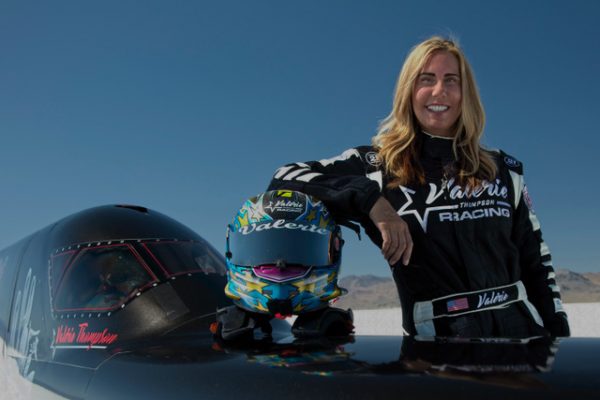 Target 550 project coordinator, Marlo Treit, said, “The team is delighted to be back in Australia for Speed Week and the World Speed Trials. These events provide two opportunities to set new records for our unique vehicle.” Treit added, “We have new crew members, two new engines and a great new driver. I’m looking forward to seeing strong results with all this new talent.”

“This will be my first full-on assault on the 415 mph record driving the Target 550 Streamliner. I’ve had three successful tests with a 290+ mph run on less than optimal salt conditions,” said Thompson.

Thompson could add a new chapter to racing history by becoming the first woman over 400 mph in a piston-powered engine vehicle.

Valerie is the “World’s Fastest Female Motorcycle Racer” and an eight-time land speed record holder with membership in the Sturgis Motorcycle Hall of Fame, seven 200 MPH Clubs and one 300 MPH Club. She kicked off her records with two records with 5-Ball Racing and the Bikernet team in 2006 and 2007 with the Worlds Fastest Panhead. In 2018, she piloted the famed BUB 7 motorcycle streamliner to a record speed of 328.467 mph and is the only female featured on the “World’s Top 10 Fastest Motorcycle Racers” list. Recently included in Dealernews “Top 100 Leaders in Powersports” list, her passion for making history and breaking speed barriers is featured in the upcoming feature film documentary, “Rockets and Titans.”