Tarus 2X2 Is the Collapsible Motorcycle That Can Go Absolutely Anywhere 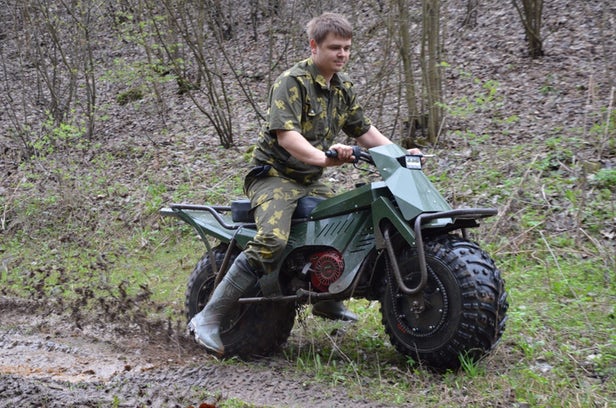 Russia, the land of all possibilities in terms of all-terrain-capable vehicles, regardless of size. Russia is also the home of what has been described as the toughest motorcycle that ever was: Tarus.

Tarus first made headlines way back in 2013, when videos showing a rather crudely made prototype started making the rounds. In just a short while, the videos had reached the farthest corners of the world and, with them, the excellent news that the company behind the Tarus prototype was looking into bringing it to production.

This happened only some six years later, in 2019. Tarus is now officially called Tarus 2X2 and remains the toughest-looking and apparently the virtually unstoppable motorcycle. It’s also relatively dirt cheap, at just $1,700. The bad news (because there has to be a piece of bad news, you just knew it) is that Tarus doesn’t ship outside of Russia.

There is a silver lining, though, and it makes up the reason for this coverstory: according to the makers, there are plans to start shipping these 2X2 bikes to Europe and maybe even the U.S. Of course, when and if that happens, the price won’t remain as low and the makers can’t offer an estimate on how much it would increase.

The Tarus is a fat-tire motorcycle that stops virtually at nothing. It’s so powerful and capable that it’s often described as a two-wheeled ATV, with the mention that even some four-wheeled ATV have had trouble making it through the terrain where this one handled itself brilliantly.

The two videos at the bottom of the page should offer you an idea of just exactly it can do. The first one is a proper review by a Russian publication of the production model, while the second is of the prototype being shown for the first time.

Tarus is incredibly light, weighing only 93 kg (205 pounds) when it’s fueled and ready to go. It sits on massive 25E12-9 KingTyre tires with very low pressure, which offer excellent grip and offset the lack of suspension. Indeed, there’s no suspension on either end, which means riding on this thing in the wilderness for more than two or three hours can become quite a pain. You do get spring suspension in your seat, though.

Luckily, you will have run out of gas by then: there’s a 4-liter (1.05-gallon) tank for gas that’s good for two to three hours of fun. The fuel tank is made of plastic, to further help with keeping the overall weight down.

Tarus is full-wheel drive, thanks to a front wheel chain drive that connects to a shaft-drive system hidden under the frame. The full-wheel drive, in combination with the low weight and low tire pressure in the massive tires, makes Tarus capable of tackling every obstacle with ease, whether it’s tree trunks, ankle-deep mud, ice and snow, or even entire flights of stairs.

Tarus can also float on water because of its weight and tires. In fact, the makers recommend washing it by dipping it into the pond and using the throttle to spin the wheels.

The seat is lower to the ground, allowing the rider to stretch out his legs and reach the ground for balance in this type of situation. Power comes from a Honda’s 210cc four-stroke GX-210 engine, while the prototype was powered by an Ural chainsaw engine, for which reason it only weighed some 50 kg (110 pounds).

That said, with just 7 hp and three-speed transmission, this motorcycle doesn’t go any faster than 35 kph (21.7 mph). It will get you wherever you want to be, alright, but it won’t do it in a particularly fast manner.

Not that all of the above isn’t impressive enough, but the highlight of this motorcycle is the fact that it’s collapsible. You can take the Tarus apart in a matter of 5 minutes, removing one bolt in order to start taking out parts. At the end of it, you can also deflate the tires and pack the whole thing neatly in a carrier bag, just perfect for the trunk of your small city car. Even if you leave the tires as they are, you can still fit it into the trunk of an SUV.

Made in Kaluga, Russia, the Tarus is not road-legal, but it is the ideal vehicle for off-roading, hunting, fishing or whatever other activity you prefer in the wild. It goes perfectly with your Sherp, too.