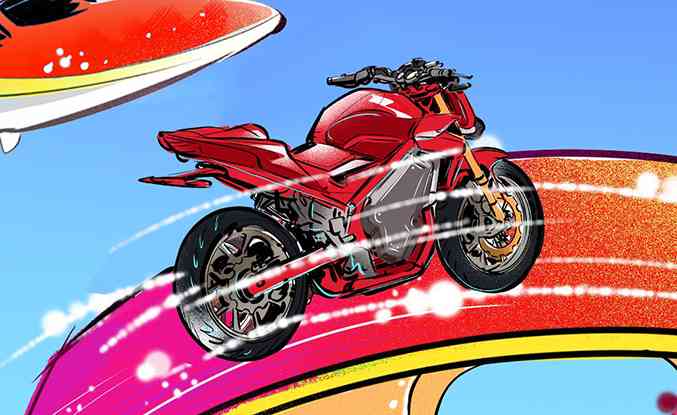 It’s been a couple of months since Honda outlined its electric motorcycle plans, which included a mix of mopeds, scooters and three large-sized “Fun EVs” destined for North America by 2024 and 2025. The initial announcement included a teaser image of two motorcycles and a scooter.

Today, Honda released another glimpse of a future electric motorcycle in, of all places, a rendering of its float for the 2023 Rose Parade.

As the presenting sponsor for the 13th time, Honda will once more be the lead float in the Rose Parade. This year’s float, called “Forever Determined,” is part of an ongoing brand marketing campaign promoting the company’s initiatives including its plans for electrification. Honda says it’s pursuing a goal for carbon neutrality by 2050, and having North American vehicle sales be 100% electric by 2040.

The float shows several Honda vehicles, including the all-electric Prologue SUV, the Acura ARX-06 hybrid race car, a Hondajet Elite II plane, and a prototype Honda eVTOL (electric vertical take-off and landing aircraft). Also nestled in there is what is simply described as “a Honda electric motorcycle”.

The rendering shows a naked motorcycle that looks looks very similar to the Honda CB500F, but with a large module that presumably houses the batteries and electric motor in place of the engine.

It’s difficult to draw too many conclusions from a portion of a sketch of a parade float, but it is worth noting that every other element of the float besides the motorcycle is a product that actually exists in a further stage of development. The HondaJet Elite II was revealed in October, the Prologue is expected to enter production in 2024, and the ARX-06 will be competing in the 2023 IMSA WeatherTech SportsCar Championship. The eVTOL is still at the concept stage, but Honda has at least revealed some information about it.

The electric motorcycle remains a complete mystery, with Honda not even giving it a name in its press release (presented in full below). That gives us two possible theories. Either the electric motorcycle is so early in development that it’s just a mock-up with no relationship to an actual product, or “a Honda electric motorcycle” is all American Honda is willing to say about the project at this stage.

Given Honda’s stated goal of releasing a “fun EV” motorcycle by 2024, the latter seems more likely. With the parade taking place on Jan. 2, it’s possible Honda will provide more information on its first electric motorcycle before the end of the year.

CLICK HERE To Get a FREE Subscription to Bikernet Weekly Newsletter. Stay with the Buzz with Bikernet.com

The “Forever Determined” Rose Parade float highlights new initiatives that Honda is taking on – from the road to the racetrack to the skies – as Honda prepares for an all-electric future. Honda is pursuing the global goal of carbon neutrality for all products and corporate activities by 2050, including a vision for 100% electrified vehicle sales in North America by 2040.

“Our determination to advance the future of mobility is embodied in the Honda products on our parade float and in the 2023 Rose Parade theme of ‘Turning the Corner,’” said Jessika Laudermilk, Assistant Vice President of Marketing for American Honda. “Honda continues to embark on new initiatives utilizing our core technologies that will help people make their own lives better, today and tomorrow, and we’re proud to showcase that in this year’s Rose Parade.”

“Forever Determined” 2023 Rose Parade Float Brings Honda Mobility Products to Life
The groundbreaking Honda products featured on the “Forever Determined” float showcase innovative technology, driven by the ideas and sheer determination of Honda engineers. Represented on the base of the float is the Prologue, Honda’s first all-electric SUV, arriving in 2024, as well as the electrified Acura ARX-06 race machine that will soon compete in the 2023 IMSA WeatherTech SportsCar Championship, and a Honda electric motorcycle. Flying high above are the HondaJet Elite II, the fastest, farthest and highest-flying aircraft in its class, and a product of the future, the Honda eVTOL (electric vertical take-off and landing aircraft) which will fly on a new layer of the sky that is much closer to the ground than the existing layer used by airplanes and is a key part of Honda’s future “mobility ecosystem.” Honda’s 2023 Rose Parade float is powered by a specially configured 3.5L V6 engine from Honda.

Official Honda Rose Parade Vehicles
The Pace Car of the 2023 Rose Parade is the all-new hybrid-electric 2023 Honda CR-V hybrid, the most powerful and fuel efficient CR-V ever. Perfect for daily life or weekend escapes, CR-V is America’s outright best-selling SUV of the past 25 years and the all-new 2023 CR-V hybrid backs up its rugged new looks with a more fun-to-drive personality, excellent fuel economy ratings and increased capability. This all-new hybrid-electric 2023 Honda CR-V represents the latest step in Honda’s effort to reduce greenhouse gas emissions and progress toward the ultimate goal of achieving a carbon-free society. The all-new CR-V hybrid will be built at both Honda’s Indiana Auto Plant in Greensburg, Indiana and East Liberty Auto Plant in Ohio, continuing the 40-year legacy of Honda’s commitment to build products close to the customer*.

The all-new 2023 Honda Pilot TrailSport serves as the Sound Car for the 2023 Rose Parade. The most off-road capable SUV in Honda history, the all-new 2023 Honda Pilot TrailSport is the ultimate rugged family SUV with tough new styling, more passenger and cargo space and a class-leading combination of off-road capability and sporty on-road dynamics. Special rugged features on this all-new Pilot TrailSport include a raised off-road tuned suspension, all-terrain tires, steel skid plates and expanded all-wheel drive system capabilities. Designed in California and developed in Ohio, the all-new Honda Pilot is built exclusively at Honda’s Alabama Auto Plant in Lincoln, Alabama. Since 2006, Honda has produced more than 2 million Pilots in the U.S*.

Honda’s Long-standing Partnership with the Pasadena Tournament of Roses®
Honda and the Pasadena Tournament of Roses® have worked side-by-side for more than 60 years to contribute to a strong sense of community in Southern California and bring entertainment and tradition to people around the world. Honda became the Rose Parade’s first-ever presenting sponsor in 2011. As presenting sponsor for 13 years, the Honda float leads the Rose Parade and showcases the annual event theme.