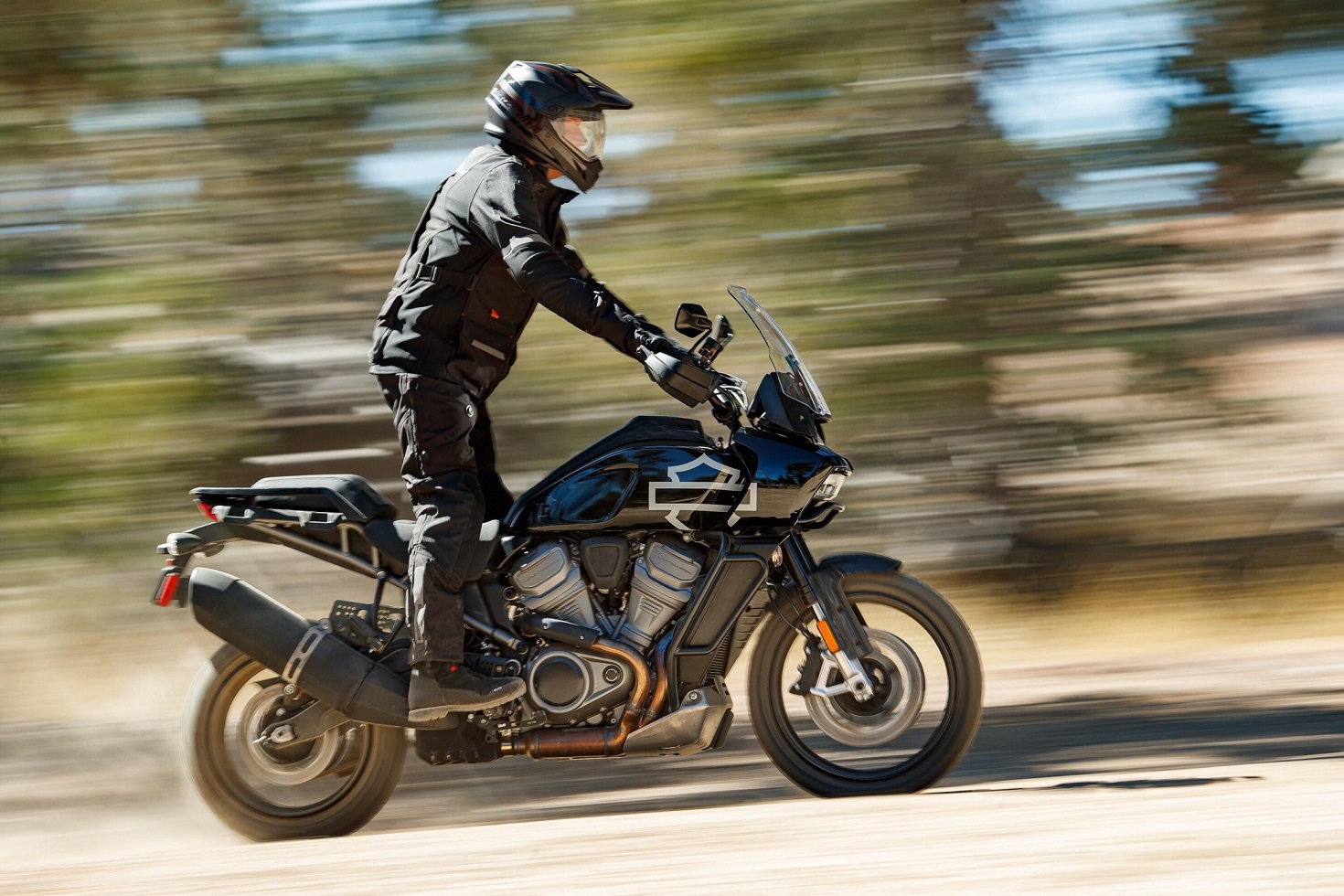 The Pan America ADV and Bronx middleweight naked bikes are unlike anything Harley has done before, but they might just be what The Motor Company needs to stay relevant.

Harley’s first ADV bike, the Pan America, is set to bring that classic H-D burble to the wilder places of the world.

One of the main criticisms that we (and seemingly the rest of the motorcycle press) likes to level at Harley-Davidson is that it’s been slow to respond to the changing desires — and budgets — of a younger motorcycle-riding demographic. That criticism is still valid today, but Harley announced its response during the 2019 EICMA show, and what a response it is.

PAN AMERICA
The Motor Company debuted two bikes in Milan on Wednesday, and they’re both aimed at segments in which Harley has never really participated. The first is a large-displacement adventure touring bike called the Pan America, and it’s pretty damned similar to the Pan America concept we saw back in 2018.

The Pan America is packing a new liquid-cooled 60-degree V-twin engine called the Revolution Max that displaces 1,250 cubic centimeters and is said to make 145 horsepower and more than 90 pound-feet of torque. Those are big numbers, especially for Harley, which is more accustomed to building bigger, lazier engines with less power and more torque.

The Pan America differs from traditional Harley models in several other ways, too. It ditches the brand’s almost ubiquitous belt-style final drive for a chain that allows much simpler gearing changes and ease of repair should something go awry out on the trail. It also uses a rear trellis-style subframe for strength and reduced weight, meaning it should be a snap to mount all kinds of cool adventure-y hard luggage to it.

Other changes include the use of Brembo brakes rather than H-D’s typical in-house branded stoppers, and a swap to an inverted fork setup, which is much more common on more sporting bikes and ADV bikes. (Interestingly, Indian also went the Brembos-and-inverted-fork route on its new Challenger bagger.) The Pan America also looks pretty unique from a styling standpoint, thanks to its beakless nose and squinty cyclops-like headlight. We love it.

BRONX
Perhaps an even more significant departure for the brand is the introduction of its middleweight naked bike that it’s calling the Bronx. This wee beastie is packing a smaller 975-cc version of the Pan America’s Revolution Max that’s good for 115-horsepower and 70 lb.-ft. of torque. That puts it within spitting distance of Indian’s sporting FTR 1200.

Where the Bronx trails the FTR is in the looks department. While the FTR proudly wears its flat-track racer heritage, the Bronx looks a bit more like a cookie-cutter naked bike, though that doesn’t mean it’s unattractive. Far from it. Harley’s playing its cards close to its chest when it comes to details on the Bronx, but we can deduce a few things from the press photos.

First, while drive-side photos of the bike are thin on the ground, in the one we can see, the bike appears to be belt-driven, as evidenced by the great big, gigantic cog on the rear wheel. This feels like a mistake to us, since getting locked into a single, final gear ratio is a bummer for sporty bikes, and changing out a belt-drive cog is rumored to be a real chore. If there’s an upside to belt drive in this application, it’s a lack of need for regular maintenance.

Next, we can see that the bike also has a small, round instrument display that we’re betting is a TFT thanks to all the menu navigation controls on the left handlebar pod. That would lead us to believe that this thing will pack rider-selectable throttle maps and more.

One thing we’d love to see from the Bronx is an inertial measurement unit (IMU) that would facilitate lean-sensitive antilock brakes and traction control. This is a feature that we know and love on our long-term Indian FTR and plenty of other bikes in the Bronx’s crowded market segment, and it’s already available as part of RDRS for Harley’s touring line.

Harley-Davidson says that it’s aiming to have both the Pan America and the Bronx in showrooms by the end of 2020. It’s not given any indication of where we might expect to see these models priced, but we sincerely hope that it doesn’t go the same way as the Livewire and expect its name to demand a super-premium price in a brand new segment for the brand.