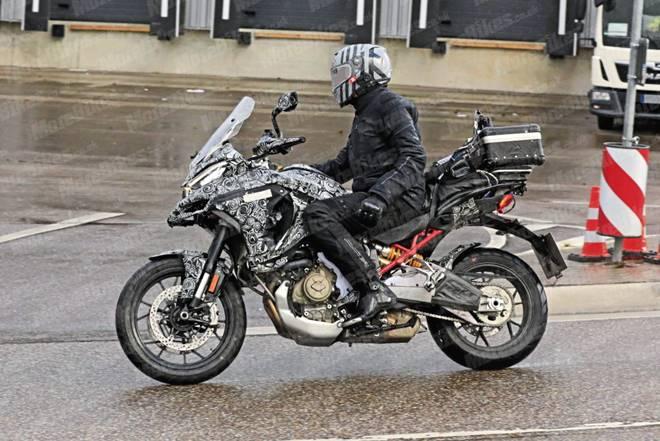 The upcoming Ducati Multistrada V4 is expected to make global debut at the coming EICMA 2020 motorcycle show that is slated to take place towards the end of this year.

Ducati Multistrada V4 has been snapped testing and the latest set of images issued by Morebikes.co.uk gives a clear idea of what the upcoming ADV will be like. The upcoming Ducati Multistrada V4 can be seen wrapped in camouflage and hence, the exact visual details are not visible entirely. The test mule has been spotted somewhere in Europe. Take a look at the pictures and you will notice without any mistake that the test mule is that of a Multistrada. However, there are a few changes that make you believe that this one is a V4. In terms of visuals, the new Ducati Multistrada V4 can be seen with a new all-LED headlamp set up and the front fairing has also been revised. Moreover, the rear view mirrors also look new.

Take a deeper look and you will also notice the radar units placed between the two headlamps and these are a part of the company’s radar-assisted Advanced Rider Assistance System (ARAS). As the name suggests, these units will monitor the distance with other vehicles and will give the rider a warning when a vehicle comes too closer to the bike. Apart from these changes, the upcoming Ducati Multistrada V4 will also get a new subframe along with a double-sided swingarm.

You can see that the subframe is trellis type and is painted in red. Coming to the engine, this is the same motor that powers the Ducati Panigale V4 and the streetfighter V4. However, don’t expect the power figures to be as much astonishing as the engine might be detuned to order to suit the characteristics of an adventure tourer. The upcoming Ducati Multistrada V4 is expected to make global debut at the coming EICMA 2020 motorcycle show that is slated to take place towards the end of this year.