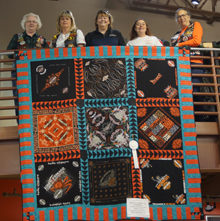 by Kim Everett from https://thegarlandtexan.com

The Dallas Harley Owners Group, founded in the mid-1980s, is involved in numerous charitable and fundraising activities. One of the main events is the MotorCops for Kids Toy Run. The owners’ group, the Dallas Harley Davidson dealership and the Garland and Grand Prairie Police Departments work together, with help from the Shriners, to host the event.

In conjunction with the toy run, the group holds a quilt raffle and the money from raffle tickets, along with registration fees paid by toy run participants, are donated to Shriners Hospitals for Children – Galveston. Event participants also bring toys that are distributed to local children. The group’s hard work has enabled them to donate $400,000 to the hospital and donate countless toys to children.

The late Jerry Patterson and Steve Dye, Grand Prairie police chief, were the two principal founders of the toy run. Patterson, along with his wife, Viola, was involved in getting the charitable programs started. She said that his passion was helping kids.

This year’s quilt is the result of 280 hours of work. All of the quilts are made with Harley Davidson bandanas collected from around the world by club members and their friends and families.

The design is chosen in February, the quilt is constructed, and the hand-quilting begins in the spring. Julie Steger is the principal designer and constructor. They start early so they can enter their creation in the group quilting category competition at the State Fair of Texas. They have won first place as well as four third-place ribbons.

Gloria Barnes, Angela Kennerly, Viola Patterson, Wendy Yeater and Steger are the principle quilters, but a large number of people from all age groups join in the quilting, even if it was just to put in a stitch or two.

Tradition dictates that Paul Langford, the owner of Dallas Harley Davidson, puts in the first stitches. Susan Gabbard, the group’s director puts in the last stitches. A few core quilters meet on Saturdays during the spring.

The goal is to sell 5,000 raffle tickets, which are available at Dallas Harley Davidson, 1334 West Centerville Road in Garland. Tickets will be available Nov. 17 until the time of the drawing, which is after the toy run. (See details below.) Tickets are $1 each.

Being a part of the quilt project is important to those who participate.

Steger once heard someone say, “We don’t pave parking lots. We don’t paint walls. Our money goes strictly to the needs of the children.” That sentiment has stayed with her.

The charitable projects are important to each one of the main quilters.

“I was a recipient of these kinds of fundraisers as a child,” Steger said. “We were very poor and I always wanted to grow up and be that someone that helped others. That’s why I do this.”

Yeater volunteered when she was a child.

“My parents volunteered when I was growing up,” she said. “I am a nurse and I work at a children’s hospital in the Metroplex…when I heard about Motorcops for Kids, I knew I would volunteer. There is nothing stronger than the heart of a volunteer who is willing to give time to a cause.”

Barnes concentrated on riding when she first joined the club, but when she found out about the quilting project, she wanted to get involved. An accomplished rider, she won the 2014 statewide Motorcycle Rodeo for all Harley Davidson riders in the state of Texas.

“Julie is probably the one that has inspired me the most because she is such a giver,” Barnes said. “She gives a lot and it’s awesome to see. This is a great group.”

Kennerly was impressed by the members’ involvement in supporting the charities.

“When my husband, who has now passed away, and I joined the chapter, we could see that the charities were really important to the group,” she said.

Kennerly described another of their Christmas projects. Group members adopt Garland area families and buy clothes and toys for the children and food for the family. On Christmas Eve morning the gifts and food boxes are delivered by a group of riders — and they have Santa with them – which the kids love.

“That’s a fabulous way to celebrate Christmas,” she said. “It means a lot to me.”

Patterson agreed with the other women’s sentiments about helping others.

“Nothing warms anyone’s heart more than giving of yourself to others,” she said. “It is probably the biggest pleasure you can ever have in life.”