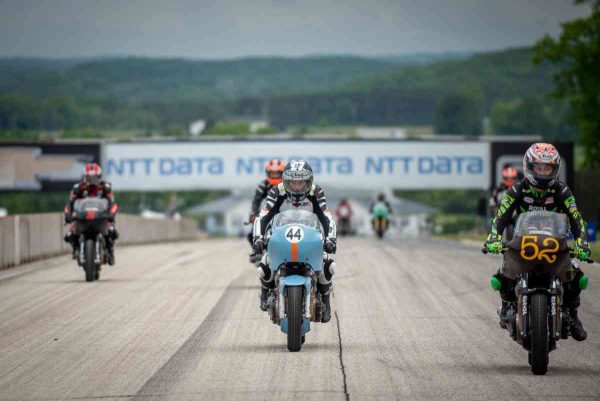 Milwaukee, WI (Monday, June 7, 2022) – Changing conditions, a shuffled program and last-lap drama made for a complicated weekend at Road America for Royal Enfield’s Build. Train. Race. (BTR) Road Racing program. At the second round of the 2022 season, the overall results appeared similar to the opening round at VIR, with Kayleigh Buyck leading the way, but after the action was settled, it was Jenny Chancellor who was awarded the winner’s points and the championship lead.

The Road America round of MotoAmerica started on a challenging note for BTR racers due to changing weather at the Elkhart Lake, Wisconsin facility. Inclement weather on Sunday morning, following the schedule changes due to Saturday’s delayed program, left the BTR women gridding up on Sunday afternoon. The shifting weather made it difficult to predict conditions for the main race, and the BTR Continental GT 650 motorcycles headed out on a drying track on rain tires.

After qualifying on the pole, Kayleigh Buyck jumped out to an early lead in the four-lap race with Chloe Peterson and Crystal Martinez giving chance. The lead trio broke away, where the battle heated up when Martinez got around Peterson for second, closing on Buyck. The three-rider contest for the lead turned into a two-way battle when Peterson dropped away in a low-side crash, and moments later Martinez overtook Buyck for the lead.

The sprint to the finish was on between Buyck and Martinez, until a crash involving Kayla Theisler and Jessica Martin (running fourth and fifth at the time), prompted a red flag, ending the race midway through the final lap. Despite the red flags, Buyck and Martinez continued to hammer away for the lead in a side-by-side battle in the final stretches, seemingly unaware that the race had been halted.

With results reverted to the previous lap, per MotoAmerica rules, Buyck and Martinez recorded first and second place, respectively. But due to their failure to observe the red flags, both riders were sanctioned by MotoAmerica and denied any championship points.

Third-place finisher Jenny Chancellor was awarded the championship points for the win, with Theisler and Martin collecting second- and third-place points, respectively. Both riders were okay after their final-lap incident.

“This was a complicated weekend for us,” said Breeann Poland, Marketing and Communications Lead – Royal Enfield Americas. “We pride ourselves on being able to showcase the Build. Train. Race. program in a premiere championship, and we do understand that this is a process for riders who are new to the competition aspect of road racing. We like to avoid errors but unfortunately, they do happen in racing. This further highlights the importance of Build and Train along with the Race aspect of the program, and BTR accepts the responsibility of ensuring all racers understand the rules of racing that every MotoAmerica athlete is expected to follow.

“While we’re leaving Road America with mixed emotions, we also will not let this discourage our program or its goals. I am proud of our BTR racers who rode phenomenally in what were very tricky conditions. Our goal is to grow the sport through providing opportunity and encouragement to those who have the confidence to get out there. It’s not always an easy road, but growth comes through embracing the entire experience, the mistakes and the successes—that’s what racing is about.”

Royal Enfield Build. Train. Race. Road Racing is looking forward to the full grid of 15 racers returning to action for round three at Brainerd International Raceway on July 29-30.

THE RIDERS
Find bios on all 15 BTR Road Race women at the Build. Train. Race. website.

BTR SPONSORS
The 2022 Royal Enfield Build. Train. Race. programs (Road Race and Flat Track) are made possible by the participation of these generous sponsors. Our continued thanks to all our supporting companies behind BTR.

About Royal Enfield: The oldest motorcycle company in continuous production in the world, Royal Enfield made its first motorcycle in 1901. Royal Enfield North America (RENA) is headquartered in Milwaukee, Wisconsin, and is developing a growing network of more than 150 dealers in North America, including the contiguous U.S., Canada and Puerto Rico. RENA currently offers the all-new Classic 350, Meteor 350, Himalayan and the 650 Twins (INT650 and Continental GT 650) motorcycles, along with a range of Genuine Motorcycle Accessories and apparel.
Visit www.RoyalEnfield.com/us/en/ 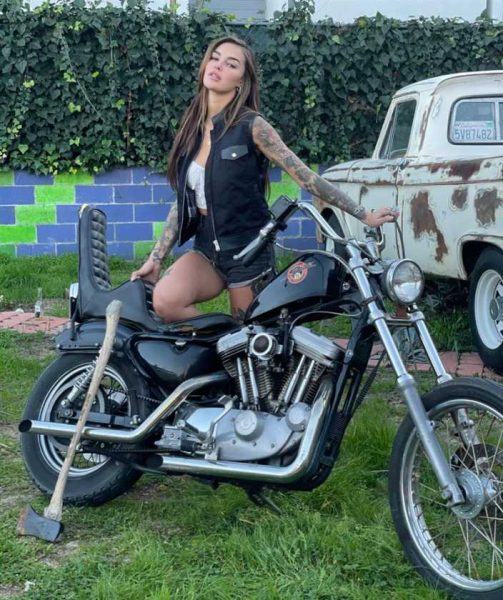