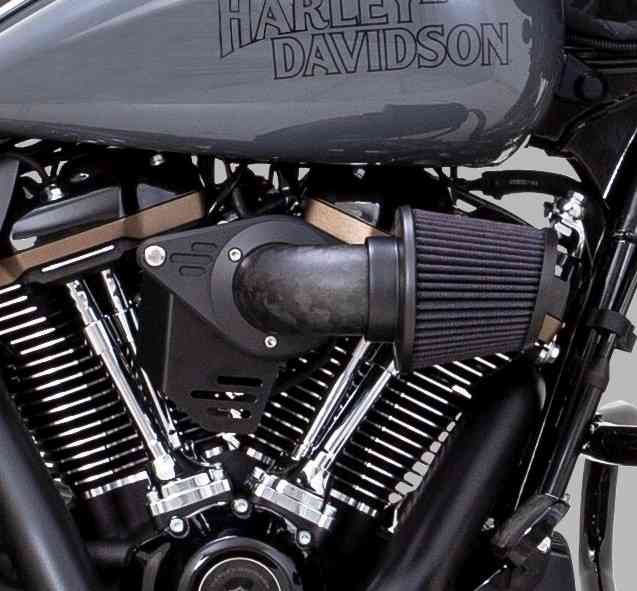 Santa Fe Springs CA – March 4, 2022 – Vance & Hines today introduced the newest addition to its expanding lineup of air intake products with the announcement of the VO2 Falcon, a 90-degree, high performance intake system with fitments for most late-model Harley-Davidson models.

With motorcycle customizing trends moving toward an intense, performance-focused look, the VO2 Falcon gives bike owners the aggressive style they seek and four different finishes to make it special.

The VO2 Falcon is a cut above other 90-degree intakes with its attention to detail. From its slant-nosed oversized filter for higher volume air flow to its precision machined billet aluminum mounting and integrated breather assembly, it looks like it belongs on a rider’s Harley-Davidson motorcycle. The system comes in four finishes, show-quality chrome, ceramic matte black, and two eye-catching carbon fiber choices; high-gloss traditional weaved carbon and matte, forged carbon, a compound originally developed for use in high performance sports cars and is making its first appearance in the V-Twin world.

The VO2 Falcon isn’t just for style. The shape of the unit extends the air intake track, allowing the VO2 Falcon to outperform the leading 90-degree units on the market for both horsepower and torque.

“Air intake systems are our fastest growing product line,” said Vance & Hines President Kennedy. ” They offer customers a chance to personalize the look of their bike and are the start of creating that high performance motorcycle that we all love to ride. The VO2 Falcon makes a strong statement about what’s inside the heart of the bike and the rider.”

About Vance & Hines: The Vance & Hines brand has always been about enhancing the exhilaration of the motorcycle ride. It started over 40 years ago, when Terry Vance and Byron Hines were two young enthusiasts in the fledgling Southern California motorcycle drag race scene.
Visit website at: http://www.vanceandhines.com/