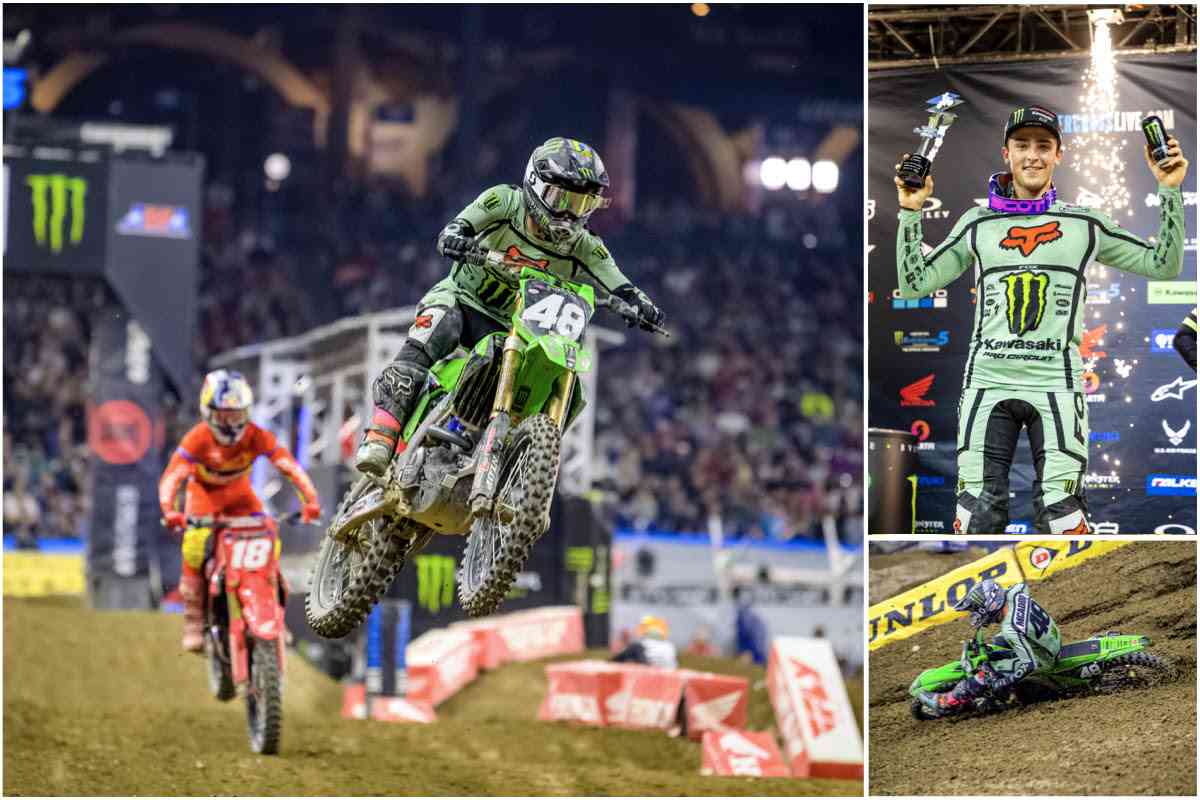 Foothill Ranch, Calif. (March 20, 2022) – Round 11 of the Monster Energy AMA Supercross Championship brought the series to Indianapolis where a tight and technical track layout greeted the world’s finest supercross racers and resulted in an action-packed night that saw Monster Energy/Pro Circuit/Kawasaki rider Cameron McAdoo secure his second consecutive runner-up finish of the 250SX Eastern Regional Championship. In the 450SX Class, Monster Energy Kawasaki rider Jason Anderson bounced back from adversity to finish the race in sixth.

McAdoo, who currently sits second in the 250SX Eastern Regional Championship points standings, entered the weekend action at Lucas Oil Stadium hoping to place more pressure on the current points leader and keep his championship fight alive. McAdoo started the day on the top of the leaderboard in the first 250SX qualifying session after recording a 44.786 lap time. In the final 250SX qualifying session, the Iowa-native utilized the power of his Kawasaki KX™250 to uncork a massive quad after the finish line jump and improve his overall time to 44.060 and qualify second overall heading into the night show.

McAdoo started the first 250SX heat race of the night by grabbing the holeshot and establishing himself at the front of the pack early. The No.48 KX250 rider used his experience to control the lead and develop a sizeable gap from the competition behind during the opening laps. From then on, the Monster Energy/Pro Circuit/Kawasaki rider rode a flawless race as he went on to collect his first heat race win of the 2022 supercross season.

At the start of the 250SX Main Event, McAdoo emerged from the first turn in second place and within striking distance of the leader. As the top two quickly broke away from the rest of the field, McAdoo used the opportunity to study his opponent’s line choice and plan his attack. The front two momentarily jockeyed for first place early in the race before the Kawasaki rider took full control of the lead with 11 minutes remaining. Halfway through the main event, the 250SX veteran used his cunning race skills to maneuver past lapped riders, however, he would surrender the lead after a few close calls racing through traffic. Despite his best effort to reclaim first place, McAdoo finished the race in second and maintains second overall in the 250SX Eastern Regional Championship points standings.

McAdoo’s stellar performance in Indiana places the Iowa native just 11 points back from the lead in the 250SX Eastern Regional Championship as the series prepares a return to the West Coast next weekend.

“Overall, we had another solid weekend. I was feeling really good in practice and enjoyed the track a lot all day. It felt nice getting my first heat race win of the season and battling for the main event lead. The track was super tight and developed deep ruts as the night went on, which I think was a benefit for me as I was able to use my experience on rough tracks to make the pass for the lead. Unfortunately, I missed my line going through the whoops one too many times while trying to cut through lapped traffic and got passed back. The good news is we still finished second and are in the title fight. Now it’s time to let the west coast guys race next weekend before we come out swinging in full force at St. Louis.”
– Cameron McAdoo 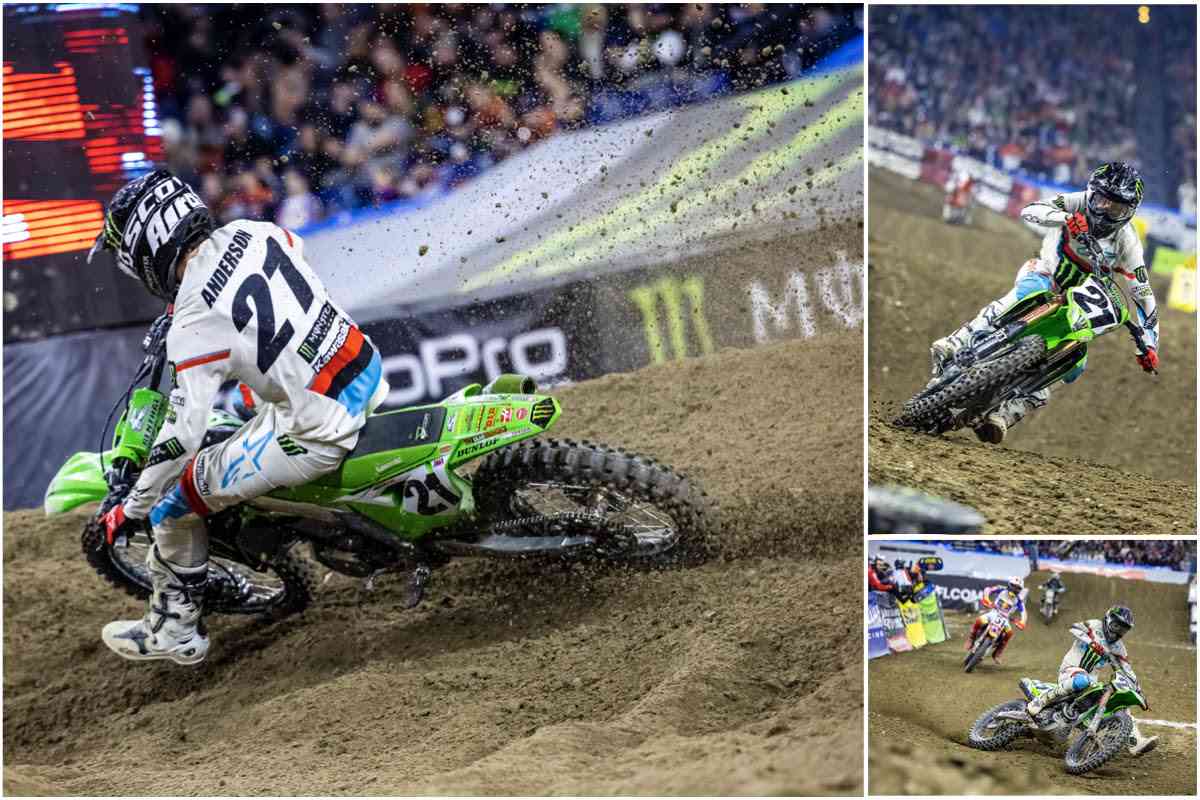 Pleased with how his Kawasaki KX™450SR was performing, Anderson elected to make no bike changes before the second timed qualifying practice and instead focused on improving his line choices. At the end of timed qualifying, Anderson clocked an improved lap time of 43.124 to qualify second overall.

The beginning of 450SX Heat 1 saw Anderson launch out to a top-three start and use the impressive handling of his KX450SR to jump into second place by the second turn. With his sights set on the lead, Anderson used his impressive corner speed to move into first place with just two turns remaining before the end of Lap 1. The No.21 Kawasaki rider wasted no time gapping the competition as he proceeded to build a six-second lead on his way to winning the first 450SX heat race of the night.

When the gate dropped on the 450SX Main Event, Anderson again emerged from the first turn inside the top three. The excellent start allowed the No.21 Kawasaki rider to advance into second early in the race and keep the leader within reach. Facing serious pressure from behind, Anderson proved his resilience by refusing to surrender second place and ultimately shutting down every pass attempt made from the competition behind. With three 450SX wins under his belt this season, Anderson was in search of more and mounted a charge for the lead with 13 minutes remaining. The New Mexico native capitalized on a mistake from the leader in the whoop section and used his sly race craft to take control of first place momentarily before contact from the rider behind dropped Anderson to seventh place. With little time remaining in the race, Anderson continued to race forward and finished in sixth.

With another top-10 finish, Anderson maintains his second-place ranking in the 450SX championship points standing.

“I came into the weekend feeling ready to fight for a win and had a solid day going, especially after the heat race win and first gate pick. Come main event time, I had to do some serious defending early to stay in second and have a chance at the win. We lost some points this weekend but there’s still plenty of fight left in me. I’m here to win and that’s going to remain my main goal for the rest of the season.”
– Jason Anderson