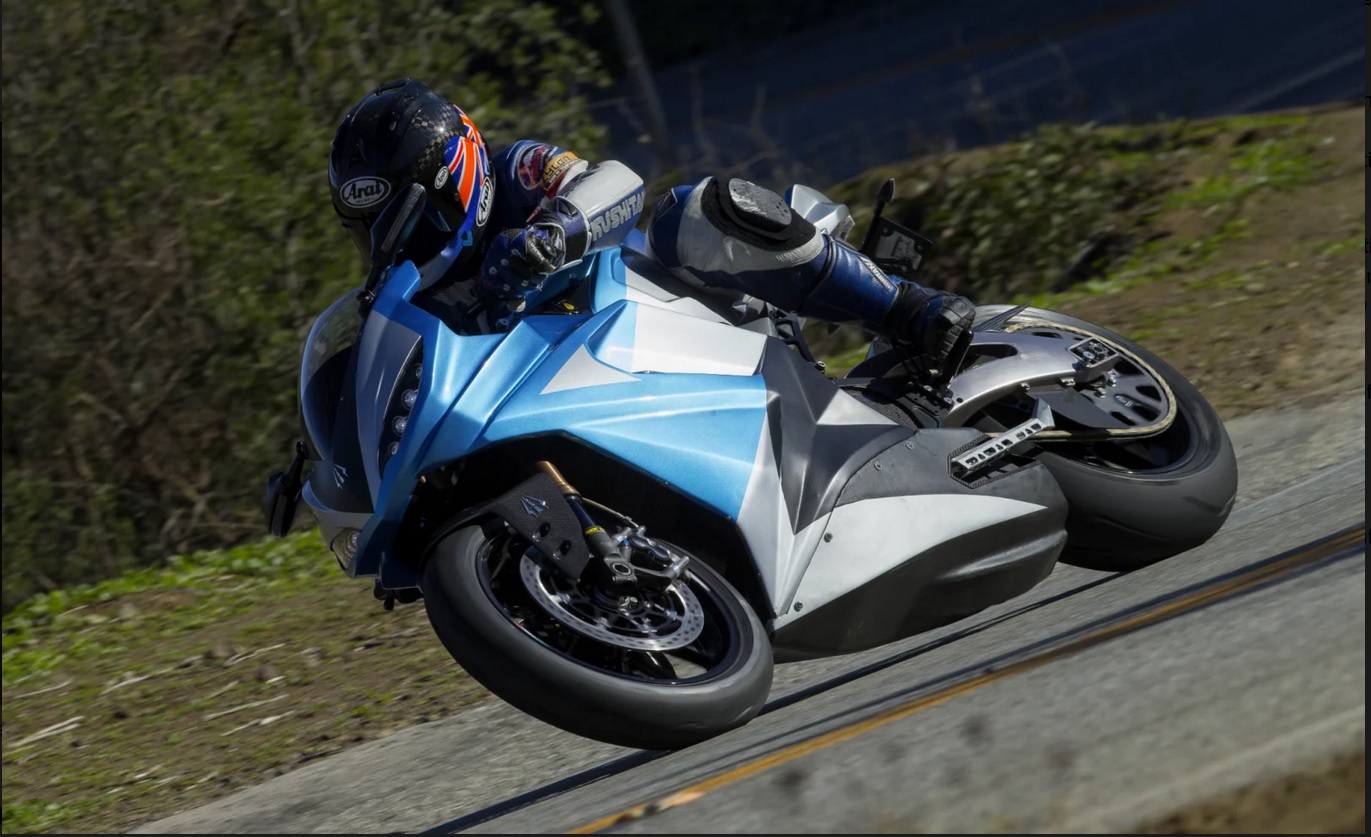 by Michael Alba at https://www.engineering.com/

2 Wheels and 218 Miles per Hour: The World’s Fastest Electric Motorcycle

His bike wasn’t rumbling beneath him as he rolled up to Alice’s Restaurant. The California air was heavy with sun and the black exhaust of the Harleys, Yamahas and Kawasakis purring all around him.

His name was Richard Hatfield, and he was a computer engineer turned bike builder who was taking the first test run of his first prototype. It was an old Yamaha R1 bike frame fitted with an electric motor and stuffed with lithium iron phosphate batteries. The year was 2006, and the bike was the first lithium battery sports bike ever built.

Richard would have revved the engine had there been one. Instead, he turned left at Alice’s and pointed his bike toward the top of the Woodside hills. He gunned it, then it gunned him. It was the fastest acceleration he’d ever felt on a bike, and in an instant, the Yamaha shot noiselessly up the hill.

There’s nothing easy about building an electric motorcycle. There’s limited space for components, yet electric vehicles need one component in abundance: batteries. Hatfield retrofitted his Yamaha R1 with 28 lithium iron phosphate (LiFePo4) batteries, each one weighing 6.6lb and storing 90Ah at 3.2V for a total capacity of about 8kWh. The batteries took 7 hours to recharge and offered a range of 80 miles at 65mph. The whole project cost him $15,000.

It may not have been pretty, but it worked. That test drive at Alice’s Restaurant convinced Hatfield that electric bikes were the way of the future, an “unquestionably” better biking experience.

“For the first time, I experienced that electric torque and thrust without any noise or vibration or sound,” Hatfield recalled. “And the overwhelming feeling of this hand of God shoving me up the hill—without any of those distractions from internal combustion engine bikes—it just overwhelmed me that this is the future. This is the way motorcycles should feel.”

In 2009, three years after he created that first prototype, Hatfield incorporated Lightning Motorcycles, a company to bring his electric bikes to market. Using the knowledge he’d gained from building that first electric Yamaha and several prototypes since, Hatfield and his team of Silicon Valley engineers built a new sports bike that they called the Lightning SuperBike. The SuperBike had a liquid-cooled 104kW, 12,000rpm electric motor, a 345V, 11kWh LiFePo4 battery pack, and user-programmable regenerative braking.

It was a big step from a retrofitted Yamaha, and Hatfield and his team faced many challenges as they worked to bring the SuperBike to life.

“Anytime you try to do something for the first time, there are pitfalls,” Hatfield said. “There were thousands of things that had to be solved and evolved and improved.”

One of the biggest challenges was lowering the SuperBike’s weight to the level of a gas bike while working within the limited space of a motorcycle. For the SuperBike, the team’s solution was to make each component serve multiple functions. The electric motor, for example, doubled as the main stressed element of the bike frame. The battery pack was built with a strong skin to carry loads from the front fork to the motor. The swing arm on the back tire connected to the center of the motor as well.

“Every step of the process required an incredible amount of focus and a team effort to solve problems,” Hatfield noted.

Breaking Records, Then Breaking Them Again

In September 2010, the Lightning SuperBike lived up to its name when it broke the land speed record at the Bonneville Salt Flats Racetrack in Utah. The bike clocked a record speed of 173mph. Less than a year later, in August 2011, the SuperBike outdid itself by hitting a top speed of 218mph. That wasn’t just fast for an electric bike. It was faster than any other production motorcycle for sale in North America, electric or otherwise.

To honor the record, Lightning renamed the SuperBike the LS-218, and it remained the bike to beat. In 2013, the LS-218 took first place in the Pikes Peak International Hill Climb, a winding 12.42-mile journey to the top of the 14,115-foot summit of Pikes Peak in Colorado. The LS-218, in the hands of rider Carlin Dunne, made the journey in 10 minutes and 694 milliseconds. It was over 20 seconds faster than the next best time (10:21.323) claimed by a gas-powered Ducati Multistrada. It was the first year that electric bikes were allowed to compete in the race.

The LS-218 was available in its final commercial form by the end of 2015. It was a street-legal superbike, an emphatic demonstration that electric bikes aren’t just available, they’re desirable.

With the LS-218, Lightning Motorcycles had built a high-performance but high-cost motorcycle. For Lightning’s next project, Hatfield wanted to make an electric bike that was accessible to more riders. In late 2016, he and his team set out to develop a lower-cost follow-up to the LS-218.

“The next big challenge was not just to build something that performed as good or better than the best internal combustion bikes in the world, but something that could be competitively priced and perform as well,” Hatfield said.

Named the Lightning Strike, the new bike would have a target retail price of $13,000. Designing a new bike that would be a third of the price of the company’s previous model was a challenge, but Lightning was finding its feet in the electric motorcycle market.

“We’ve spent a lot of the last 10 years vetting suppliers, building relationships, and trying to enroll supply chain vendors in the vision we have for this product,” Hatfield explained.

The biggest cost saver for the Strike was the plummeting cost of batteries. In 2006, Hatfield’s first lithium battery prototype cost $15,000 and had a total battery capacity of 8kWh. Today, 8kWh of lithium-ion batteries costs less than $1,500.

“We, like most of the electric vehicle industry, are the beneficiary of the reduction in price of lithium batteries,” Hatfield explained. “The lithium batteries are the number one cost in setting all the world records for motorcycles: for performance, for top speed, for winning international racing competitions.”

Earlier this year, Lightning Motorcycles began shipping the Lightning Strike Carbon, the top-spec model of the Strike series, for $19,998. The bike has a 20kWh battery, a 90kW, 15,000rpm electric motor, a top speed of 150mph, and a range up to 200 miles. Lightning will soon offer a $15,998 version of the Strike, followed by a $12,998 version, fulfilling Hatfield’s goal of having a great electric bike with an entry-level price.

“We’re starting with the top-spec bike, getting that out to customers, and then working into the more competitively priced bikes,” Hatfield commented.

Lightning Motorcycles hasn’t forgotten about its record-breaking superbike. In 2018, the company built an even higher-performing successor to the LS-218: the LS-218R. But when the company took the bike to the Bonneville Salt Flats to test its top speed, the track got in the way of a new record.

“Unfortunately, the quality of the salt at Bonneville has really been degrading over the last 10 years,” Hatfield explained. “So, when we took the new bike to the salt, anything over 50 percent throttle basically spun the rear tire. We ended up going 209.7 at 58 percent throttle with the rear tire going 235. The rider said he felt confident it would have broken our existing record by a pretty large margin, but we just couldn’t put the power down.”

Lightning hopes to break its record—and find a proper name for its new bike—as soon as it can pinpoint the right test track. Meanwhile, the company is experimenting with new ways of designing its motorcycles. For example, Lightning has partnered with software provider Autodesk to use generative design to optimize and lightweight parts of its bikes. Nothing has entered production yet, but Hatfield is confident in the technology.

Looking back on that day in 2006 when he rode his electric Yamaha for the first time, Hatfield feels grateful for the confluence of good timing and clever engineering that led to Lightning Motorcycles.

“Sometimes there’s a feeling of just being very fortunate to be at the beginning of something, and being able to make a difference and lead a charge,” he said.