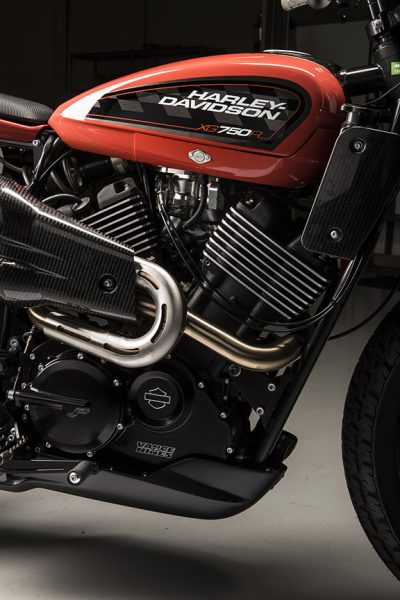 “There is extraordinary energy building behind the new American Flat Track series and after decades of XR750 dominance, it’s time to bring a new level of performance and technology to the track with the Harley-Davidson XG750R,” said Harley-Davidson Vice President and Managing Director U.S. Mike Kennedy. “The new Daytona TT promises to be a thrilling event. If you are in Daytona for Bike Week, ride to the race and help the Factory Team kick off an exciting season.”

“Unlike our competitors, we are going flat track racing behind an American-made production engine,” said Kennedy. “The XG750R is a purebred racing motorcycle, but its modified engine is based on the same Revolution X V-Twin anyone can buy from a Harley-Davidson dealer in a Street 750 motorcycle, an engine designed by Harley-Davidson engineers and assembled at Harley-Davidson Vehicle and Powertrain Operations in Kansas City. There’s a direct link from the Street 750 to the XG750R flat tracker the Factory Team will be racing for a championship, and that link is our passion for performance.”

The XG750R raced through a development season in 2016 alongside the air-cooled Harley-Davidson Factory Team XR750 motorcycles. The XR750 has carried racers to countless victories and 37 AMA Grand National championships in 44 seasons of competition. That winning DNA is the foundation of the XG750R, an evolutionary step into the future of flat-track racing. Its race-tuned Revolution X engine and racing chassis were developed in collaboration with Vance & Hines Motorsports. The XG750R flat tracker motorcycle is not a production model. The 750cc XG Revolution X V-Twin engine is for sale through Harley-Davidson dealers today and can be modified for racing use by aspiring dealers and privateers.