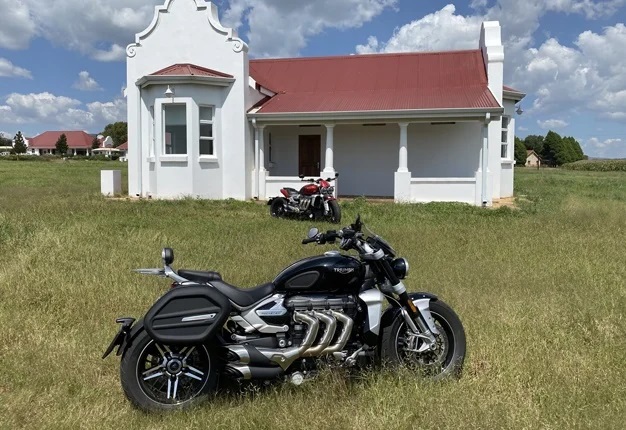 As promised during the local launch of the new Triumph Rocket 3, Triumph South Africa allowed me to ride the beast on Wednesday, March 25, beating the national coronavirus lockdown by just two days.

It was a bitter-sweet experience because while riding the open (and already noticeably quieter) roads in the Hekpoort area of Gauteng, I was keenly aware of the fact that this would be my last leisure ride on a bike for quite a while.

I was joined on the trip by Triumph South Africa CEO Bruce Allen and a colleague from another publication, and the conversation over brunch was predictably dominated by our shared concern about the effects that the looming lockdown, as undeniably necessary as it was, would have on the country’s already brittle economy.

But all of that did nothing to distract from the experience of riding the world’s biggest-capacity production bike. At 2500cm³, the Rocket 3’s engine capacity exceeds that of most cars – almost double that of the popular B-segment hatchbacks that are ubiquitous on South African roads. Housing an engine of that size dictates the design approach, and the Rocket 3 presents a squat motorcycle that is not likely to be mistaken for anything else.

Despite being not very tall, the sheer bulk of the bike is somewhat intimidating at first sight. This feeling is not dispelled once you swing a leg over, because that’s when you realise how wide the frame actually is. That said, as soon as the wheels start rolling and your feet are on the pegs, the intimidation factor dissipates with the realisation that, despite its bulk, the Rocket is really well-balanced.

It carries its weight low in the frame, and the size seems to melt away as speed picks up, so that by the time you reach the first traffic light, you’ve forgotten that you are sitting astride a machine of decidedly unusual proportions.

Sandton’s streets are not the place to explore the limits of the Rocket’s prodigious torque, but it did allow me to develop an appreciation for the remarkably smooth quick-shifter. Working both up and down, shifts are immediate and jerk-free, even at lower revs. With a bike that can be ridden in top gear most of the time, a quick-shifter may seem unnecessary, but this one worked so well that I found myself running up and down through the ratios for the sheer fun of it.

We soon hit the highway, and with the relative lack of traffic, I could start playing with the throttle. The torque was everything I expected, and then some. Twist the throttle wide open in any gear, and the Rocket takes off like the proverbial scalded cat leaving your body caught between the twin sensations of your arms being wrenched from their sockets and your hands strained to their utmost to maintain a grip on the handlebar.

On the other hand, if you give the twist grip the respect it demands, the torque is exhilarating but manageable. Overtaking becomes a non-event – you edge up to whatever is in front of you, wait for a brief gap in the oncoming traffic, twist the throttle and zoom past it in the blink of an eye.

Highway gave way to some twisty backroads, and I found that the Rocket is not averse to brisk cornering. At this point on the route, I was on the Rocket 3 R, the “sporty” naked version with footpegs almost directly underneath your hips. This gave me the opportunity to adopt the usual weight-forward riding position, and I could attack the curves with confidence.

While no sportbike, the Rocket remains stable through the twisties, making it once again easy to forget how big and heavy it actually is.

After brunch, I switched to the GT. On this version, you get a welcome windscreen, and footpegs set more forward for a relaxed riding position. I’m not a cruiser person, but to my great surprise I found that I preferred the GT to the R. The small screen was remarkably helpful in preventing my body from acting as a drag chute, and the footpegs weren’t so far forward that I was forced into the dreaded C-shaped riding position.

Although these slight changes to the identical frame shared by the two variants made the GT feel like a different bike altogether, it retained the sure-footed handling of the R, leaving me to enjoy the twisties on the way back as much as on its sibling.

The new Rocket 3, aimed mostly at the US market where long, straight roads and low-speed limits are at the order of the day, is without a doubt a niche bike. As such it is unlikely to appeal to a broad audience locally, but one thing is for sure: if I were offered one for a trip down to Cape Town, I would grab it with nary a second thought.