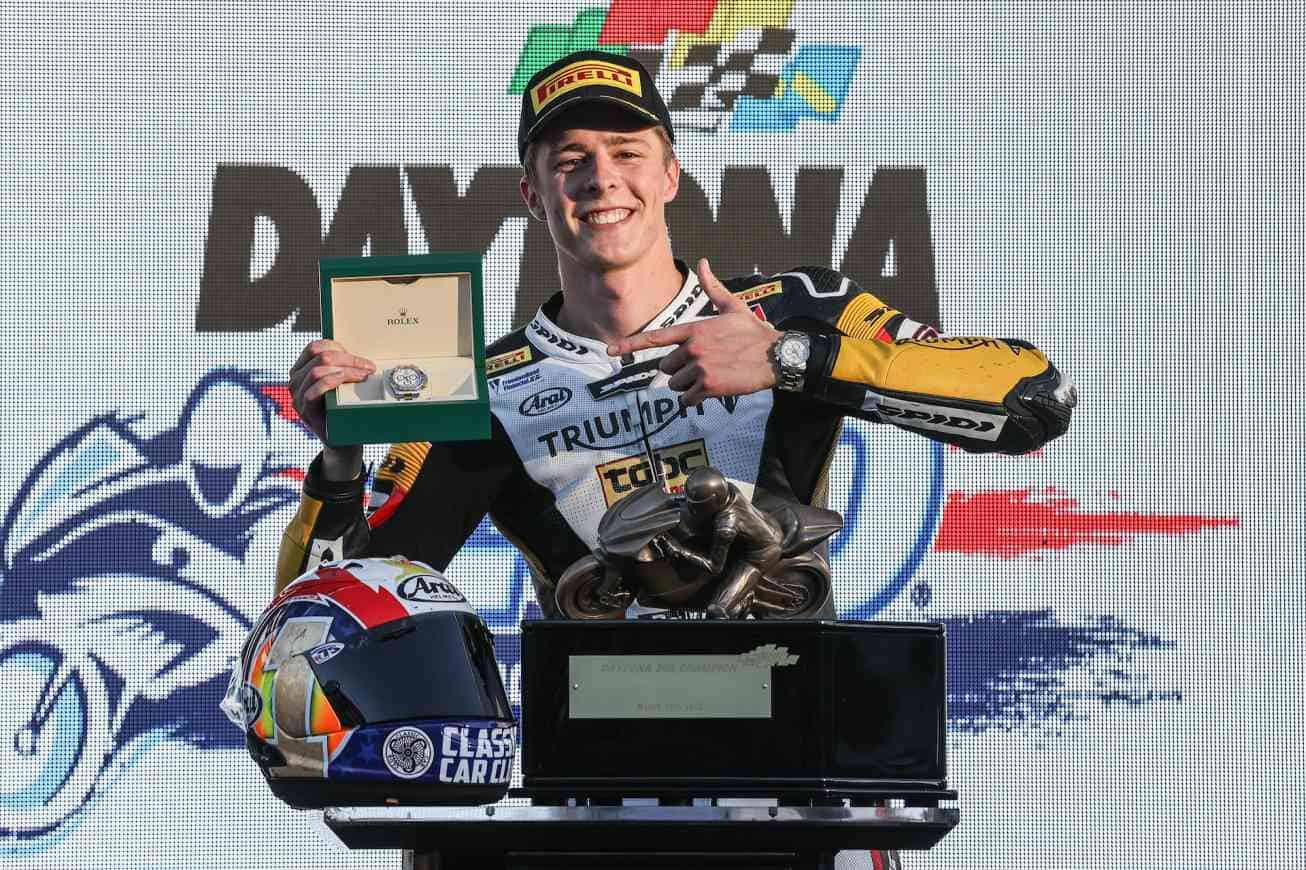 For the second consecutive year, Paasch captured the victory and Rolex

DAYTONA, Fla. (March 12, 2022) – Pirelli Tire North America stormed to victory and a one, two, three finish at the 80th running of the Daytona 200. The victory marked the second consecutive at Daytona for TOBC Racing rider Brandon Paasch who relied on the performance of the DIABLO™ Superbike range in each of his successes. Attack Performance Yamaha rider Cam Peterson came up 0.007 short to finish second, followed by fellow South African Sheridan Morais in third aboard his Syntainics / Penz13 racing machine, making it an all Pirelli podium sweep for the first time in the event’s history.

“Man, what a race,” said Paasch. “I kind of hung back early to let everyone settle in before making my moves and we got going just in time. That was a close finish and the slingshot worked out perfectly. My team decided to not change tires on our last pit stop, which definitely was a gamble, but it showed how much traction was left in my Pirelli’s as we came to the final stretch. A huge thank you to Pirelli for their efforts that have played a big part in my Daytona 200 victories!”

The 57-lap shootout proved to be an all-out battle as riders exchanged passes for the podium positions lap-after-lap. Paasch used patience for the majority of the race, running just inside the top-five with his sights locked in on the front-runners. As riders began to make their final pit stops, Paasch found himself out front before making a pit stop of his own, allowing Peterson to inherit the lead with 12-laps remaining. Paasch and the TOBC Racing team elected to pit for fuel only after seeing how well the DIABLO™ Superbike slicks continued to hold up. He would return to the track in second but was quickly shuffled to fourth, as he got back up to speed.

“My team absolutely crushed that second pit stop, which put me in a great position,” said Peterson. “I was kind of out there in no man’s land with a little bit of traffic and no draft. I came around to the finish and thought I had put myself in the perfect position, and at the last second, I could feel Brandon there and tried to push up on him. It was a fun race and a good confidence builder.”

Paasch and Morais used one another to begin a push towards the front, slowly closing in on the rear wheel of Peterson with just three laps to go. With the race to the checkered flag on, it was Paasch who proved to have a brilliant strategy holding back throughout the race and using a slingshot move down the final straight to take the victory by just 0.007 seconds over Peterson. Morais was just behind the lead duo to complete the podium in third, 0.057 seconds behind the winner.

“I wanted to break away so bad, but it just seemed impossible,” said Morais. “That was a fun race. Probably the most fun I have ever had in a race. Every lap someone was there. I thought Cam should have had that race, but we put our heads down and managed to close that gap and it was a battle to the finish.”

“What an incredible way to cap off the weekend here at Daytona,” said Oscar Solis, senior racing manager, Pirelli. “To be able to win this iconic event for the third consecutive time is special and to do it by sweeping the podium just makes it that much sweeter! It was a tight race to the finish and having so many Pirelli riders battling for the win just shows how capable the DIABLO™ Superbike range is. Congratulations to Brandon on the win and Cam and Sheridan on their podiums!”

In addition to capturing the top three spots, Pirelli showed its domination with six riders in the top eight positions, including TOBC Racings Danny Eslick sixth, TSE Racing’s Harry Truelove seventh, and Vision Wheel / Discount Tire / KWS Motorsports rider Geoff May eighth. With MotoAmerica and Daytona allowing riders to choose the tire brand of their choice, more than half of the grid elected to run Pirelli.