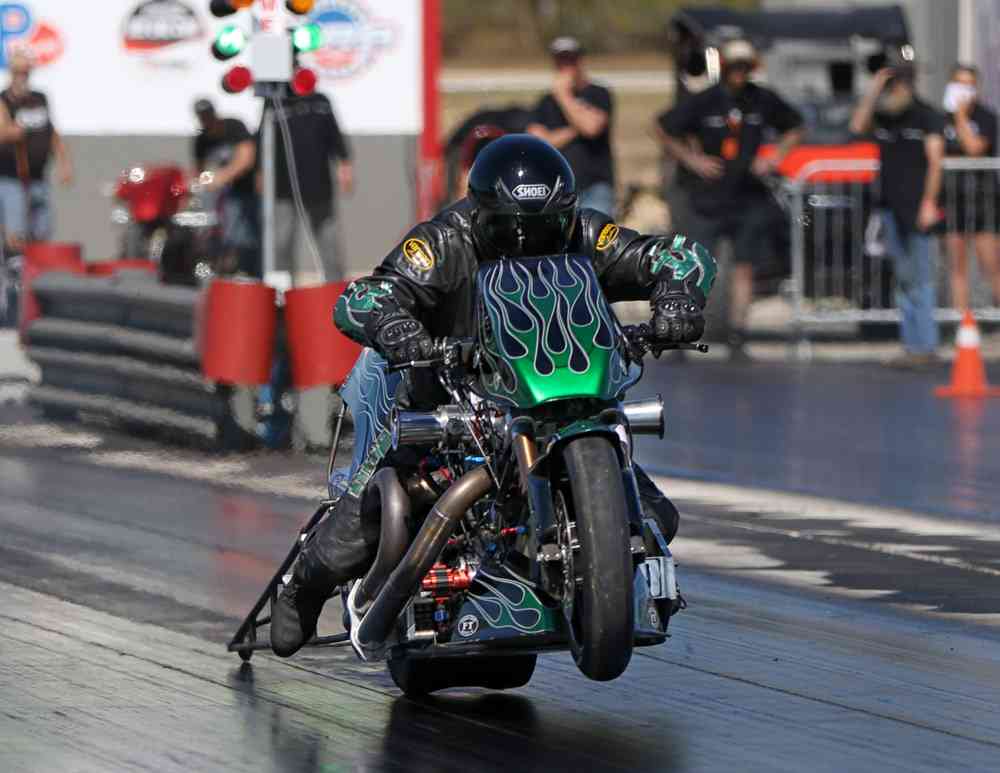 Open air party decks sit atop grandstands on both sides of the track. For AHDRA’s Coca-Cola Southeastern Thunder Nationals, local Coca-Cola guests and executives were able to marvel at their first view of flame-throwing Top Fuel Harleys. In between rounds and passes, they were able to keep up with college football while enjoying shade, a cool breeze, a BBQ buffet, beers and Coke products. A sportsman’s paradise.

The mix of this fine, refurbished facility and AHDRA All-American motorcycle drag racing made for a great weekend on October 21-23, and no one took better advantage of what the weekend had to offer than Top Fuel racer Tracy Kile. “Loved everything about the track,” said Kile. “It’s set up to have fun and run well. It’s really awesome when you go to a place that welcomes racers with open arms.” 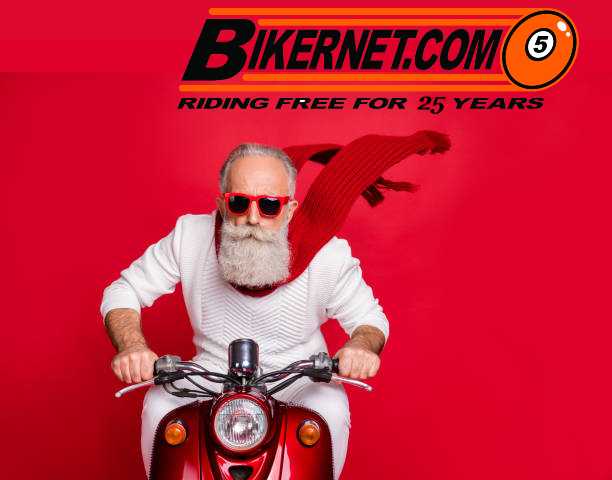 Follow the Events that matter – get up to speed every week – just join the fun by Subscribing to Bikernet Blog’s Free Weekly Newsletter. Click & Go!!!

Kile’s main challenge at North Florida was racing without the feedback he’s gotten used to from his dashboard. “My dash quit working,” said Kile. “I thought that I had two good ones with me and neither one of them worked. Once you get used to that shit, it’s hard. I was flying blind, so that’s probably why it slowed down a bit on raceday. But stuff’s been working and it’s a helluva lot more fun when you’re winning and everything stays in one piece.

“Winning don’t suck. I asked (Mike) Romine years ago if winning ever got old. He said ‘No’ and I have to agree.

“I wanna thank Josh Peake and the owners at the track, and Coca-Cola. Josh really busted his ass all weekend. I couldn’t get it done without Mary (“Bad Ass Mary” Dangrow), and thanks to the Bad Apple Nation for years of continued support. Thanks to Chopper and AHDRA for giving us a place to race.”

Trying for his third straight win, Kile’s Bad Apple Racing teammate “Jimmy Mac” McMillan struggled from the very first moment. His weekend ended when he torched the back cylinder in Q3.

“We came to the race with two nitro motorcycles, which everyone knows is insane,” said Martin, who also races Top Fuel. “We managed to get both on down the track and qualify with both of them. But my old steady here was able to go clear to the finishline and pull off a win.

“I wanna thank Hawaya Racing. Johnny Vickers has helped me many, many times with both bikes. I got to thank my crew chief, Guy Glover. Got to thank my brother and his friends that helped me at his race shop in Palatine, Illinois. And of course Joey Woolsey. He’s my other crew chief when Guy can’t show up. Without that nucleus of people, I couldn’t manage this.”

“My bike was very fast off the trailer and the track was perfect,” said Tomsu. “Just a great weekend of racing.

Dwayne Gee’s turbo bagger was ridden to the MTC Pro Comp Outlaw wins by Khole Sellers, setting both ends of the AHDRA eighth mile record with a 5.49 at 133 mph.

“I would like to give a thanks to Streetking Racing,” said Sellers. “It was a great track and the personal were outstanding.

“Special thanks to Dwayne Gee, Hamma Ville, and David Gray for helping keep the bike together and making it possible for our team to take the win.”

Bradley Croneberger and his son made the long trip from Pennsylvania pay, with Bradley Sr. winning Universal Fleet & Tire 7.00 and 7.35 index, and Junior winning Junior Dragbike. Senior qualified number one in both classes.

The lights in the 7.35 final were very sharp and very close, with Croneberger’s .011 gaining a scant .001 against Cody Hayworth. Both riders broke out—Croneberger with a winning 6.99 and Hayworth with a 6.97.

The father/son Road R.A.S.H. Racing duo of Todd Hayworth and 7.90 runner-up Cody won Vreeland’s Harley-Davidson Super Gas 6.35 and 6.60 index, respectively. This is the first time they have doubled up.

Todd’s final round win against Manny Gassman was a double breakout, with #1 qualifier Hayworth’s .128/6.30 scoring against Gassman’s .150/6.28. “It’s hard to get slowed down n the eighth mile!” said Todd, who thanked Knowbody’s Sheetwerks and his wife Pam.

Reaction times were much better in Cody’s final against Manny “Taco” Carrasquillo, with Hayworth taking the tree with an .010 versus Taco’s .054. Cody’s 6.69 was also closer to the 6.60 number than Taco’s 6.70.

“Look forward to returning to North Florida Motorplex next year,” said Cody. “Thanks to my sponsor Wire & Cable Your Way, my wife Nena, and my parents.”

Neither Saturday Eliminator winner Chris Ussery or runner-up Joe Abner will want to brag about their reaction times. Ussery’s .244 had the advantage against Abner’s .300, and Ussery’s 7.41 was much closer to his 7.40 dial-in than Abner’s 8.37 on an 8.30. Ussery also qualified number one and runner-upped in 11.50 index.

“I want to thank the man upstairs for everything I have and do daily!” said Ussery. “Twitches Stitches, Swamp Fox Racing, Fast Action racing team and Eatmyink—thank you for all you do for Bulldog Racing!

“We have a nice lead on points and hopefully we can capitalize on the last two races and maintain that lead. We are also in the top three in the 11.50 index.”

Despite wild wheelies on his short wheelbase Buell streetbike, Racin’ Ray Robinson won Sunday’s Eliminator class. He beat David Gray in the final, his .093 light giving him time to eat a bagel before Gray left with a .412. Robinson ran 7.97 on his 7.57 dial, while Gray ran 8.03 on a 7.75.

“If it wasn’t for Big Train and Universal Fleet & Tire crew, and the motorcycle club I’m in, those wheelies (and the win) would have never happened,” said Robinson. “But that bike’s like a bucking bronco—you just gotta hold tight with a iron fist!”

“It was a great weekend at a great track,” said Abner. “Thank you to Universal Fleet & Tire Racing and Fast Co. for all their support and help to get me here and help me do well. It takes a village and we are one awesome village—from the kids cheering us on, all the mechanics, and the ladies in the pits.”

After the awesome debut of this brand new stop on the circuit, AHDRA looks forward to returning to Florida for the World Finals at legendary Gainesville Raceway on November 11-23. Bill and Chrissy Rowe look forward to welcoming the AHDRA family to Gainesville