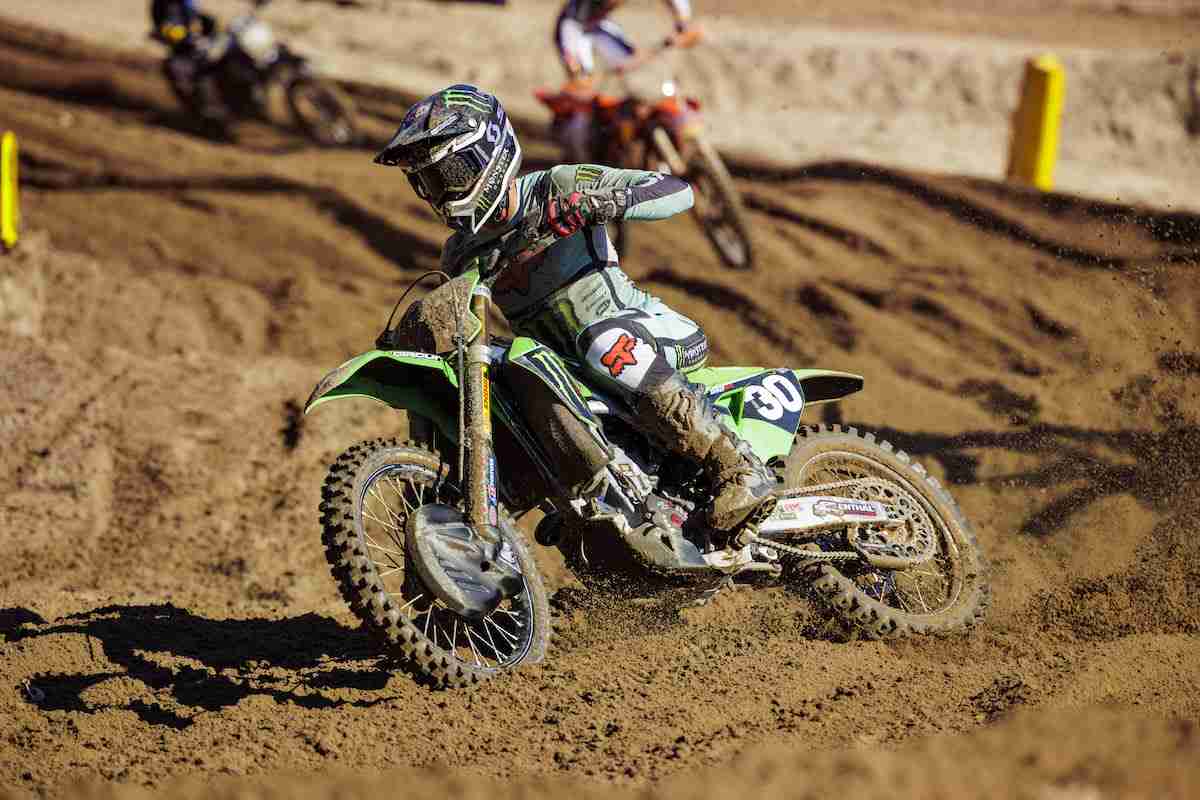 Summer in New England brought clear skies and mild temperatures combined with another reverse race schedule where the 450 Class would take the track first, leaving rougher conditions ahead for the 250 Class. The Monster Energy/Pro Circuit/Kawasaki duo kicked off qualifying with Shimoda looking to carry momentum from last weekend’s historic win and sat at the top of the leaderboard briefly during the second session before finishing with the fifth fastest lap (2:13.514). Teammate Hammaker ranked 11th with his best lap time of 2:14.514 as he got adjusted to the tricky sand track where momentum is crucial.

The opening 250 Class moto of the day began with Shimoda crossing the Holeshot line inside the top-10 and Hammaker several positions back. The No.30 wasted no time chasing down the lead riders during the early parts of the moto. As the race entered the latter stages, a three-way battle for second began to form. A slight miscue by the third place rider was all Shimoda needed to advance and continue charging until he caught up to second place. A combination of late moto speed and crafty line choices moved Shimoda into second place. With a clear track ahead, Shimoda turned up the pace and began recording some of the race’s fastest laps, cutting the deficit from nearly six seconds to just three on the leader. Lapped traffic slowed the leader down and helped Shimoda close in further, shrinking the leader’s advantage to just under two seconds. Still, despite his best efforts to capture the moto victory, Shimoda would cross the finish in second. Hammaker quickly adapted to the track conditions to advance into a top-10 position by Lap 5. The No.47 continued his push through the field before issues with lapped riders dropped Hammaker back to 11th, where he’d finish the race. 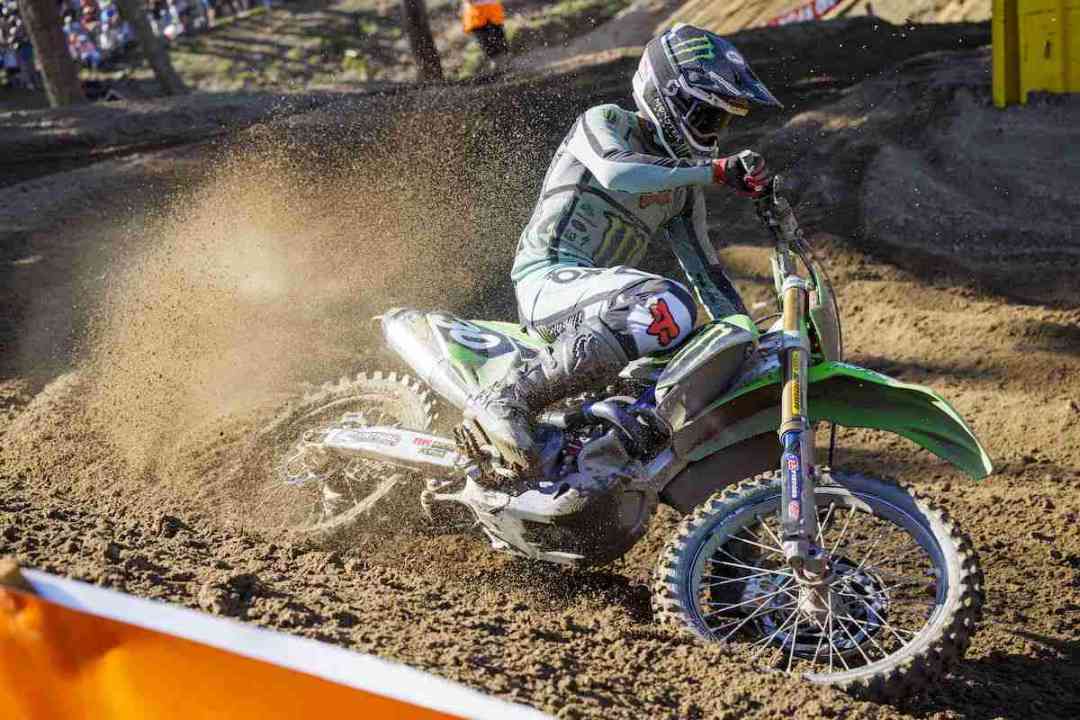 The final moto of the evening saw Shimoda and Hammaker emerge from the first turn running in top-10 positions. A quick pass by Shimoda early in the race allowed the No.30 rider to take control of fifth by the start of Lap 2. The pass also granted Shimoda the perfect opportunity to study his opponent’s line choices. As the track conditions continued to deteriorate throughout the moto, Shimoda’s late-race pace again proved effective as he was able to take over the fourth-place spot and quickly chase down his opponent in third. The KX™250 rider was noticeably quicker than his opponent and managed to solidify the pass for third on Lap 9. While Shimoda ran comfortably in third, Hammaker was involved in his own battles to climb up through the field. The No.47 started the race in 10th before a mistake dropped him down to 17th. With his work cut out for him, Hammaker put his head down and pushed with all his strength the entire 30 minutes plus two-lap race. Hammaker’s admirable effort resulted in a 12th place moto finish and 11th overall on the day. Shimoda crossed the checkered flag securely in third to earn second overall with 2-3 moto finishes.

“I had good speed in the first moto but spent too much time following the guys in front instead of making passes early on. In Moto 2, I got an okay start and actually passed the guys in front quicker than in the first moto but the track was so gnarly by that time of the day that I couldn’t mount a real late-race charge for second. I still finished second overall, which is a good result for us.”
– Jo Shimoda

“This was my first time racing at Southwick and I was excited to learn a new track. I quickly realized this was going to be a physically demanding race course as I went through practice and strategically decided to use the practice sessions as an opportunity to find consistent lines instead of homing in on one fast lap. I got an okay start in both motos but it was hard for me to make a lot of passes happen on this track, especially with how deep the field is. As a racer, we’re never completely satisfied with how we perform but we showed promising speed in the race and will work on getting better starts so we can battle with the guys up front next weekend.”
– Seth Hammaker 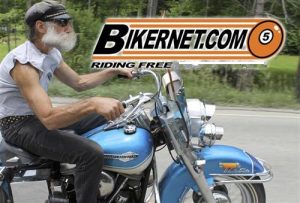 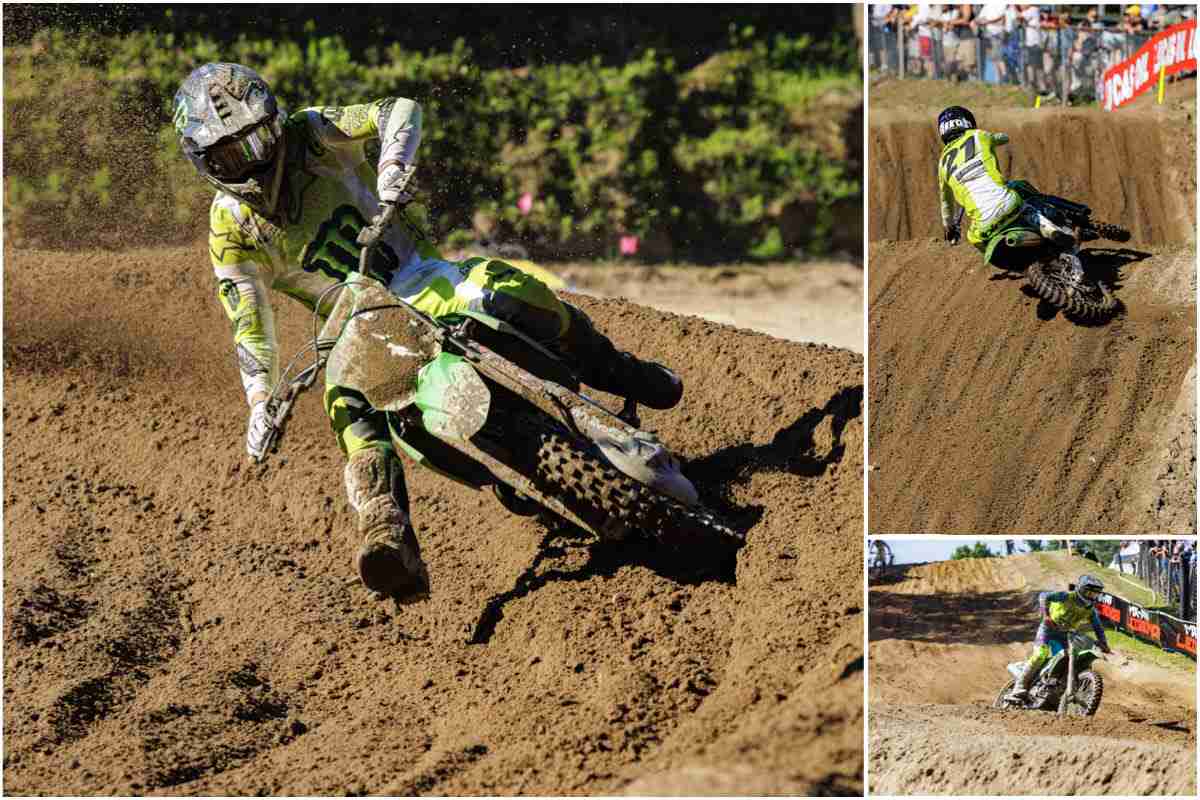 Similar to last week, the Southwick National also featured a reverse moto schedule with the 450 Class racing first and followed by the 250 Class. The Monster Energy Kawasaki duo of Anderson and Savatgy took the track in the second qualifying session with raised intensity. Anderson reached the top of the leader board with a 2:09.525 lap time, good for third fastest overall, while teammate Savatgy logged the 10th fastest lap with a 2:11.285.

In 450 Class Moto 1, Savatgy launched his KX™450SR to an impressive sixth-place start and managed to move into a top-five spot by the completion of the opening lap. Unfortunately, further behind, Anderson was involved in a first turn pile-up that caused the No.21 to remount his bike outside the top-30. The New Mexico-born rider wasted no time slicing his way past slower riders, collecting one or two passes each lap as racing progressed. Savatgy battled for fifth in the early laps before settling into a rhythm within the top-10. A hard-charging Anderson was quick to reel in his teammate in the matter of a couple of laps and finished the job by taking firm control of eighth place by Lap 13. Anderson would cross the finish line in eighth after another heart-filled come-from-behind charge, meanwhile, Savatgy finished in ninth.

The second 450 Class moto began with Anderson emerging from the first turn in eighth with his teammate Savatgy close behind in 11th. Anderson worked his way into sixth by the start of Lap 2 and from there looked determined for a podium finish. The New Mexican brought the fans to their feet as he battled his way through to fourth with passes on consecutive laps. However, as the race reached the halfway mark, Anderson slowly faded back to sixth, where he would end up finishing the race. Savatgy was running comfortably in 11th position the majority of the race until the No.17 found himself engulfed in a battle for the position. Savatgy fought to hold the pressuring riders at bay for multiple laps and appeared to have the position secured until a mistake aggravated a lingering injury and forced the No.17 to finish the race in 16th. Anderson’s 8-6 moto scores earned the No.21 an eighth overall, while Savatgy finished with 9-16 moto finishes for 12th overall.

“I felt like I had the speed to be up near the front today. My Kawasaki KX450SR was hooking up great during qualifying and gave me a ton of confidence heading into Moto 1. Unfortunately, I got caught up in a first turn pile-up and fought back from 33rd place up to eighth. I got a much better start in the second moto but I was spent after having to fight so hard in Moto 1 that I had to ride smart and manage a sixth-place finish. Overall, I think we still had some positives come out from today.”
– Jason Anderson

“That was a tough race. My starts this weekend were okay, but there’s certainly room for improvement there. I think I showed everyone last weekend just how good I can be with a decent start. I want to try and focus on getting a little bit better on those so I don’t have to battle my way through the middle of pack early in the race and instead can gain more experience battling with the leaders on race day.”
– Joey Savatgy