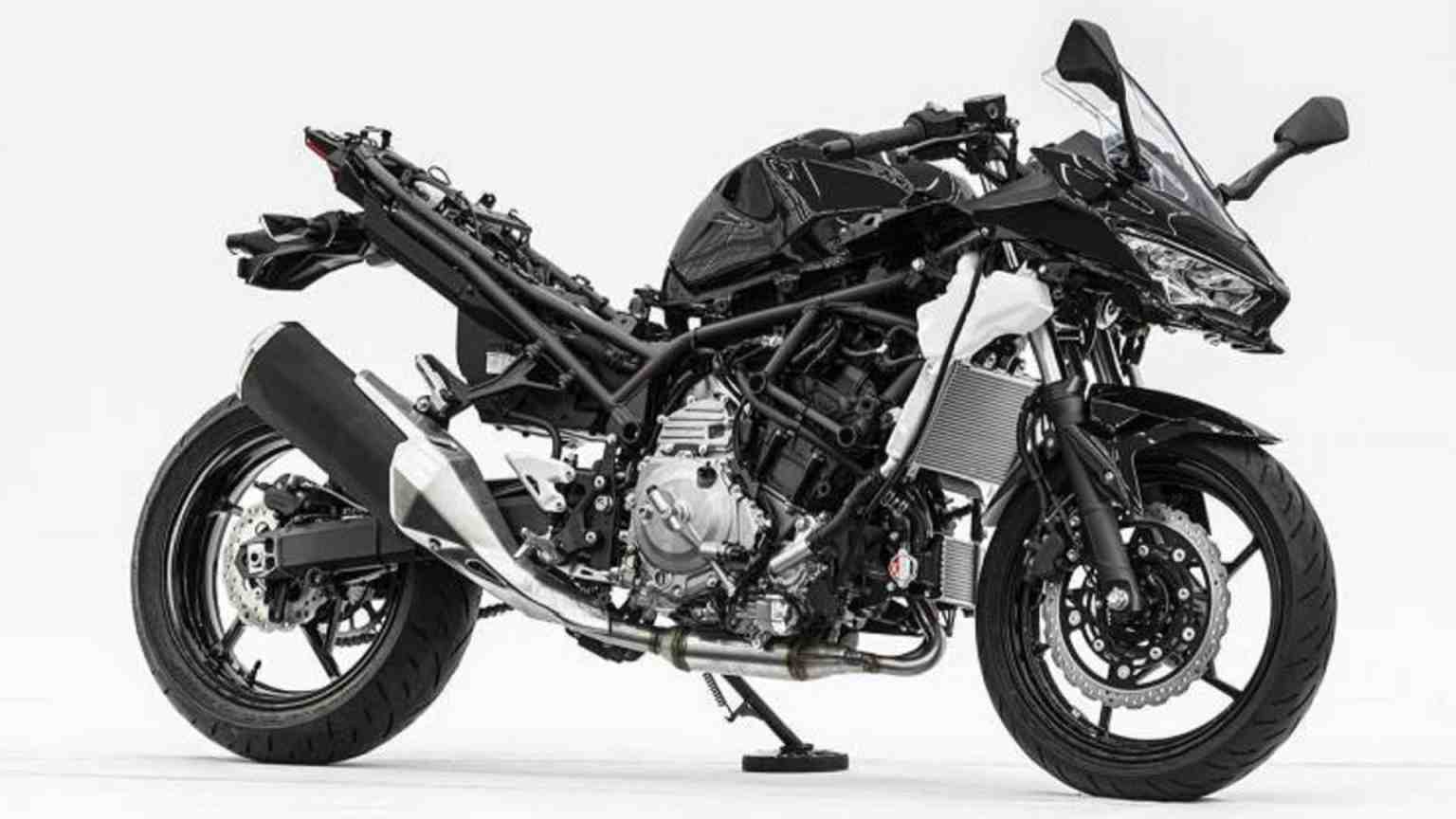 A peek behind the curtain/fairings.

We’ve been following Kawasaki’s hybrid motorcycle development since the firm filed patents in July, 2019. By November, 2021, Team Green gave us a peek at its progress with a short video laying out the philosophy behind the project. Then, an April, 2021, patent revealed Kawi’s new 48V hybrid battery design. Now, Kawasaki has pulled back the curtain (and the fairings) on its latest hybrid build while committing to a 2025 gas-electric hybrid production models.

Due to the chassis, front headlight configuration, and exhaust system, the prototype looks like it’s based on the Ninja 400. Kawasaki hasn’t officially confirmed our suspicions, but leveraging the entry-level sportbike aligns with current hybrid technology limitations. In automobiles, it’s easier for manufacturers to pair electric and internal combustion powertrains. In motorcycles, however, space is a much more limited resource. As a result, the firm couples its existing small-capacity parallel twin with a compact electric power unit.

From the beginning, Kawasaki has developed its hybrid project with the idea that riders would utilize the powertrains in different environments. The internal combustion engine suits highway riding, while the electric motor works best in urban environments. On a twisty road, both would work in concert to deliver the best of both worlds. It seems like the small-bore Ninja-based prototype would satisfy those requirements while also providing enough room to accommodate the new apparatus.

Of course, with two powertrains, the transmission will have to play nice with both systems, and Kawi’s automated gearshift smooths that transition. The new feature consists of an automated clutch, servo-powered shifter, and push-buttons for the user to operate. With so many European cities introducing zero emissions zones lately (and only more to come), the hybrid technology may be the perfect happy-medium between holding on to the range and convenience of gas-powered motorcycles while adopting cleaner and more efficient running powertrains.

For some, 2025 may be a long time to wait, but it’s encouraging to see Kawasaki’s project progress at such a rapid rate. Hopefully, we can say the same for the gas-electric hybrid’s acceleration when it hits the market in a few years.

Kawasaki has made some major announcements recently which reveals the intentions of the Japanese superbike manufacturer for the future. The bikemaker has revealed that by 2035, all its models would run on electrified powertrains- either fully electric or hybrid electric vehicles, in major international markets.

In regard to this idea, the company is planning to launch ten new fully electric and hybrid motorcycles by 2025. The first of them was recently showcased at a presentation meeting in Japan. The prototype revealed is slated to be the first hybrid electric motorcycle from Kawasaki.

However, this isn’t the first motorcycle with an electric powertrain to be unveiled by the Japanese brand. Earlier in 2019, Kawasaki had revealed the electric Ninja 300 Concept, called EV Endeavor. Later the same year, the company filed patents for a hybrid motorcycle, images of which floated on the internet. The recent prototype unveiled is expected to be based on the same patents.

Kawasaki Ninja 400 Hybrid Prototype – Details
Going by the images, Kawasaki appears to have used Ninja 400 as the base for the exposed prototype of the hybrid bike. It features a parallel-twin engine which is bolted onto a new tubular steel frame with a large electric motor mounted above the transmission. The electric motor derives its energy from a small 48V battery pack located under the seat.

As per Kawasaki, the hybrid powertrain is equipped with a regenerative feature that tops up the battery when low on charge. Another interesting aspect of this hybrid motorcycle is that within city limits, the bike would completely run on battery and electric motor, cutting out power from the combustion engine. This mode will be useful when some cities introduce zero emissions zones in the future.

Automated Transmission
The bikemaker has equipped the prototype with GPS technology that automatically switches to electric power as soon as the bike enters city limits. Outside the city limits, the motorcycle will draw energy from both the combustion engine and electric motor in order to boost its performance. The entire system is paired with an automated transmission system with buttons for gear shifts.

The setup comprises an automated clutch and a servo-operated shifter that enables gear shifts through push button changes. Other details revealed from the images include a pair of telescopic front forks and rear mono-shock supporting the tubular steel frame. Stopping power is provided by single disc brakes on both wheels while being linked to dual-channel ABS.

Although no exact timeline for its launch has been confirmed, we won’t be surprised if this motorcycle reaches production within a span of a year.