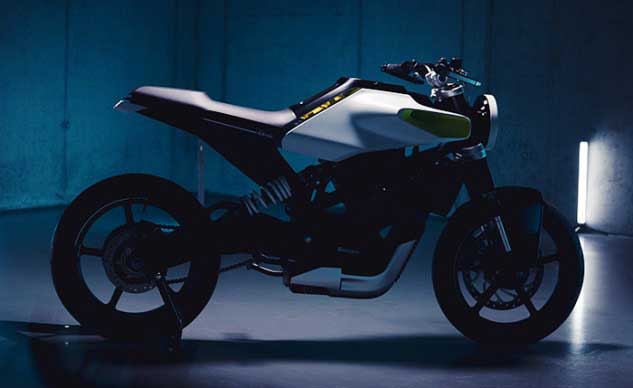 With every other OEM venturing into electric mobility space, we often get to witness new designs and advent of some new technology even if it’s minuscule. The latest manufacturer is Husqvarna who plans to enter the emission-free auto world with the production version of E-Pilen Concept revealed recently.

Based on the unique and pioneering design of successful twins- Svartpilen and Vitpilen, E-Pilen Concept is the Swedish bikemaker’s first step into urban electric mobility. The company has ensured that the production-spec electric motorcycle will bear stark resemblances to the concept version showcased.

Modern Design
The progressive design philosophy of Svartpilen and Vitpilen has been carried forward to the electric bike which features some distinct styling elements such as an exposed trellis frame, wide handlebars, a compact fuel tank and a round headlamp.

While a light paint scheme has been carried forward from Vitpilen, the tank rack has been inspired by Svartpilen. Other design elements included are inverted forks, mono-shock at rear, and a gullwing swingarm.

Expected Powertrain Specs
It should be pointed out that the fuel tank houses the electric battery setup. The battery supplies energy to an electric motor with a rated capacity of 8kW (10.73 bhp). Although exact details of the powertrain are yet to be revealed, the company claims a modest range of 100km on a single charge. However, Husqvarna has assured that it will address the range anxiety issues of consumers by equipping E-Pilen with swappable batteries featuring a modular system.

Official statement from the company read as “It has always been the aim of Husqvarna Motorcycles to develop new products accessible to the broadest possible spectrum of riders. The E-mobility range will retain and continue the riding pleasure and dynamics refined through the long history and experience of the brand.”

More Details
More details regarding E-Pilen will be revealed as the electric motorcycle nears its final production-spec version. Husqvarna’s Austrian cousin KTM has already ventured into electric mobility space with 5 kW SX-E and 16 kW Freeride E. If E-Pilen indeed undergoes production it can also pave the path for electric KTM Dukes. Motorcycles of both brands are manufactured at Bajaj’s manufacturing facility in Chakan near Pune, Maharashtra.

In fact, Bajaj and KTM have been working together on a common electric platform that will underpin products ranging from 3kW to 10kW electric motors using a 48V electric system. Also, it was reported a couple of months back that KTM and Husqvarna are developing an all-new electric scooter as well which will be based on Bajaj Chetak Electric. We can expect E-Pilen to be launched late this year or early next year.

Husqvarna announces a new concept for Electric Motorcycle
by Otilia Drăgan from https://www.autoevolution.com

Just as more car manufacturers are switching over to electric vehicles, well-known motorbike companies are also extending their line-up to include e-motorcycles. This year, we are definitely seeing a lot of innovative electric motorbikes being released, and that’s just the beginning.

Husqvarna is one of the brands that recently announced a new concept that’s on its way to being added to their successful motorcycle range. The E-Pilen model is actually intended to be the first of an entirely new series. The company has not yet revealed more details about what the E-mobility line will consist of, but it’s proof that they are serious about developing environmentally-friendly alternatives to classic models.

Fans were not given a lot of information about the upcoming E-Pilen model but, from what we can see so far, it resembles Husqvarna’s classic Vitpilen and Svartpilen in terms of design. The sharp silhouette, five-spoke wheels and retro-inspired round headlight are some of the elements that all of these bikes have in common. The company itself states that E-Pilen is meant to look as good as their most popular models, with the added benefits of electric mobility.

Aimed at “leisure riders”, the Husqvarna electric motorcycle would be ideal for regular commuting in urban environments. The company promises a 62-mile (100 km) range and an 8 kW power output for the electric model, that’s also equipped with a modular and swappable battery system. With E-Pilen currently under development, the motorcycle manufacturer is still considering various options as far as batteries, so we’ll know more about that in the future.

Since they are now appealing to a wider public who is interested in electric alternatives, Husqvarna also intends to extend their dealership network in urban and metropolitan areas.

According to their official statement,“It has always been the aim of Husqvarna Motorcycles to develop new products accessible to the broadest possible spectrum of riders. The E-mobility range will retain and continue the riding pleasure and dynamics refined through the long history and experience of the brand”.

E-Pilen will be launched in the near future, stay tuned for updates.