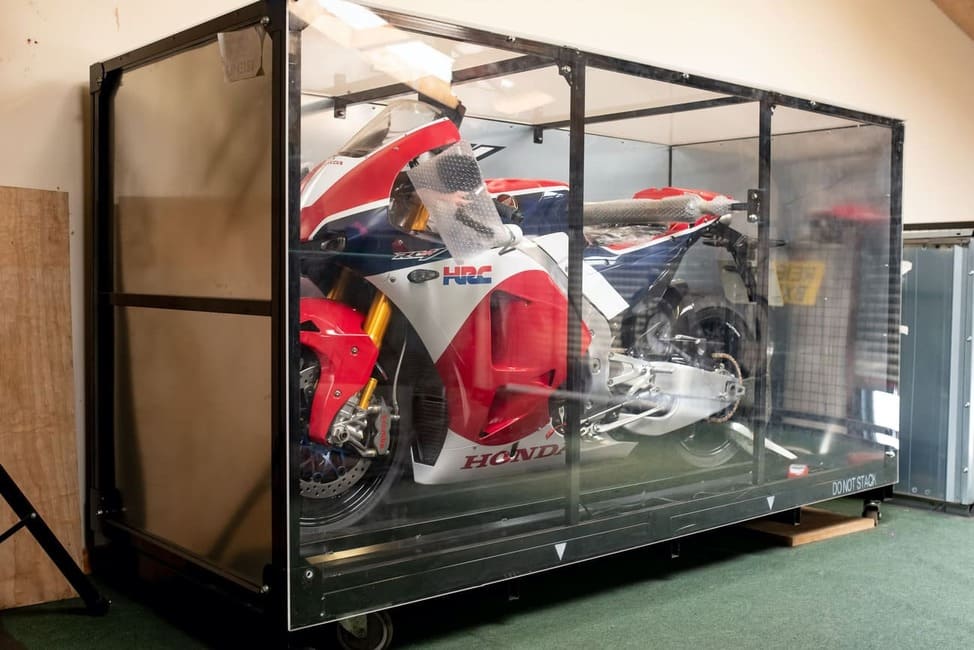 An as-new example of Honda’s RC213V-S has just broken a new world record, becoming the most expensive Japanese motorcycle ever sold at auction.

Hosted by specialist automotive marketplace Collecting Cars, the ‘MotoGP bike for the road’ sold for a remarkable total sales price of £182,500.

The rare superbike has never been ridden and remains in its original flight case, with just one mile on the odometer. Having never left its shipping crate, the bike is totally pristine with absolutely no damage or wear.

Created with a focus on light weight and agility, the RC213V-S is a road-legal MotoGP bike, built around a hand-fabricated aluminium frame with carbon-fibre body panels and titanium fasteners, resulting in a dry weight of just 170kg.

Powered by a 999cc four-stroke V4 engine, this 2016 model also features the full HRC Race Kit, which comprises a recalibrated ECU, a titanium exhaust system, a front ram duct, a race-pattern quickshifter, a data logger and a remote control cable for the front brake lever. These upgrades reduce the bike’s total weight by 10kg and increase power output from 157hp to 215hp.

“Honda’s RC213V-S is a thrilling, exquisitely crafted machine, and this example attracted global attention and extremely competitive bidding on Collecting Cars. We are proud to have achieved yet another world-record sales price – this time for an incredible road-legal MotoGP that will be a jewel in the new owner’s collection.”

To find out more information on this lot, visit Collecting Cars.
https://collectingcars.com/for-sale/2016-honda-rc213v-s-1

Compared to traditional car auctions, Collecting Cars offers significantly better value for sellers and buyers alike. For sellers, the detailed photographic presentation and professional descriptions mean their car is showcased in the best possible way, and is marketed to a huge captive audience of passionate enthusiasts. Furthermore, there is no listing fee, and they receive 100% of the hammer price.

For buyers, the premium on auction lots is levied at just 5% + VAT – substantially lower than traditional auction houses, which typically charge 12% or more – and is capped at £6,000. On hammer prices above £100,000 this means that the buyer’s premium is even less than 6%.

About Collecting Cars:
Collecting Cars is an online auction platform that curates consignments from around the world and markets them to a global audience.

The streamlined and transparent process makes buying and selling cars, motorbikes, and automobilia via its online auctions one of the most effective and hassle-free ways of transacting.

To date, the Collecting Cars platform has sold more than 5,300 lots, and total sales value generated for sellers exceeds £191 million. The multi-national auction company has headquarters in London, and offices in Munich, Sydney, and Los Angeles.

More than 90% of sales since launch have happened without a physical viewing, underscoring the significant trust that Collecting Cars has earned among its customers.