From the past: Honda PC800 Pacific Coast Motorcycle 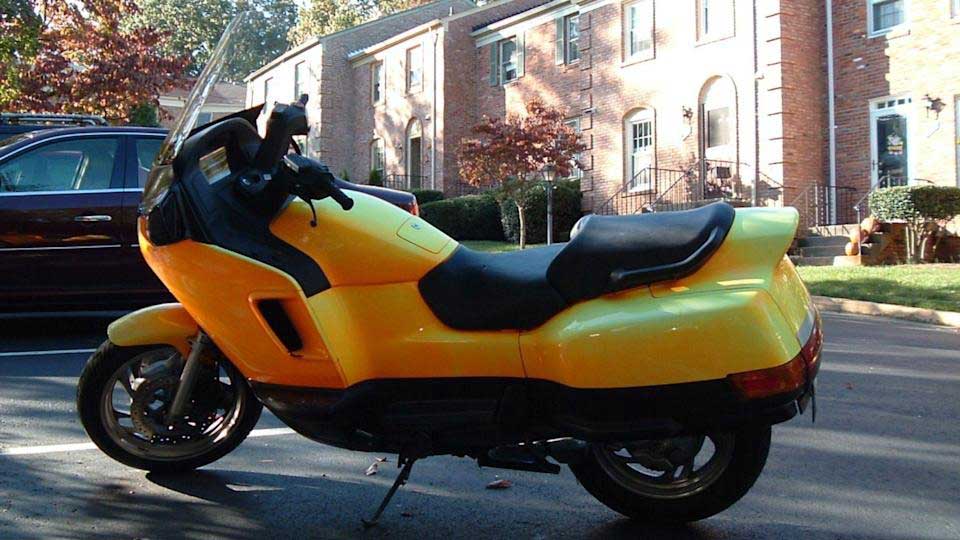 by Steven Symes from https://autos.yahoo.com

This is probably the weirdest motorcycle Honda has ever made, but is it collectible?

Quirky, weird, and car-like, the Honda PC800 Pacific Coast emerged for 1989 to woo people out of their Accords and onto two wheels. Amazingly, the bizarre touring motorcycle was manufactured through the 1998 model year, but many people today seem to have forgotten about it. If we didn’t know better, it would almost be like people have collectively tried to forget about the Pacific Coast. However, we figured now is a good time to revisit this now-vintage motorcycle and examine if anything about it could be considered desirable for collectors.

At the other end of the spectrum was the Honda Valkyrie Rune.

The origins of the PC800 go back to 1985 when Honda R&D Americas, Inc. was established in the name of efficiency. That characteristic is, after all, one of the main attractive elements of Hondas, so it seemed to make sense. That meant the same people were developing cars, motorcycles, and other Honda products. We know, we know, the jokes practically write themselves but we’ll leave it at that.

Perhaps the most bizarre products of this shift in strategy was the Honda PC800. Designed as a motorcycle for people who prefer cars, the design was friendlier and more approachable than what you would find with a Harley, Ducati, Suzuki, or even another Honda motorcycle.

The press for the most part were wowed by the PC800. It was portrayed as innovative, forward-thinking, and further testified to the master genius of Honda. Most definitely it was a gamble made at a time when the US economy was strong and companies were more willing to stick their necks out to take a gamble. After all, Honda risked losing a lot of its credibility with motorcycle riders for making such a soft, strange, car-like tourer.

For motorcycle enthusiasts, the PC800 Pacific Coast didn’t have much to offer. After all, it didn’t pack much power, thanks to it borrowing the V-twin from the 1988 Shadow VT800. The upswing was these rides were extremely low-maintenance, with features like automaker tensioners for the chains and hydraulically-adjusted valve clearances. To combat the vibrational tendencies of the 45-degree V-twin engine, Honda engineers not only used offset crankpins, they used four rubber mounts for further damping. After all, car people don’t like to feel that rumbling underneath them.

To make the Honda Pacific Coast even more approachable, engineers added a 5th gear to the VT’s transmission. Power was sent to the rear wheels via a driveshaft, too. A full-cradle frame with 2 rectangular spars on either side of the engine meant more cornering clearance, eliminating a riding difficulty literally felt by many 2-wheel newbies.

What really makes the PC800 car-like is the bodywork. Unlike most motorcycles, this Honda was clad from wheel to wheel is molded plastic. That large rear allowed for a car-like taillight strip. Plus, the rear was hinged, giving riders access to 2 storage compartments, hence it was called The Trunk. A hydraulic shock kept the lid open, just like what Honda owners were used to with their hatchback Civic or Accord.

All that plastic cladding around the engine added to the difficulty of performing maintenance on the PC800. Sure, it looked good to the car people and maybe it made the bike a little more aerodynamic, but when you had to change the oil, pull plugs, or do anything else, all that acreage of plastic was a pain.

Not everything about the Honda PC800 Pacific Coast was bad. In fact, there were some genius designs like fairing guards and pop-off mirrors to reduce the risk of damage if you tipped over the bike. The trunk was made to the watertight, so you can ride this bike through all kinds of nasty weather and not have to worry about your luggage getting soaked.

Honda went big on price for the PC800, charging $7,700 when it debuted in 1989. Americans were feeling playful then, gobbling up the majority made for the debut model year. However, a recession in 1990 cut sales in half. That prompted Honda to pull the motorcycle from the US market, only to bring it back for 1994 once the recession was squarely in the distance. However, sales never came even close to the over 7,000 units sold in 1989, with under a thousand sold most years until Honda finally gave the Pacific Coast the ax after 1998.

This means there aren’t too many PC800s out there. There’s a cult following for these motorcycles, with many former owners pining away after theirs. However, prices don’t indicate these have caught the eyes of enthusiasts or investors, which is good news for those who want to scoop one up for a good deal. At the moment it seems doubtful these Hondas will ever become serious collectibles, but they are an interesting specimen of an experiment by the Japanese brand.