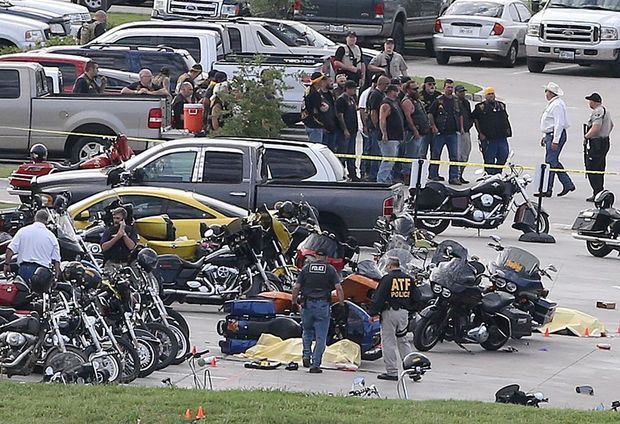 A Twin Peaks shooting survivor says he trying to rebuild his reputation after he was one of the bikers arrested at the Waco restaurant in 2015.

Friday marks four years since the deadly shootout at the Waco Twin Peaks.

“This was a scheduled meeting,” said Paul Landers.

Landers said he got to the restaurant early that day to set up for a meeting about biker profiling, recent biker legislation and their rights on the road. “That day was different because there were people there that never participated at all in what we do,” he said.

Nine people were killed and at least 20 were critically injured. If you were there as a biker, chances are you were arrested by Waco Police.

Landers was one of them. “That incident happened 12:30, one o’clock. We were on the hot concrete in 97-degree weather until five that evening. People (were) looking for a restroom. It was total chaos. You don’t know what’s going on, who’s involved. Then we sat on the bus until midnight. I was in handcuff until midnight, plastic cuffs,” he said.

Landers said he spent the next 23 day in jail. He along with 177 others faced felony charges — engaging in organized criminal activity, resulting in murder and aggravated assault.

Charges for Landers were dropped three years after his arrest. In early April, the remaining charges were dropped after a new DA took office.

Landers said his life still hasn’t been the same since his arrest. “I’m not a criminal,” he said.

Before the shooting, Landers said he worked for a well-paying company but was terminated within a week after his arrest. He said the reputation he built as an advocate for biker safety with policy makers at the state Capitol started to diminish. “If you want to single out the bad deed of a couple, but don’t indict the whole group on the actions of few,” he said.

Landers is now part of a civil suit suing the former McLennan County District Attorney, Waco Police and the detective that signed off on the affidavit. He said he’s not suing for financial gain but to prevent bikers from being profiled like he feels they were on May 17, 2015 in Waco.