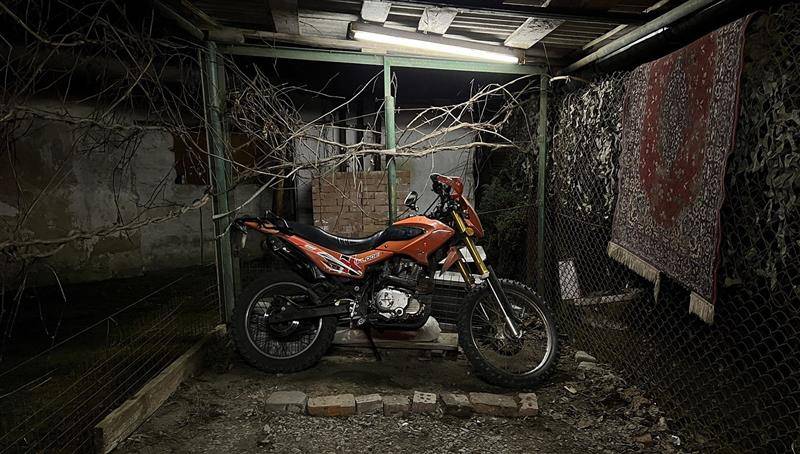 This is Photojournalist Kiran Ridley’s secondhand, 200 cc, Chinese-built motorcycle he relies on to get around in Ukraine. Second-language issues could be blamed for the Xplode name written on the side panel — something you don’t want your motorcycle to do, especially in a war zone.

From the Common Thread Team
by Neale Bayly of RevZilla

Editor’s Note: I discovered this story on Common Thread the ZevZilla web site. I hope they don’t mind Bikernet sharing this with our readers. You should go to their site to see Ridley’s moving photos.–Bandit

Simple things at first about his motorcycle: a badly wobbling rear wheel and a high idle speed, along with the machine’s refusal to run without the choke engaged. As a motorcycle journalist, I am surprised the motorcycle is not known to me. It’s an odd 200 cc single-cylinder, four-stroke machine that “rides like shit — you are fighting it all the time,” he tells me.

The circumstances of how he acquired the machine are fascinating, as he tells me about a chance meeting with a heavily tattooed pizza delivery rider that led to a conversation and an opportunity to purchase the delivery rider’s second motorcycle. It took just a few calls, a meeting, and with an exchange of cash the deal was done. Ridley was mobile.