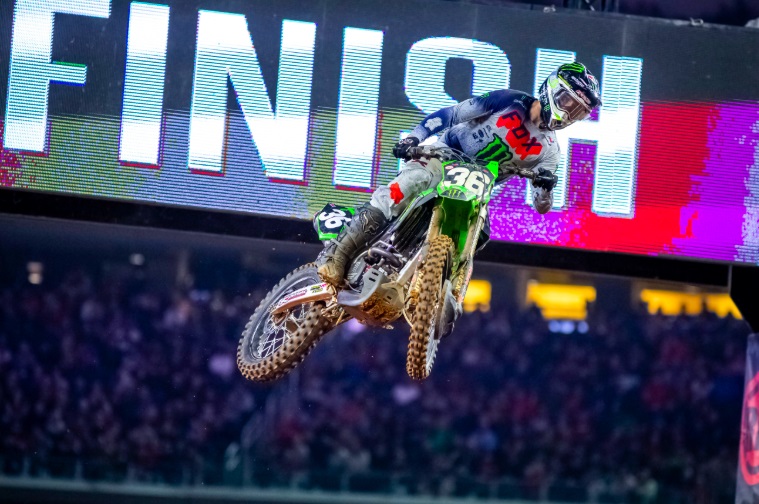 Rookie Adam Cianciarulo and his teammate Eli Tomac looked to once again top the charts of qualifying for the eighth week in a row, however, his day would be cut short after crashing during the first practice. Cianciarulo suffered a broken collarbone from the incident and was forced to sit out for the night.

As the gate dropped on the first race of the three-race Triple Crown format, Tomac found himself buried outside of the top-10 at the end of lap one. Tomac, using the power of his KX™450 motorcycle put his head down and spent the next 12 minutes charging past his competitors and worked his way into fifth place. This championship-caliber push would ultimately pay dividends later in the evening.

450SX Main Event 2 saw the No. 3 of Tomac sneak inside the competition at the end of the first corner and he went on to lead every lap of the second race. His 5-1 finishes going into the third and final moto put Tomac just one point back of the overall lead.

Similarly, to the second Main Event race, Tomac snuck inside once again, however, he was not able to capitalize in the opening corners and would cross the line in sixth on the first lap. With the Olympic style scoring to the Triple Crown format, every position ahead of Tomac would ultimately determine the fate of his overall result. Tomac was not going to be denied on the evening and spent the next several laps tirelessly clicking off competitors one by one and on lap 13 he was able to make a pass for the lead stick. Tomac’s 5-1-1 finishes was the lowest total score off all competitors, earning him the evenings overall win.

This marks Tomac’s second 450SX win in Arlington and his 31st career win. Tomac has now won four of the eight races this season, and further extends his championship points lead to seven markers over second place.

“We showed that we could fight and overcome adversity tonight. To be completely honest, I just got a bad start and struggled to find any rhythm in the first main event. Once I got into fifth place I kind of just got tight and couldn’t go forward after that. But I was able to quickly regroup with the team, and in the next two main events, we had a much better gate pick each time and were able to control the races from there. I am just happy to be leaving here healthy. We raced something like 50 laps tonight and as you saw, the track took out a lot of key dudes. I am glad we’re through it and looking forward to Atlanta next weekend.” – Eli Tomac 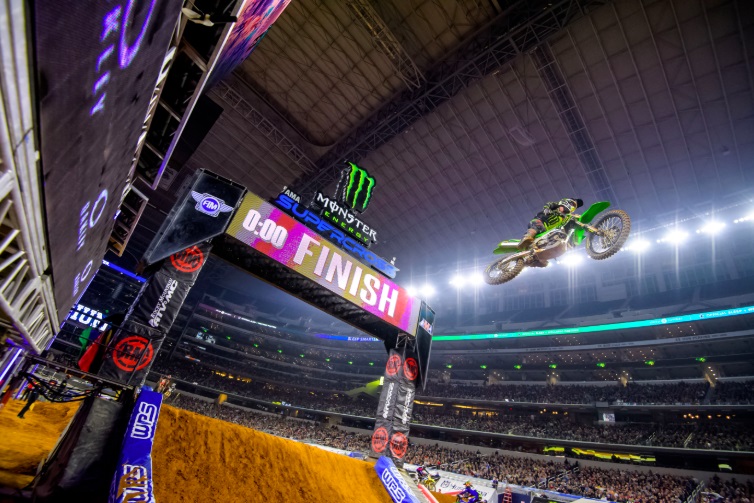 This weekend marked Round 2 of Monster Energy AMA Supercross series for the 250SX East Coast Championship, where Monster Energy/Pro Circuit/Kawasaki riders Garrett Marchbanks and Jordon Smith would partake in their first Triple Crown event of the season. It was Marchbanks consistency that would pay off with a top-5 finish for the second week in a row.

The Monster Energy/Pro Circuit/Kawasaki duo kicked off the day by Marchbanks qualifying in fourth and Smith in eighth.

The 250SX Main Event 1 saw the No. 54 machine of Smith rocket his KX™250 out of the gate and secure the holeshot. Smith would spend nearly the entire moto jockeying for a podium position, however, a competitors’ aggressive move late in the race sent Smith off course and he would finish in fourth place. Marchbanks had his work cut out for him as he found himself well outside the top-10 off the start of the race, but not to be outdone, Marchbanks charged all the way up to salvage a sixth-place finish.

As the gate dropped for the 250SX Main Event 2, it was once again Smith who nearly nabbed the holeshot but he got bumped by a competitor which shuffled him back to the back of the pack in the second turn. Smith worked his way up through the field but contact with another rider knocked him off his bike and he finished the race in 20th. Similarly, to the first main event, Marchbanks charged through the pack and just narrowly missed the podium with a fourth-place finish.

Consistency was the key to Marchbanks’ success on the night, as he would finish the final moto in fifth place, giving him scores of 6-4-5 which earned him fifth overall. Marchbanks currently sits in fifth place position in the 250SX East Championship Point Standings. Smith crosses the finish line in 14th and finished the evening in 13th place overall sitting seventh place in the point standings.