Design and styling of the Triumph Project TE-1 electric mototrcycle 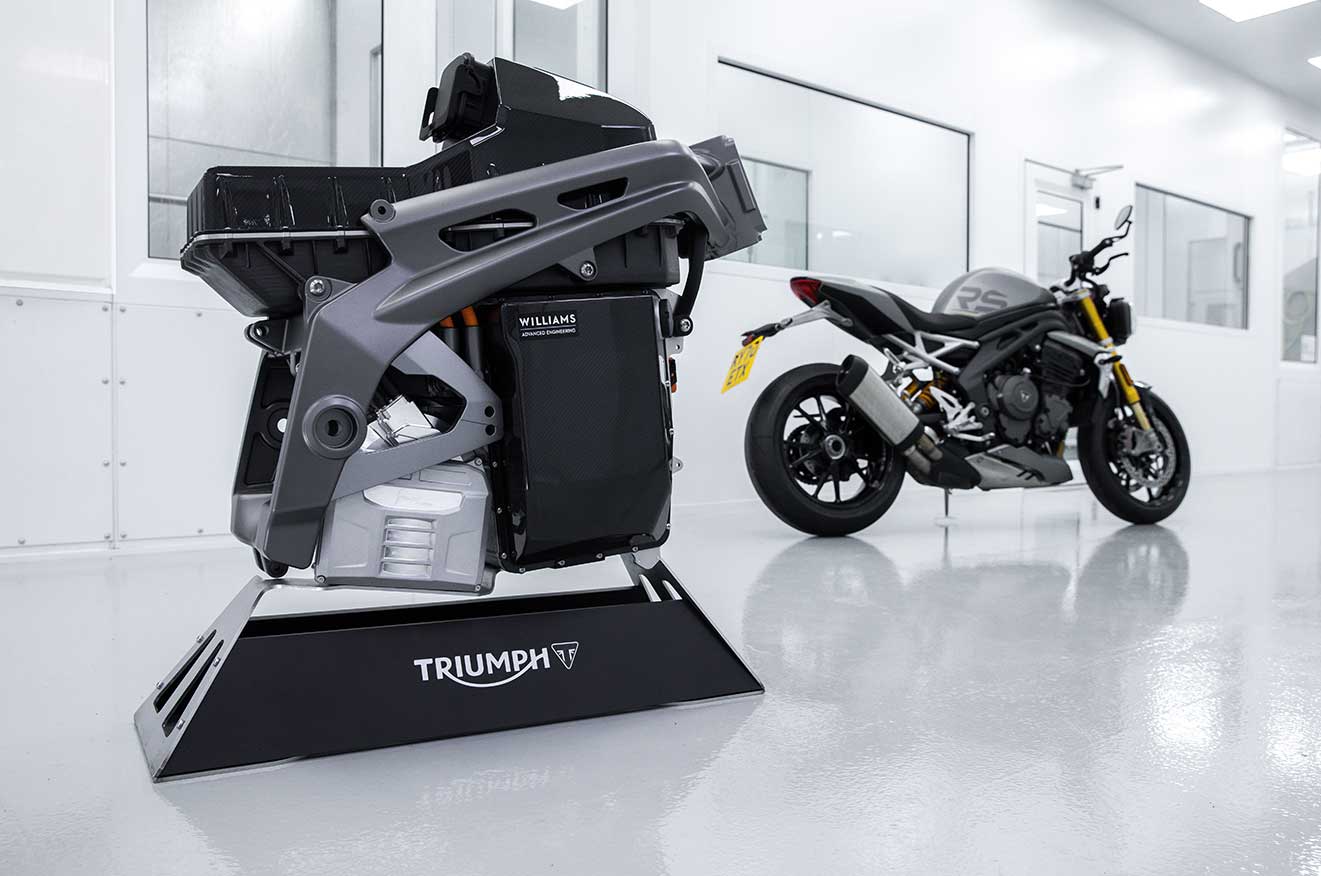 The design and styling of the Triumph Project TE-1 appear heavily inspired by the 2021 Speed Triple 1200 RS, however, it will not simply be the Speed Triple with an electric powertrain, but an all-new bike built from scratch.

Having been announced back in 2019, Project TE-1 is now beginning to take steps towards completion with the official revealing of the design sketches of Triumph’s upcoming electric motorcycle and also the prototype of its powertrain and battery. Delivering on the objectives announced at the start of the TE-1 project in May 2019, focused on developing specialist electric motorcycle technology and integrated solutions, the collaboration between Triumph Motorcycles, Williams Advanced Engineering, Integral Powertrain Ltd, and WMG at the University of Warwick funded by the Office for Zero Emission Vehicles, today took the wraps off its achievements so far.

Triumph has announced the completion of Phase 2 with the reveal of the battery and powertrain prototype, initial performance results and the first design concept drawings for the Project TE-1. The prototype of the motorcycle will be unveiled sometime by the end of this year.

The design and styling of the TE-1 appear heavily inspired by the 2021 Speed Triple 1200 RS with a similar headlamp, suspension and single-sided swingarm. However, the Project TE-1 will not simply be the Speed Triple frame bolted with an electric powertrain, it is being built from the ground up.

The British manufacturer states that test results show significant innovation in mass, battery technology, and powertrain performance that exceeds the target set by the UK Automotive Council for 2025.

“This important project will provide one of the foundations for our future electric motorcycle strategy, which is ultimately focussed on delivering what riders want from their Triumph; the perfect balance of performance, handling and real world usability, with genuine Triumph character,” Nick Bloor, Triumph CEO, said.

Integral Powertrain’s e-Drive division will lead the development of bespoke power-dense electric motors and a silicon carbide inverter, integrating both into a singular motor housing.

WMG at the University of Warwick will provide electrification expertise, and the vision to drive innovation from R&D to commercial impact. Innovate UK will support the partners and administer funds.

Back in May 2019, Triumph Motorcycles announced that it is working on an electric sportsbike project called TE-1 as a part of a joint research project funded by the Office For Zero Emission Vehicles, Government of the UK. Fast forward to the present day, phase 2 of the 4-phase project has reached completion, and the British marque has unveiled the electric powertrain prototype in addition to design sketches of the Triumph TE-1 electric motorcycle.

Triumph TE-1 – An Overview
The Triumph TE-1 project is being developed in collaboration with Williams Advanced Engineering, Integral Powertrain Ltd, and WMG of University of Warwick. The project is is a part of Innovate UK program run by the government, has already exceeded the targets set by the UK Automotive Council for 2025.

The phase 2 involves developing and testing the critical components of the motorcycle such as the battery, motor and vehicle control units. The end of phase 3 will involve realizing a full functional prototype of the motorcycle which will be used in phase 4 for final validation process.

Puny Yet Powerful AC Motor
While detailed specifications of the powertrain are still under wraps, we know that the new innovative AC motor developed by Integral Powertrain’s e-Division weights only 10 kg and produces a staggering 180 hp (130 kW), making it one of the best units in the motorcycle business in terms of power density. The company has worked on integrating the motor and inverter into a single unit so as to improve packaging and reduce mass.

Compact Battery Pack
Williams Advanced Engineering spearheaded the development of the Triumph TE-1 project’s battery module, battery management system and vehicle control unit. The system is heavily optimized for mass, performance, ideal location of center of gravity to enable sharp handling, and ease of recharging. The performance specifications of the battery is still under wraps but Williams says that the unit offers the best-in-class power and energy density, and has been successfully validated on test bench.

Advanced Modelling and Simulation
WMG at the University of Warwick brings its academic might to this joint research and development program. The university team has been working on model-based engineering techniques to aid the whole development process.

During phase 1 various models simulating the behaviors of motor, battery, control systems, etc., were developed to aid in selection and sizing of right kind of critical systems. The fidelity of the models of each sub-systems were improved during the second phase to aid the partners in optimizing the performance of the high-performance pure electric powertrain. The university also realized a Hardware-in-loop (HIL) test rig to validate the motorcycle’s various control units.

Triumph’s Contribution
Triumph Motorcycles focuses on developing a new chassis and rear sub-frame to underpin the modern electric motorcycle in addition to coming up with a fitting design. The company also developed the fully digital colour instrument console and software for the vehicle control unit by integrating functional safety measures that is required for the final version to be homologated for road use.

The styling is an evolution of the brand’s street fighter design with the quintessential two-piece headlamp design. The Triumph TE-1 project is expected to be completed sometime in 2023. More details are expected to be released as the joint research project reaches the end of phase 3.