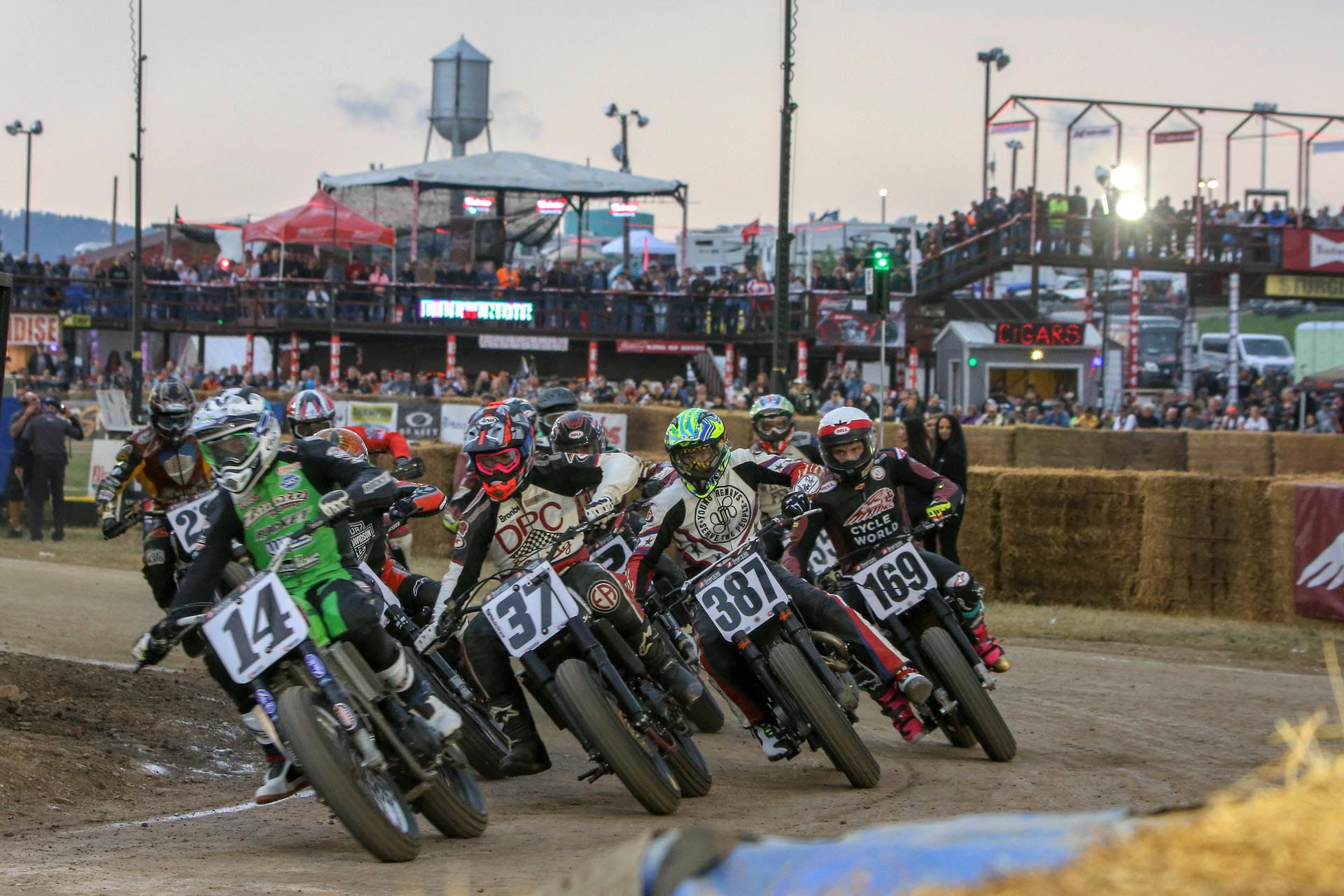 A relatively recent addition to the legendary Sturgis Motorcycle Rally, the Buffalo Chip TT has already established itself as a highlight of the massively popular 10-day event. Originally conceived as ‘a race that broke out at a rock concert,’ the TT has proven to be exactly that, as the heroes of AFT will set the stage for Godsmack this year in its third annual running.

Some 10,000 raucous fans are again expected to line the fences of the purpose-built TT circuit that winds its way around the legendary Sturgis Buffalo Chip Campgrounds. Those fans will be expecting plenty of drama and excitement and the race has historically delivered and then some.

The Buffalo Chip TT has a tendency to spice things up with a bit of podium variety, including last year’s AFT Twins presented by Vance & Hines victory on the part of Jake Johnson (No. 5 Estenson Racing Yamaha MT-07 DT), and the ‘17 triumph of Briar Bauman (No. 14 Indian Motorcycle/Progressive Insurance FTR750) — coming at a time when that sort of success was a bit less the norm for the AFT Twins championship leader.

Two riders who may be poised to deliver an upset are Sammy Halbert (No. 69 Harley-Davidson Factory Flat Track Team XG750R Rev X) and Bronson Bauman (No. 37 Indian Motorcycle/Progressive Insurance FTR750); both men have shown to be strong at the Buffalo Chip event in years past.

Last year’s podium also featured Jacob Lehmann (No. 14 Vince & Denise Holt Honda CRF450R) and his teammate Cole Frederickson. While Frederickson is on the long road to recovery following a serious training accident, both Sipes and Lehmann will be back to give the Roof Systems AFT Singles’ regular fits again in 2019.

Directly following the AFT Twins podium ceremony, Godsmack — the iconic metal band with multiple Grammy nominations and a Billboard Rock Artist of the Year Award to its name — will unleash its particular brand of musical aggression to cap off the evening.

The Buffalo Chip TT and Godsmack performance are just two of a huge number of attractions at the Buffalo Chip during this year’s Sturgis Motorcycle Rally. The venue will also host the likes of Skid Row, Keith Urban, STYX, Snoop Dogg, Toby Keith, Zakk Sabbath and legions of other diverse and popular musical acts, along with nine bike shows, ongoing stunt performances, BMW demo rides and much more.

Buffalo Chip TT tickets are on sale now at www.rallytickets.com. Race-day campground admission tickets are $72 and include free access to Buffalo Chip entertainment and activities unless otherwise noted as a separately ticketed event.

Be sure to catch the feature broadcast of the Buffalo Chip TT presented by Indian Motorcycleas part of a two-hour block on NBCSN that will also include flag-to-flag coverage of the Black Hills Half-Mile presented by Law Tigers. The back-to-back broadcasts will debut on Saturday, August 10, at 1:00 p.m. ET/10:00 a.m. PT and re-air on Wednesday, August 14, starting at 3:00 p.m. ET/12:00 p.m. PT.

To get the latest American Flat Track clothing and merchandise visit www.americanflattracker.com.

NBCSN and FansChoice.tv are the official homes for coverage of American Flat Track. For the 2019 season, NBCSN’s coverage of AFT moves to highly-coveted, weekend afternoon programming slots within two weeks of each event. The complete schedule for AFT on NBCSN can be viewed at http://www.americanflattrack.com/events-nbcsn/. FansChoice.tv remains a cornerstone of AFT’s digital strategy, providing live streaming coverage of every event on AFT’s live page while previous events and exclusive features are available on AFT’s VOD page.