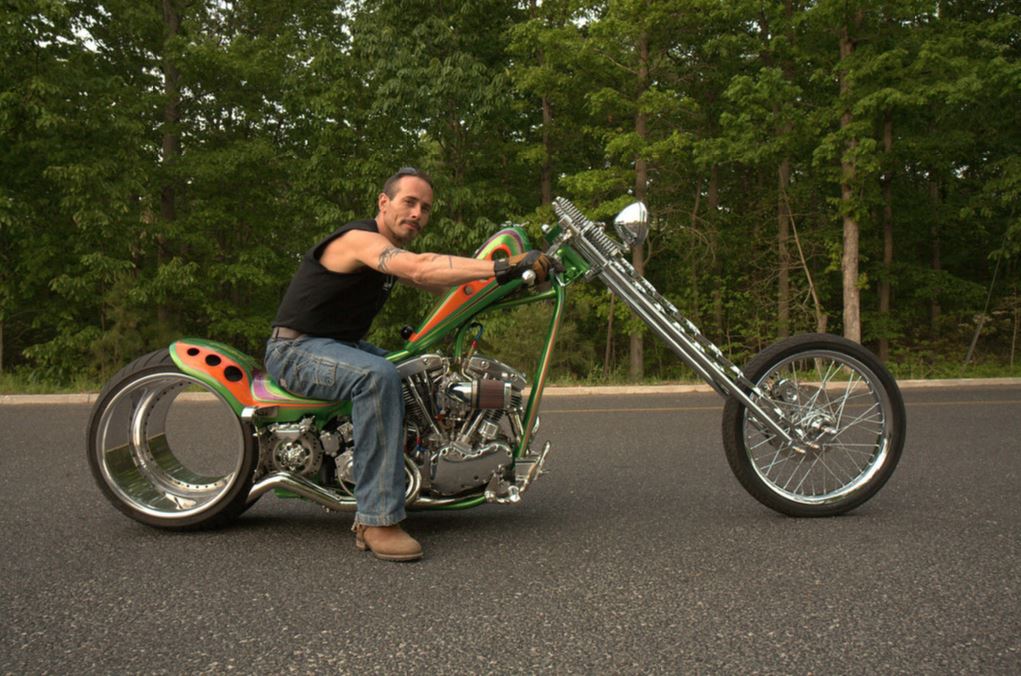 For most riders, a Harley-Davidson is beautiful on its own and, if you add the growl of the engine, there’s enough happening to get attention. But there are other ways you can stand out even more, should you be interested.

Hubless choppers are one such option. They are futuristic, almost alien-looking custom bikes built by hand around a Harley-Davidson frame, with wild-looking paintwork and at least one spoke-less wheel. Invented by Franco Sbarro and most famously used on the 1989 Sbarro Osmos, the center-less wheel is difficult to make, difficult to maintain and has many practical disadvantages.

But it’s bound to get you noticed.

Perhaps the first, most famous chopper to get international media attention is the Hubless Custom by New Jersey-based Howard’s Killer Custom, which was unveiled in late 2007 and is believed to have cost no less than $155,000. It is usually included on lists of most expensive motorcycles in the world.

It partially started out as a classic 1969 FL Harley-Davidson, which, in the hands of Howard Sofield, became the most famous hubless chopper in the world. Weighing about 700 pounds and able to reach speeds of 100 mph, the Hubless Custom took 4,000 hours to make and two full years of research and design.

According to Sofield, the Hubless Custom started out with a 1974 swing arm frame and a 21-inch front wheel, the 1969 Harley-Davidson Pan Shovel 80ci engine, 1969 & 1974 Harley-Davidson engine cases, and 1982 Harley-Davidson cylinders. The goal was to make the hubless wheel more practical and to create a fully functional bike in-house.

“Using my experience in drafting and automotive industries I was able to come up with a different way to make the hubless wheel work in a more practical way,” Sofield said upon the bike’s introduction. “Combining that with my Father’s extensive machining and fabrication skills, we are able to create our bike entirely in-house and do things that most every other builder would have to outsource. Over 4,000 hours of design and build time went into this project and we could not be happier with how it turned out. It looks and functions perfectly.”

The downside to this hubless chopper: it is difficult to handle.

Some years, later, in 2014, Ballistic Cycles unveiled their own take on the hubless chopper, this time with a spoke-less front wheel and a rear so low it almost grazed the ground. Called the Hubless Harley-Davidson Road King, it won several prizes right after introduction, including Baddest Bagger at Full Throttle Saloon, Deadwoods Nastiest Bagger and Best in Show at the Easy Rider Saloon.

Ballistic Cycles never went public with how much one such Bagger cost.

But the Road King is a stunner, as you can see in the gallery attached. Ballistic Cycles boasts of being the first custom team to put a 30-inch front wheel on a bike – and a spoke-less one, at it! Add the all-aluminum body with the wickedest paintwork and a twin turbo Harley-Davidson air / liquid-cooled engine, and you get yourself one visually arresting machine.

“Cutting necks and adding a few glass parts is one thing, but truly building a ground-breaking motorcycle takes a bit more time, effort, and a planning,” the official website reads. “The entire front end is completely one off and each and every part is custom for this feature. The hubless wheel is machined from a solid piece of billet, and the brake system is integrated into the wheel. The custom air cylinder is designed specifically for the load endured by the wheel and motorcycle. The mechanics behind the hubless wheel features all the latest technology and completely pushes the boundaries of what is possible.”

The good news: Road King was the first of a long line of similar projects, and Ballistic Cycles is still making and selling hubless Baggers. Any rider with deep enough pockets can get a chopper that will make them get all the attention on the road – and then some.