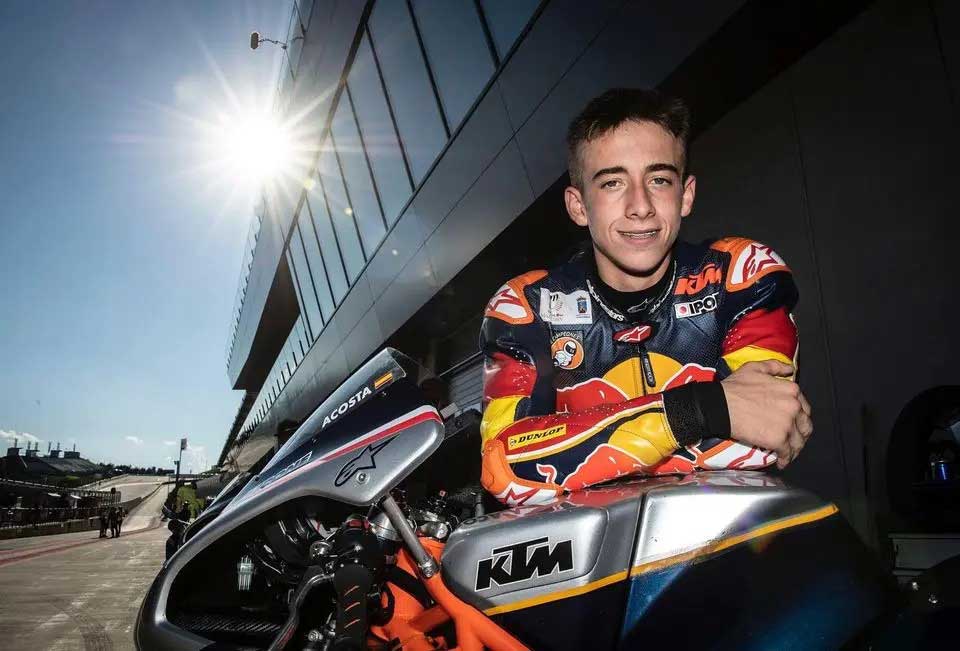 by James Warren from https://www.theolivepress.es

SPAIN has often been called the mecca for motorcycle racing, with world champions being cultivated from the moment they can sit on a bike.

Household names like Marc Marquez, Aleix Espargaro and current champ Joan Mir all started riding and racing while they were at school, making use of Spain’s love of two wheels to develop their talents unhindered.

As these riders fight to earn their latest victories in 2021, they all have one eye on one name that is causing waves in the Moto3 World Championship.

And that name is Pedro Acosta, a young 17-year-old from Mazarron, Murcia.

So far in 2021, the young man has taken three victories and one podium in the first four races, shattering records for the 250cc class and leaving experts to hail him as a ‘future legend’.

But how has this teenager become one of the most exciting prospects since Marc Marquez arrived on the scene back in 2008.

The answer can be found at the Circuito de Cartagena, a race track six kilometres northwest of the popular resort.

The circuit is popular with trackday riders, people who own motorcycles who rent sessions on the track to hone their skills.

Acosta’s father, also Pedro, was one such rider, with a love for American legend Kevin Schwanz, and eager for his son to inherit his love for two wheels.

“Dad had a Suzuki like Schwantz’s and I grew up looking at the photos and videos of him.” said Acosta in an interview with Spanish publication Marca.

Acosta’s father, keen to see his son carry on the mantle, give him a €150 Chinese Motina bike at the age of five, and brought him to track days at the Cartagena circuit to watch his father ride.

“At first he was not interested, spending more time playing rather than watching, but he soon began to become intrigued to what I was doing.” said his father.

Acosta enrolled into a youth development program at the track ran by early mentor Francisco Marmol, a name that would become an integral part in Acosta’s rise to stardom.

“He would always be at the track with his father, and after a few years we enrolled him in our program, like an after-school club for riders.” said Marmol.

“He developed a taste for it very quickly, and grew a strong bond with me, he listened very intently and it became apparent that he had no fear.”

“He was open to experiment and try new things that I suggested. Some people say they can see a natural talent in children this age but it is not true, it is too early. But Acosta was always ready to learn, and enjoyed every moment, and that was the key.”

The son of a modest fisherman and a mother Mercedes, who didn’t care for racing, Acosta, with the help of Marmol and the KSB Federation, entered numerous national championships as soon as he was old enough, and won the Pre Moto3 championship in 2017.

His stint in the CEV gave him the confidence to apply for the Red Bull MotoGP Rookies Cup, the official starter class for the MotoGP championship and a place where teams scalp for potential talents.

Acosta made the cut, and in 2019 he began his first foray into international racing.

He impressed, taking three victories and five podiums on the way to a second place finish after 12 races.

In 2020, Acosta remained in the Rookie’s Cup and claimed an unprecedented six straight victories and a further three podiums to take the championship n his second attempt.

His performance got teams talking, and for 2021 Acosta joined the Austrian Red Bull Ajo KTM team on the factory KTM RC250, colours that would propel him into the eyes of the world.

The current crop of riders are already heaping praise on the Spanish youngster, but are concerned that his rapid rise to stardom could be his downfall.

“It is clear that he can become a champion, he has the talent, but he has to surround himself with the right people.” said 2020 champion Joan Mir.

This is a sentiment that is echoed amongst the other riders, with Franco Morbidelli and Marquez all offering words of wisdom to the 17-year-old.

“He must be left alone to enjoy his time on the bike, to concentrate on his development and not be forced to advance to quickly.” said Marquez.

Marquez is referring to rumors that Acosta is already being touted for MotoGP ride, skipping the intermediate Moto2 category altogether, a move that has concerned many.

“Moto2 is a valuable stepping stone, you learn a lot from 675cc racing machinery that you can’t pick up from Moto3, or even training on larger bikes.” said Mir.

“As Pecco (Bagnaia, current Ducati rider) said, two years in each category is sensible, it is important not to rush. It is clear he is something special but he must do what is best for him not what is best for the teams or promotions.”

What Acosta does next year is uncertain, but from humble beginnings he has gained admiration from not only his childhood heroes, but also racing fans across the globe.