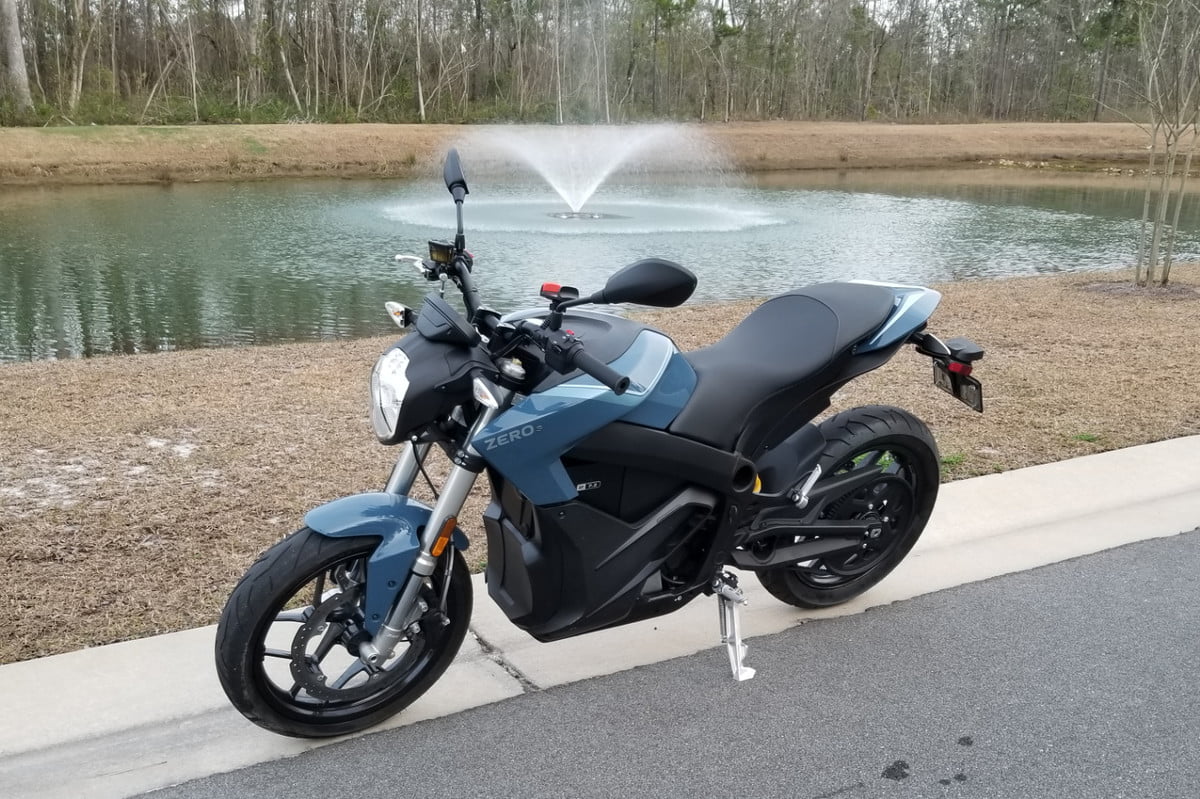 by Bruce Brown from https://www.digitaltrends.com

Pros
A mature e-motorcycle design
Excellent driving per charge range
No gears, no clutch, no shifting
Powerful brakes and suspension
Inexpensive to fuel and maintain

Zero Motorcycles‘ 2020 Zero S is the most highly-evolved version of a vehicle with the longest production history in a product class that most people don’t know exists. Most people would be surprised to learn electric motorcycles are on the street today. They’re even more surprised to hear the first arrived over 12 years ago.

Founded in 2006 by a former NASA engineer, Zero Motorcycles’ first production model was the 2009 Zero S, making 2020 its 12th model year. Depending on the buyer’s choice of installed power pack, the Zero S price varies from $10,995 to $18,390. The most powerful (and expensive) Zero S has a 223-mile maximum city driving range.

I asked Zero Motorcycles to suggest which model in its nine-model 2020 lineup would be the best choice for an e-bicycle rider who wanted to pick the Zero as their first motorcycle. After discussing the lighter, taller, more off-road-bike-looking Zero FXS, I decided on the Zero S with the lowest power battery pack. I tested the base 7.2 kWh Zero S, priced at $10,995, which the company describes as “ideal for the first time rider looking for an entry-level street motorcycle.”

The 2020 Zero S base model ticks the boxes for e-motos. Acceleration is immediate with the S’s full torque on tap from a standing stop. Other than tire noise and a slight whirring sound from the carbon fiber drive belt, the bike is quiet. There’s no clutch and no shifting because there’s only one gear. So, as with most electric motorcycles, you don’t need to know how to use a manual transmission to ride it.

To ride the Zero, just turn the key and wait a few seconds for the indicators on the display panel to settle down. Zero includes two throttle intercepts to protect riders from unintentional acceleration from a standing stop. A motor stop switch on the right-hand grip cuts out power to the motor, and the bike won’t move if the kickstand is down.

The Zero remains silent when it’s on and ready to move. If you’re only familiar with vehicles that have gas or diesel engines, the lack of noise may lead you to think it’s not on. Oh, but it is. It definitely is.

I was cautious with the throttle at first. Electric motors can deliver full torque from a standing stop, so it’s a good idea to approach with caution. However, I’m happy to report you can ride comfortably at slow speeds on the Zero S. The throttle isn’t overly sensitive, with excellent “feel” and granularity.

If you need to stop quickly, the Zero S’ brakes have more stopping power than you may ever need. I found the learning curve for modulating the potent brake system steeper than getting used to the throttle. The Zero S has Bosch ABS disc brakes, with dual 320mm calipers in front, and a single 240mm caliper in the rear.

This nearly-naked sportbike has no fairing and little bodywork covering the functional components. The rider geometry (the relative positions of the handlebar, seat, and rider footpegs) requires a moderately forward-leaning posture. Forward-leaning is excellent for going fast and carving turns and canyons. Entry-level riders with previous experience on a more upright bike will need to adjust, but not as dramatically as with more aggressive bikes.

Motorcycle companies are typically cautious with quoting acceleration numbers. I didn’t time my runs, but I have heard from others Zero riders that 60 mph comes in under 4 seconds. My butt says that’s about right and, speaking as someone who’s not a veteran rider, it was exhilarating.

My test bike, with the basic 7.2 kWh power pack, has a 98 miles per hour (mph) maximum top speed with a sustained top speed of 80 mph. The rated driving ranges for the Zero S with the base power pack are 89 miles in city driving, 45 miles at 70 mph on the highway, and 60 miles combined.

If you are willing to pay for more range, the Zero SR, which is essentially the same bike, has a 14.4 kWh battery pack. The SR starts at $15,495 and boosts the range to 179 miles for city driving, 90 miles on the highway, or 120 miles combined. For the maximum possible driving distance with Zero S models, you can also add the 3.3 kWh Power Tank for $2,895. The Zero SR with the Power Tank is rated for a maximum of 223 miles in the city, 112 miles on the highway, or 150 miles combined.

Your choice will balance cost, range, and weight. You can’t switch power packs or add the Power Tank later, so it’s essential to buy the right power combination from the start.

A third option is to buy an optional Charge Tank ($2,495). With the Charge Tank, you can plug into a standard Level 2 charge station for a 95% charge in one hour, or 100% in 1.5 hours. Note that you can’t order a Zero S or SR with both the Power Tank and Charge Tank options.

As set by the factory, Eco mode cuts the top speed to 70 mph, limits the torque, and dials up the regen-style engine braking effect. Sport mode unlocks the top speed of 98 miles per hour, full torque, and little or no regenerative braking. You can customize both profiles with Zero’s mobile app.

I rode the Zero S most of the time in Eco mode through suburban neighborhoods, in small towns, and on country roads and highways. The Zero S is well-balanced, so riding slowly is easy. I quickly became used to its smooth throttle operation to roll on speed as desired. The dialed-up regeneration setting in Eco mode meant I rarely needed to use the brakes until I came to a full stop.

Electric motorcycles’ are silent, and that can be a mixed blessing. Motorcyclists are used to noise alerting pedestrians and other drivers, but you don’t get that with an electric powertrain. It’s a good idea to locate the horn button on the left grip, so you can alert anyone who needs it.

The upside of running silent is there’s less chance you’re going to disturb your neighbors with the Zero S, and certainly not with the noise. On one of my first rides checking out the bike’s operation, a neighbor used to seeing me on e-bikes came over to check out the Zero S.

“That’s an actual motorcycle?” he asked. I was able to answer without raising my voice over the Zero S’ motor because, of course, it was silent. On a regular motorcycle, I wouldn’t have even heard him unless I stopped and turned off the engine.

I thoroughly enjoyed riding the Zero S, and was particularly impressed by its balanced, quiet ride. Seasoned sports bike riders would likely switch right over to Sport mode and fly with it. The power, brakes, and handling are certainly there.

Ease of operation makes the Zero S accessible for beginning riders. My only hesitation is that new riders will need to get used to the forward-leaning riding position.

Is there a better alternative?

In a few years, there will be many more choices for people shopping for electric motorcycles, but Zero already has a 12-year lead. No other company has Zero’s experience and range of current electric models.

The Harley-Davidson Livewire makes fans of most who ride it, and Harley has been showing other concept electric bikes, but the Livewire’s $30,000 price tag limits its appeal. The Lightning Motorcycles LS-218 is the fastest production motorcycle, but starts at $38.888. Both bikes target experienced riders with money to spend.

Several companies make much smaller e-motorcycles, like the Ubco 2×2 and the Cake Kalk OR. They’re more affordable, but often focused on off-road or multi-surface riding, with a lower top speed and less range.

How long will it last?

Zero Motorcycles include a two-year general warranty and a five-year warranty on the power pack. Zero is an established company with dealers throughout the United States, so parts and service shouldn’t be concerns.

Should you buy one?

Yes. If you want an electric motorcycle for recreational riding or commuting, the Zero S is a great choice.