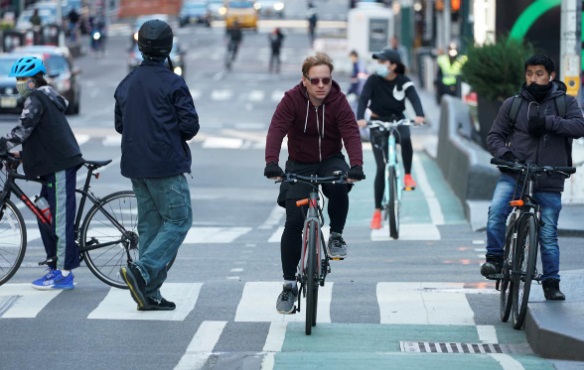 The coronavirus pandemic has sparked a surge in bike sales across the United States, according to a major manufacturer and a half dozen retailers interviewed by Reuters.

“I’m 51 and healthy, but I don’t want to get on the subway,” said John Donohue, a Brooklyn-based artist who bought a bike two weeks ago. Donohue, who doesn’t own a car, says he’s not sure when he’ll be comfortable on mass transit again.

The coronavirus pandemic has sparked a surge in bike sales across the United States, according to a major manufacturer and a half dozen retailers interviewed by Reuters.

Many of the purchases are by people looking for a way to get outside at a time of sweeping shutdowns and stay-at-home orders aimed at containing the virus: Even the worst affected states are allowing people out to exercise.

Still, a portion of the sales, especially in urban areas, are to people like Donohue who also want to avoid the risk of contagion on buses or subways.

He plans to use his new 24-gear hybrid for journeys such as regular visits to a printing shop across town that he normally travels to by subway. A key feature, he said, was the bright red panniers he added to carry his artwork.

To be sure, bikes remain well down the list of U.S. commuting preferences.

A more recent survey, though, showed a higher percentage of U.S. workers using a bike to get to work. Private research firm Statista Inc.’s 2019 survey showed 5% rode their own bike, while another 1% used a bike share service, an increasingly common option in larger cities.

Running Out Of Stock

The government has declared bicycles an essential transportation item, so many bike shops remain open despite the widespread business shutdown. Many, though, have modified how they operate, no longer letting buyers test bikes and handing them over on the curb rather than inside the store.

According to the National Bicycle Dealers Association, roughly three-quarters of U.S. bike sales are through big box stores. While many of the outlets of large specialty sporting goods chains are closed, general merchandisers like WalMart Stores Inc, the largest seller of bikes, remain open. Walmart did not respond to a request for comment.

Kent International Inc., which imports bikes from China and also makes them at a plant in South Carolina, said sales of its low-priced bikes had surged over the past month.

Kent is already out of stock on five of its top 20 models and expects that to rise to 10 by the end of the month, chief executive and chairman Arnold Kamler said. He noted supplies were flowing in from China, which has reopened much of its manufacturing base over the past month.

Kamler said sales at most of the major retailers he supplies were up 30% last month and are up over 50% so far in April, with the surge in demand forcing him to change shipping arrangements.

He normally imports bikes to ports on both the East and West Coasts. But with many retailers asking for more bikes, he’s now directing all shipments into West Coast ports, then transporting them across the country. That adds to freight costs, he said, but can cut weeks off delivery times.

Mark Vautour, who manages a bike store near the Boston University campus, said he had sold bikes to anxious commuters – including at least one medical worker who wanted an alternative to using the subway.

“We’ve joked for years that trains are like a petri dish,” Vautour said.

Mostly, though, his sales have been children’s bikes, “because parents don’t know what to do with their kids.”

One indication that people are buying bikes for more utilitarian uses like commuting is that many of the purchases are low-priced bikes, several bike retailers said.

Those lower prices are one reason many bike retailers are struggling, despite strong sales.

Andrew Crooks, chief executive of NYC Velo, a three-store chain in the New York area, said the drop in average selling prices meant revenues had fallen at a time when he was still paying rents, salaries and other costs.

“So we could keep our doors open and still end up with a business that’s not viable,” he said.

Still, some new buyers say they are switching to bikes for the long term.

Having been stuck at home in Baltimore, Kaitlyn Lee bought a $550 bike this weekend so she could get outdoors safely and avoid public transport when she gets a job.

Lee will finish a graduate degree in public health at the University of Maryland this spring and has applied for jobs at the Centers for Disease Control and the Health Resources and Services Administration, part of the U.S. Department of Health and Human Services. Her plan is to commute by bike to a future job, if possible.

“I mean, it’ll never completely vanish,” she said of the coronavirus. “Rather we will learn how to live alongside of it, just like with other viruses.”