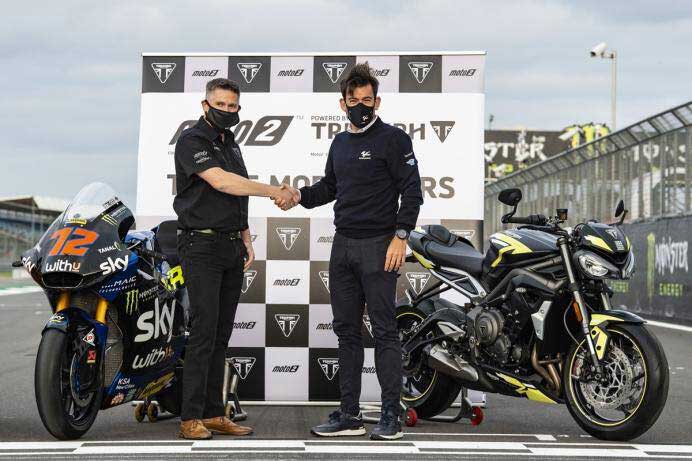 Triumph Motorcycles today announced that it will continue to provide their 765cc triple powerplants as Exclusive Engine Supplier to the FIM Moto2 World Championship for another three seasons, from 2022-2024. Since the start of the 2019 season, Triumph Motorcycles has provided all of the teams with race-tuned 765cc triples, each of which is based on the Street Triple RS engine. The changes made to the race-tuned engine allow it to breathe more freely, rev harder and deliver a peak power output of more than 140 PS (an increase of over 17% on the production engine).

Following Dorna’s intent to bring the Moto2 series closer to MotoGP, the increase in power and torque, combined with a more advanced electronics package, has provided a more relevant training and development ground.

In the last two years, Moto2 graduates have gone on to take podiums and victories in their first seasons in the premier MotoGP class: 2019 Moto2 World Champion Alex Marquez taking a pair of second places in 2020, and title rival Brad Binder with a victory also in 2020 and more recently in Austria 2021.

Jorge Martin took his first Moto2 victory in 2020, followed a year later with his maiden MotoGP win and a further two podiums in 2021. These incredible results go to prove how Moto2 has become the natural springboard for MotoGP that Dorna envisaged.

A total of 14 different race winners since 2019 there have been lap records set at 34 events, including records that have been broken and re-broken year-on-year, and the first-ever 300+ km/h top speed for a Moto2 machine. The record stands at 301.8 km/h at Phillip Island, Australia.