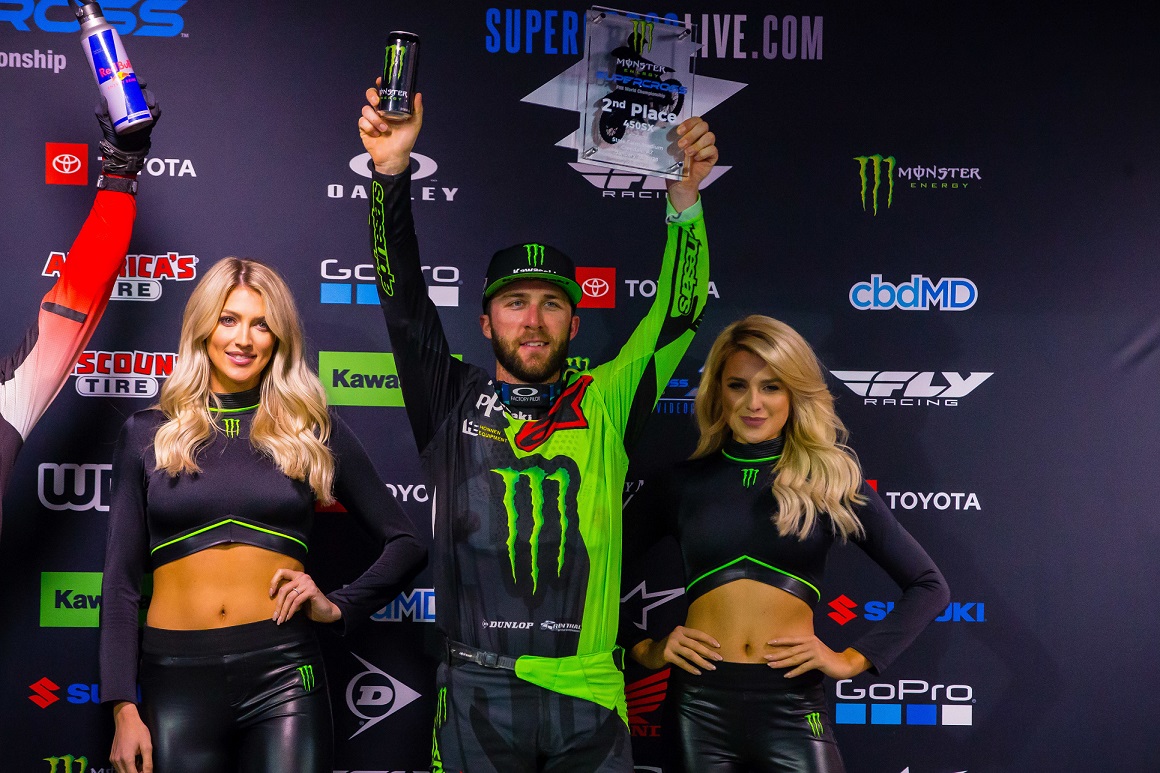 Adam Cianciarulo kept his streak alive by qualifying with the fastest lap time (1:02.5) for the fourth time in a row this season with his teammate Tomac once more followed closely in second.

As the gate dropped on 450SX Main Event 2, it was the No. 3 Kawasaki machine of Tomac who quickly took the lead just before another rider went down on the first turn, forcing a red flag and the race to restart. Once again, the now 21-rider field would line up for the second main event but this time presenting Tomac with more work to get to the front as he started from fifth, while Cianciarulo was able to position himself in third. Just as Cianciarulo made his way into second, he made a minor error causing him to tip over and remount in eighth. Before the checkers flew, both Kawasaki riders were able to advance a few positions with Tomac crossing the finish line with another second-place finish and Cianciarulo in sixth.

Eerily identical, 450SX Main Event 3 saw another red flag at the start of the race forcing the riders to once again line up, making this their fifth gate drop of the night. As the gate dropped for the final race of the night, the Kawasaki teammates found themselves buried mid-pack in 11th and 12th positions. Acknowledging they had their work cut out for them, they began charging the field as Cianciarulo made his way into fifth by Lap 3 and Tomac trailing right behind him. With only a few laps remaining, Cianciarulo reached third before suffering a hard crash in the whoops and only managed to finish 17th, ultimately giving him eighth overall with 3-6-17 scores. However, Tomac was able to continue his consistency and takeover third place, where he would finish for second overall with 2-2-3 scores. Tomac has now advanced to second in the 450SX Point Standings, merely eight points behind the leader. 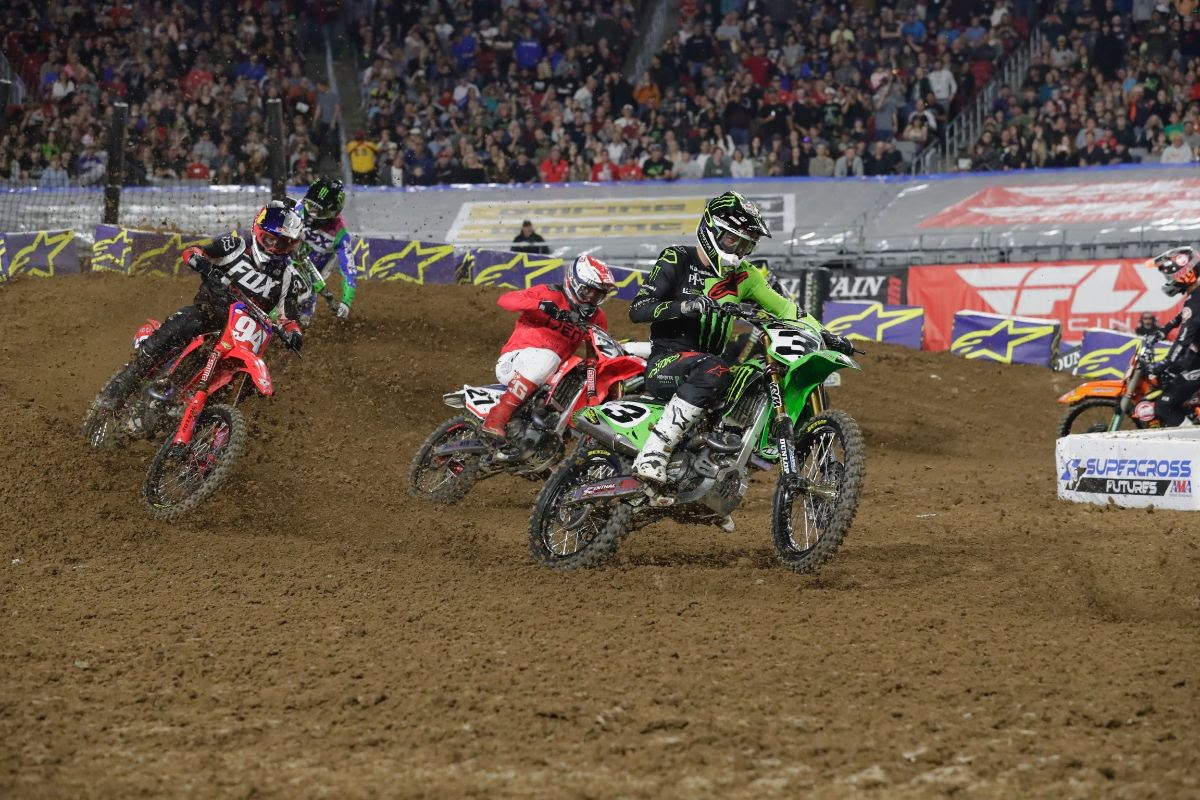 “These Triple Crown races are already crazy and then to add the two red flags, there was just a lot going on. We technically had five starts tonight and I didn’t exactly help myself on those, but I was able to make my way to the front and remain consistent with my finishes. Consistency really was the key tonight and the team worked their tails off to help me finish up on the podium. We still have some work to do but overall, we had a successful night and I’m glad we’re close in the point standings.”
– Eli Tomac

“That was definitely not how we wanted to finish the night and although this is part of racing, it’s always a tough pill to swallow. We kicked off the day qualifying fastest again and honestly, I was feeling good all day. I made some mistakes out there and that last one cost me. I’m sore and a bit frustrated but I have a great team behind me, who continue to remind me there are a lot more races left to go in this premier class. We’ll take the week to recuperate and look to come out strong in Oakland.”
– Adam Cianciarulo

Monster Energy/Pro Circuit/Kawasaki’s Forkner kicked off the day qualifying third and headed straight into the three main events with the momentum.

Forkner wasted no time proving he is still a force to be reckoned with as he dominated the first two races in the 250SX class after blasting out front and taking off to lead 17 of the 22 laps combined.

As the gate dropped on 250SX Main Event 3, Forkner cautiously shot out in fourth keeping the overall goal in mind. As he approached Lap 4, Forkner maneuvered his way into third with the goal to finish out the night consistently and with the overall win, which is just what he did with the 1-1-3 scores.

After putting his KX™250 on the top step of the podium for the overall win on the night, Forkner was able to reduce his point deficit to 10 in the 250SX West Point Standings and now sits fourth. The 250SX West class has two rounds remaining before a six-week break begins and the 250SX East class comes in to vie for their chance at the championship.

“I’ve been working on the whoops with the team all week because I’ve really been struggling there, so I was ready to race tonight. I’ve had to dig myself out of a hole after last weekend and now 10 points down isn’t too bad. I’ll just keep grinding, chipping away at those points and continue to dig out of this hole. Overall, it was a great night for the entire Monster Energy/Pro Circuit/Kawasaki team and we’re looking to keep it rolling.”
– Austin Forkner