Harley-Davidson Production-R Is Nothing Like a Series Milwaukee Motorcycle 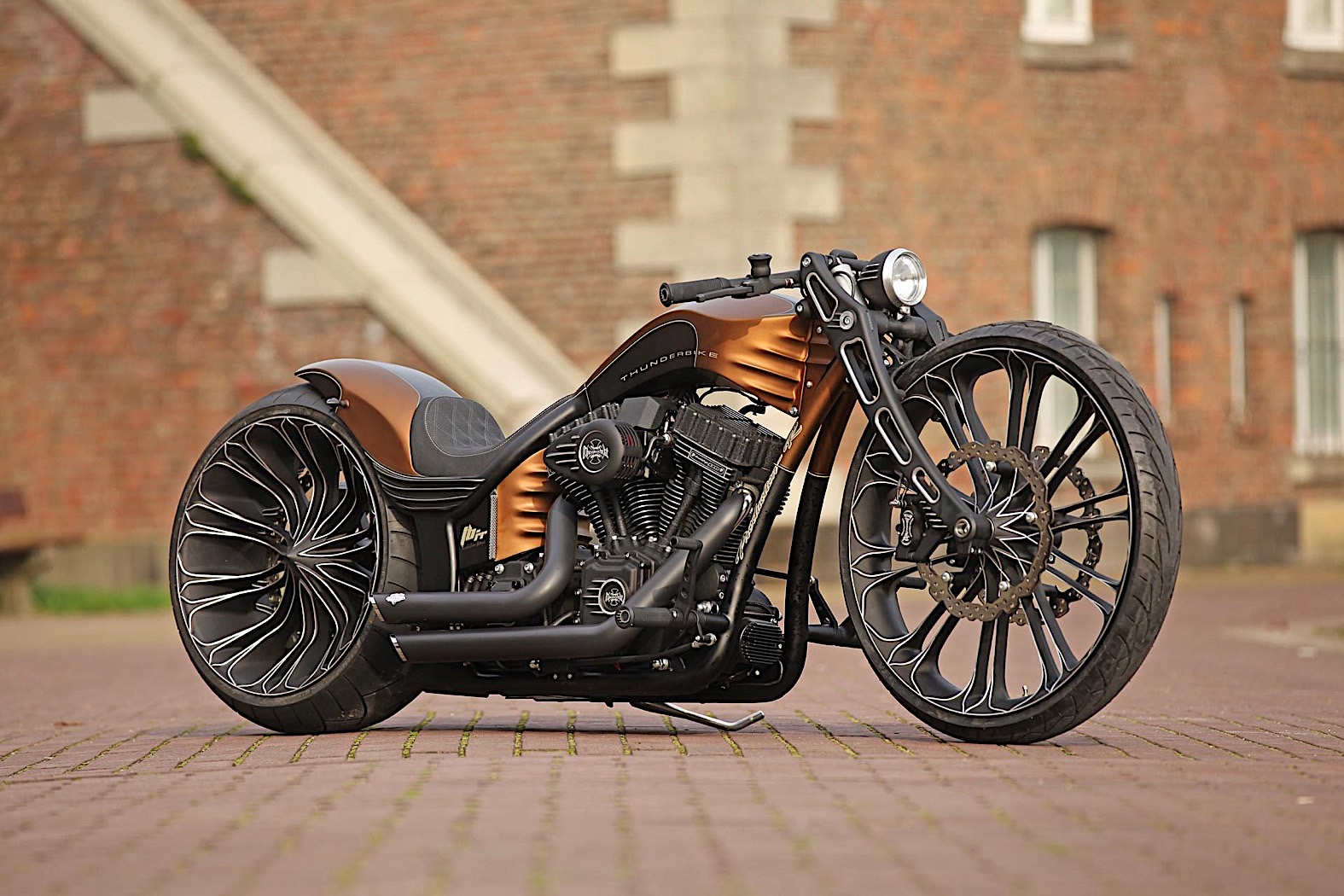 We’re not sure how many Harley-Davidson branded parts are needed for a custom motorcycle build to justify the use of the name Harley, but we’re pretty sure the deployment of a Screamin’ Eagle, even on a custom frame, is reason enough.

Despite this name, the bike in the gallery above is of course not a series production Harley. It is actually a custom creation coming from Germany, from the hands of a garage called Thunderbike – we’ve talked about this crew’s products at length over the past couple of months.

As most of the group’s other two-wheelers based on a custom frame, this too was meant as an exercise for seeing what can be “technically feasible with Thunderbike frames and parts.” That means tons of original hardware was fitted on the same frame, linked to a Harley engine, and made to work both visually and mechanically.

The skeleton of the motorcycle is a frame Thunderbike calls TBR-R. Inside it sits a Harley-Davidson Screamin’ Eagle 110 good for 100 ps and 160 Nm of torque. But that’s not the impressive part.

No matter your opinion on custom motorcycles so extreme, we’re pretty sure you can’t help but notice the massive wheels fitted on this one, especially the airplane turbine-shaped one at the back. Sized 26-inch front and 21-inch rear, they eclipse pretty much every single other part of the build.

As usual, the Ingo Kruse-painted bike rides on an air suspension that should give it a bit more ground clearance that shown in the photos above.

The Harley-Davidson Production-R by Thunderbike made its official debut way back in 2014 at the European Bike Week in Faak, Austria. We are not being told what happened to it since, but we’re pretty certain we’ve seen an evolution of the design language chosen for this bike making quite an impression on subsequent Thunderbike creations.

Harley-Davidson Titanium Is a Lower and Slimmer Breakout 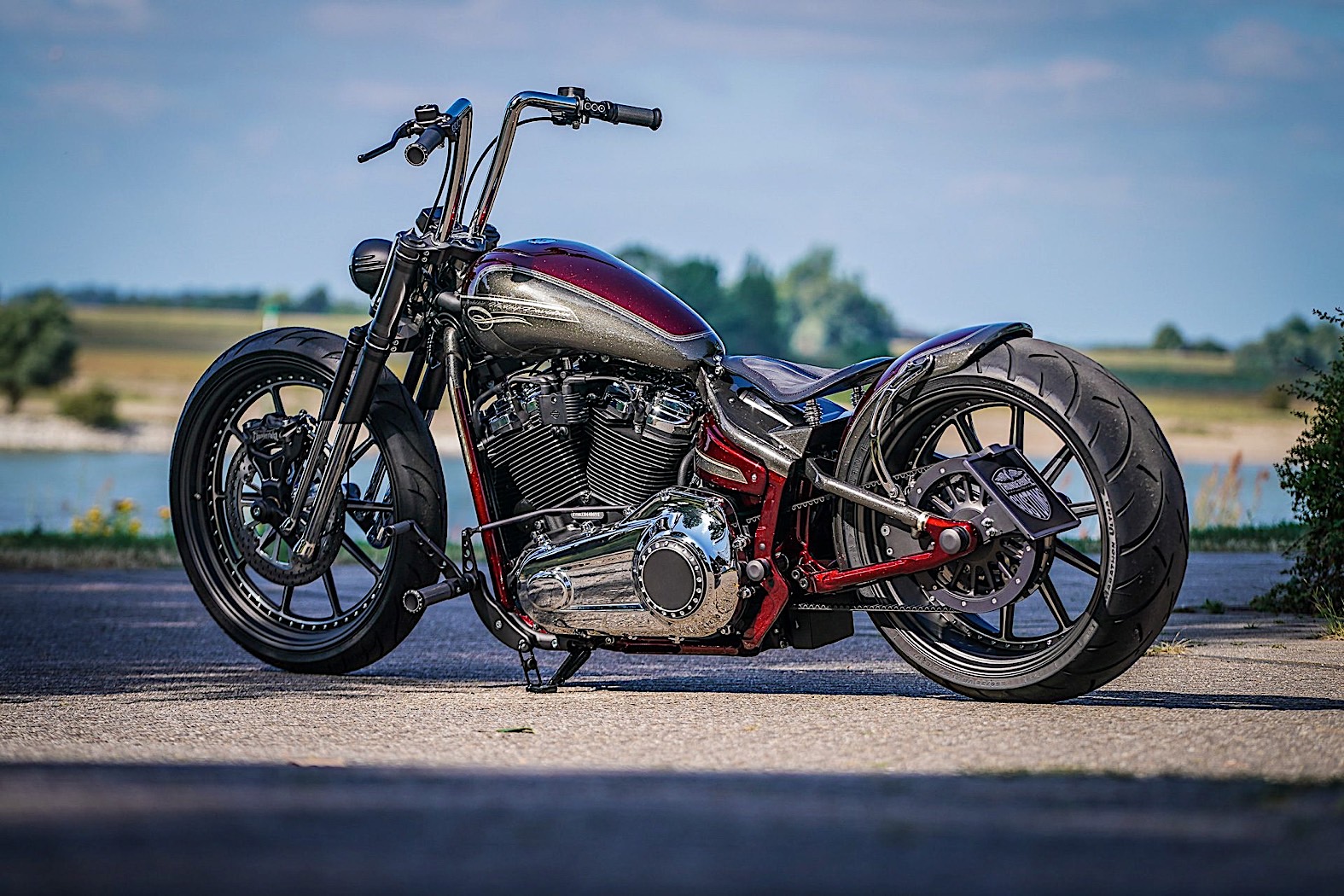 German Harley-Davidson dealer/custom bike builder Thunderbike has been in the business of reimagining Milwaukee made machines for two decades now, and one of the favorite stock motorcycles it likes to tamper with is the Breakout.

Part of the Softail family that presently includes no less than 12 models, the Breakout is described by Harley itself as a “muscular modern chopper that turns stoplights into drag strips.” For Thunderbike, the stock bike is more of a canvas to be remodeled at will.

The Breakout conversion in the gallery above is called Titanium, and that name was chosen because almost all the aluminum parts fitted on the motorcycle have been polished in titanium – and there’s a long list of them, ranging from the tiny side mount license bracket to the more visible 21- and 23-inch wheels.

Some of these parts have other functions than being just visual enhancements for the custom build. The air suspension, for instance, brings the two-wheeler much closer to the ground than in stock form, while the wheels, fork and custom fuel tank significantly alters the shape of the bike compared to the original Breakout.

The engine remains the stock 114ci fitted from factory, only it breathes through a Dr. Jekill & Mr. Hyde exhaust system.

Visually, the cold look of the Titanium-polished parts is enhanced by means of a custom paint job performed by one of Thunderbike’s favorite partners in this field, Ingo Kruse. The German garage says it took just a few weeks to put together, paint job included.

The bike in this condition, which was first shown in public last year at the garage’s Jokerfest event, is listed by Thunderbie as for sale, but no mention of the price is given. Full details, as well as a way to contact the garage, can be found at this link. 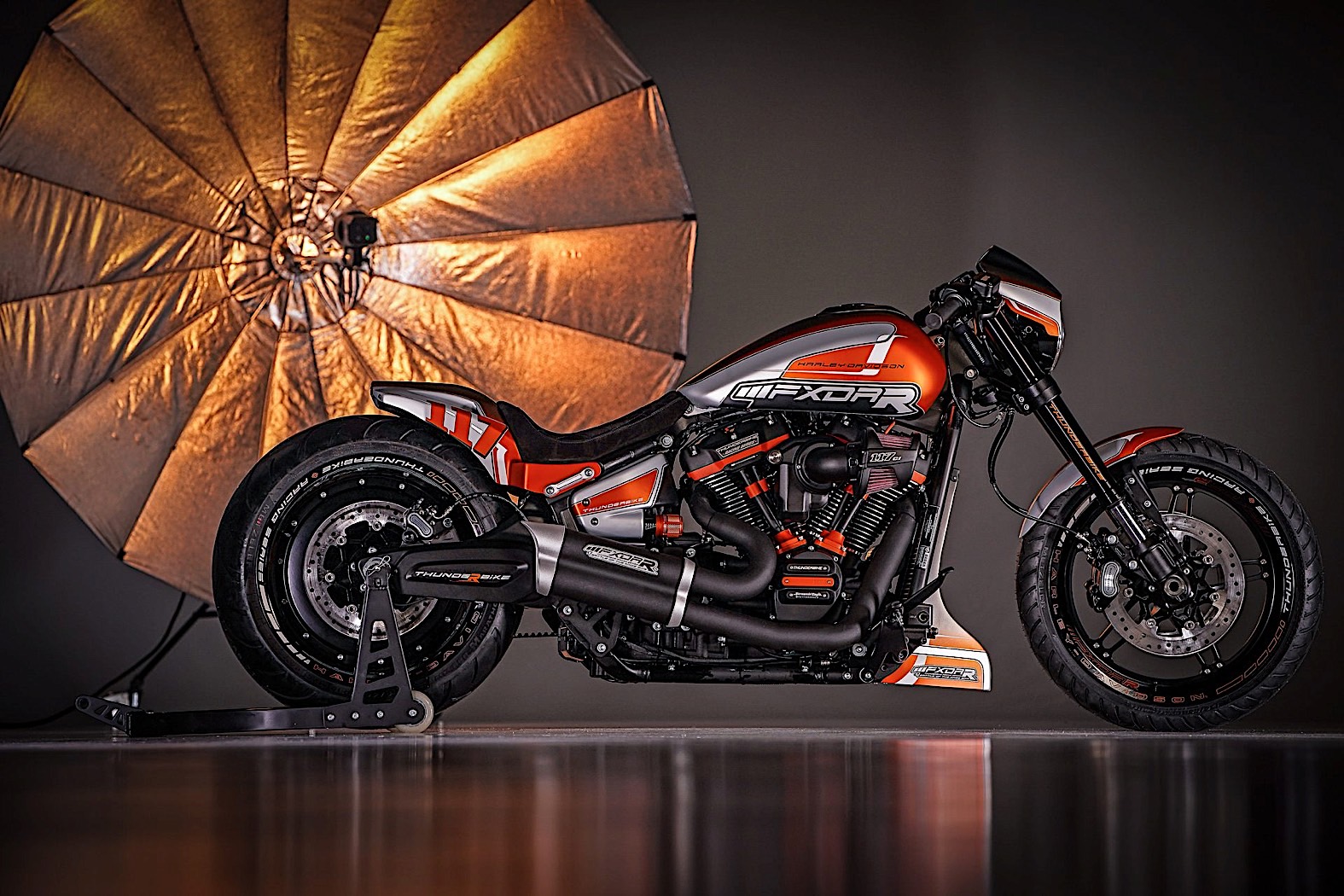 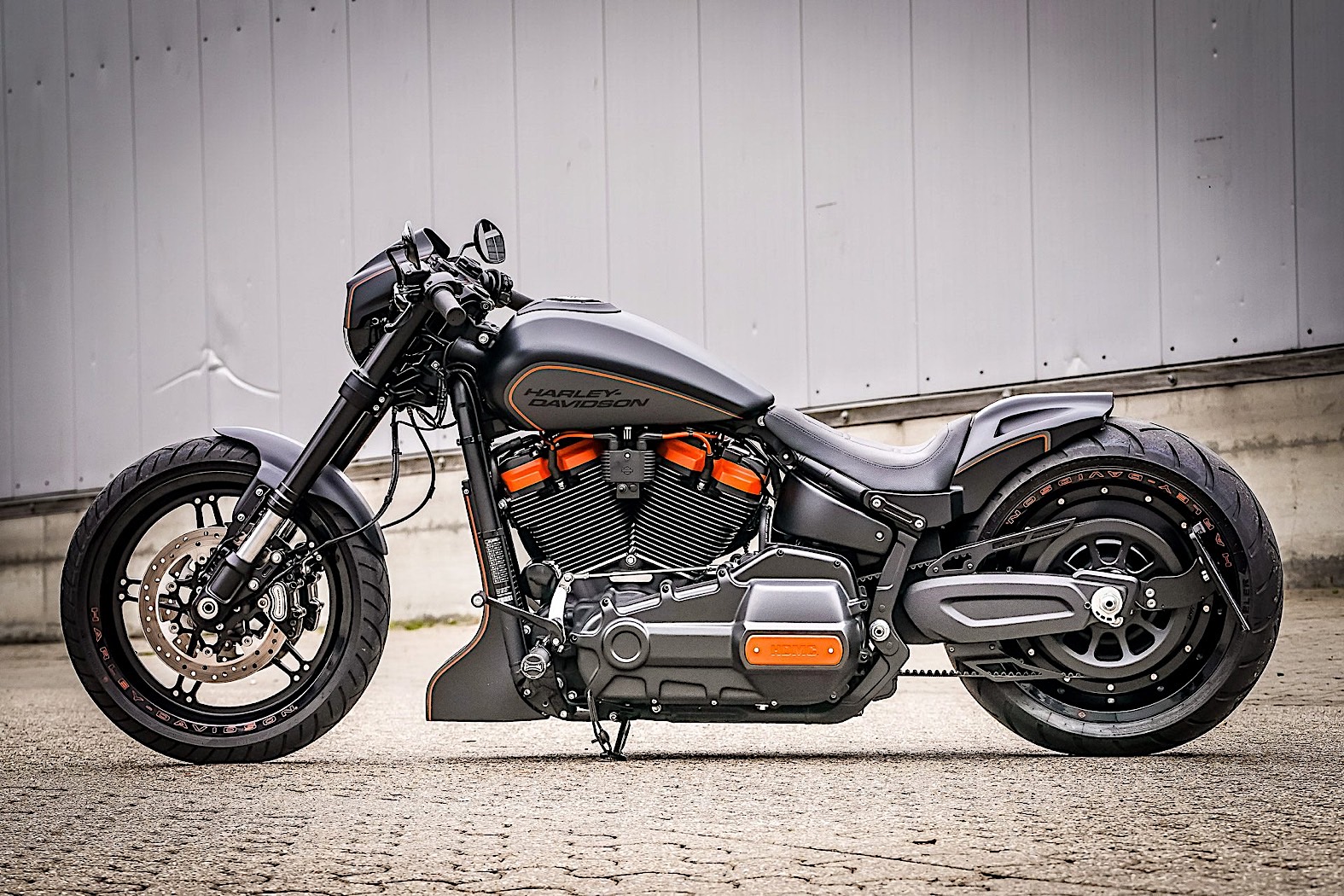 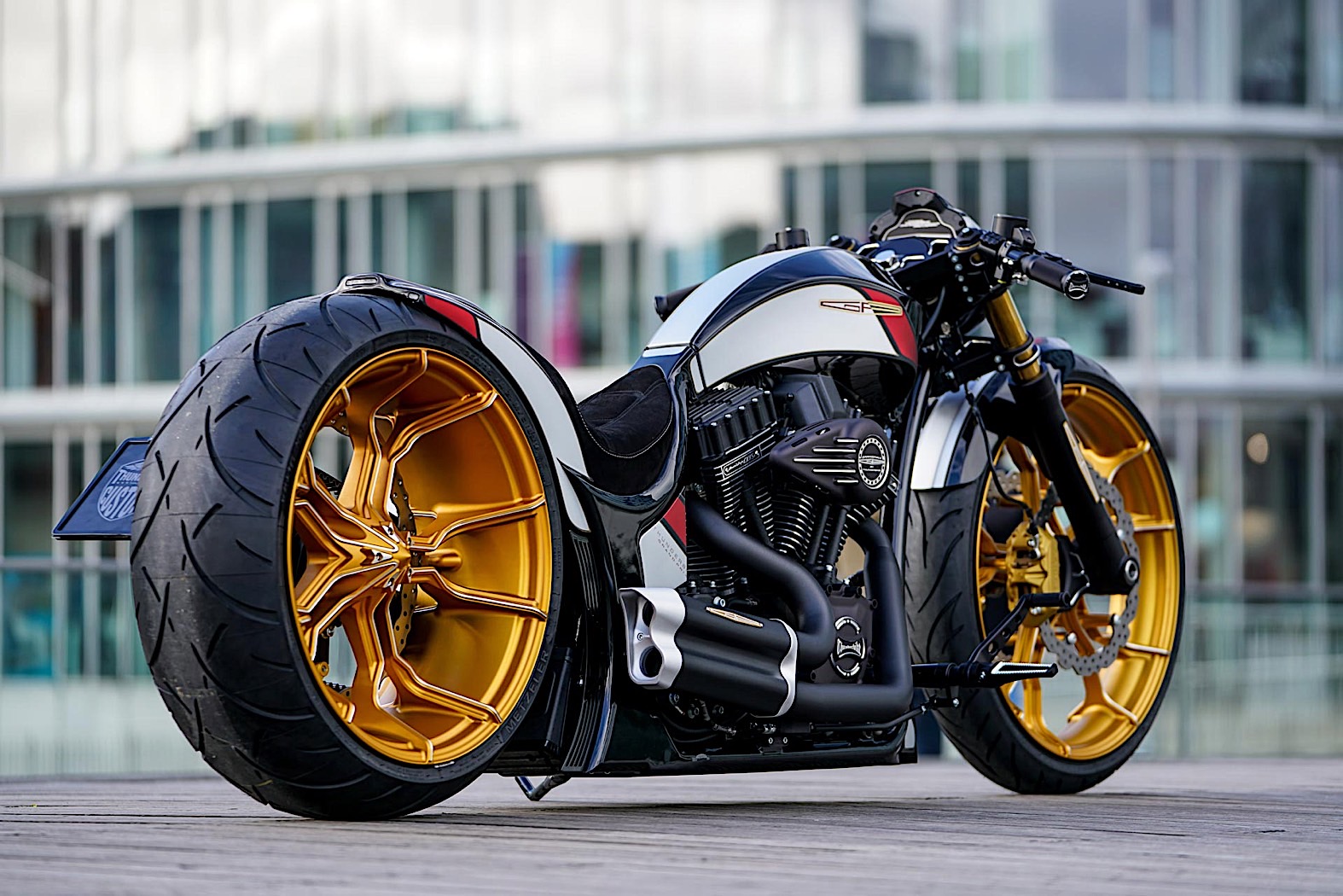 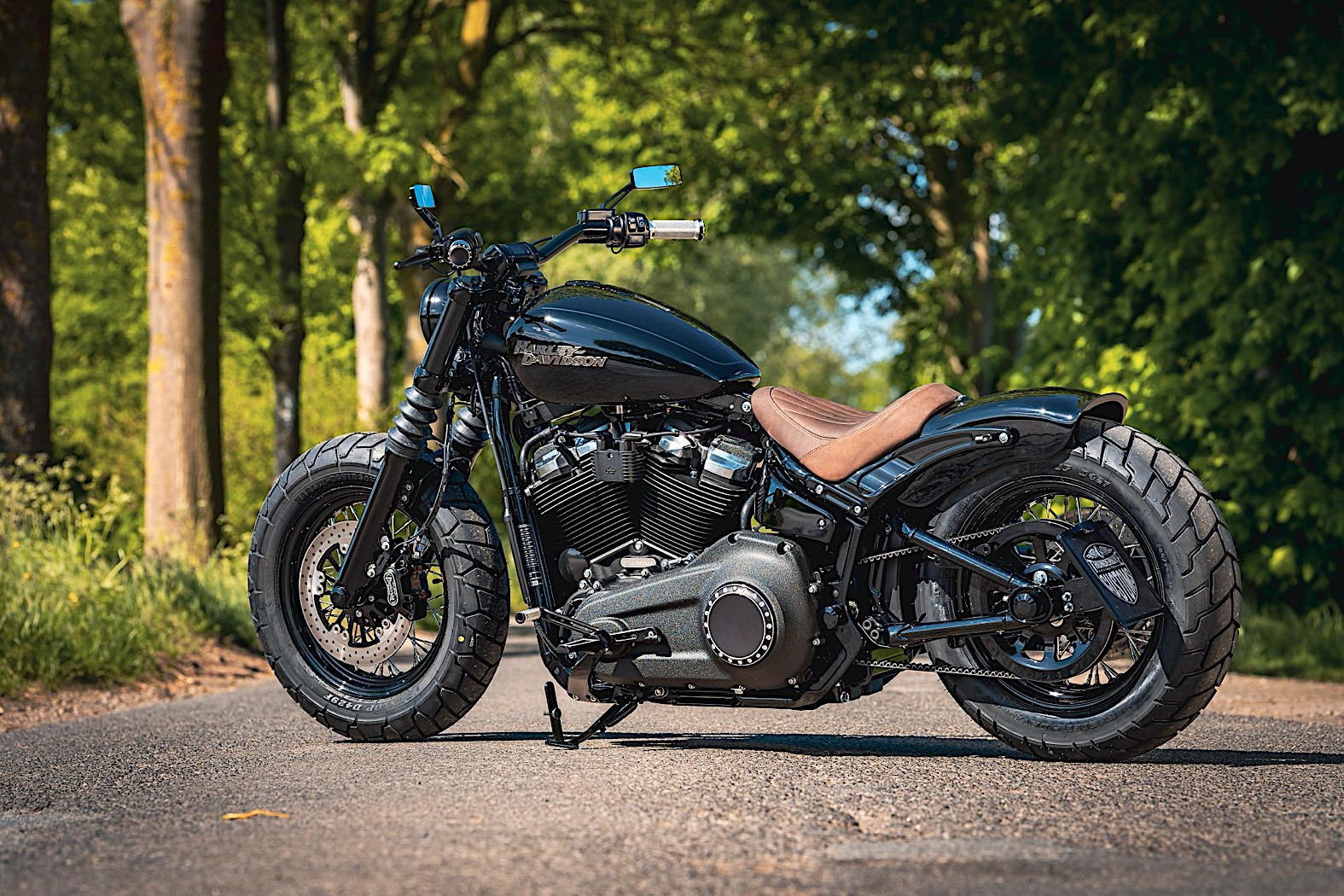 The European custom motorcycle industry is not even close in terms of size and reach as that in the U.S. but that doesn’t mean there aren’t shops on the continent that strive to keep this segment populated with constant new builds. German Thunderbike is one such shop, and this here machine is its latest customized Harley.

Based on the bike maker’s Street Bob, the bike has been built to highlight what Thunderbike has to offer in terms of custom parts for Harley motorcycles. But it is also described as the perfect tool for riders to “clear your head and leave the stress of everyday life behind.”

The first things that stand out when it comes to this Street Bob are the wheels. The garage decided to fit the motorcycle with two rear wheels for symmetry and more balanced proportions: the front one is a 3-inch wide wheel that usually goes at the rear, while the rear one has been replaced with a 5.5-inch wide one. Both are wrapped in Dunlop rubber,

A long list of other custom parts made it onto the all-black build, most of them of Thunderbike-design. They range from the front and rear fenders to turn signals and exhaust – this last piece of hardware is from Dr.Jekill & Mr.Hyde.

“To give the Country Cruiser more visual highlights we have installed our covers “Drilled” on the primary, ignition and grip ends. The flat torque handlebar with our Base Rubber grips offer good grip and a relaxed seating position that is already in the bobber style,” Thunderbike says about the build.

As with most of the other project the garage is responsible for, the Country Cruiser as they call it uses the stock Harley engine. In this case, we’re talking about a 107ci Milwaukee Eight with no enhancements.