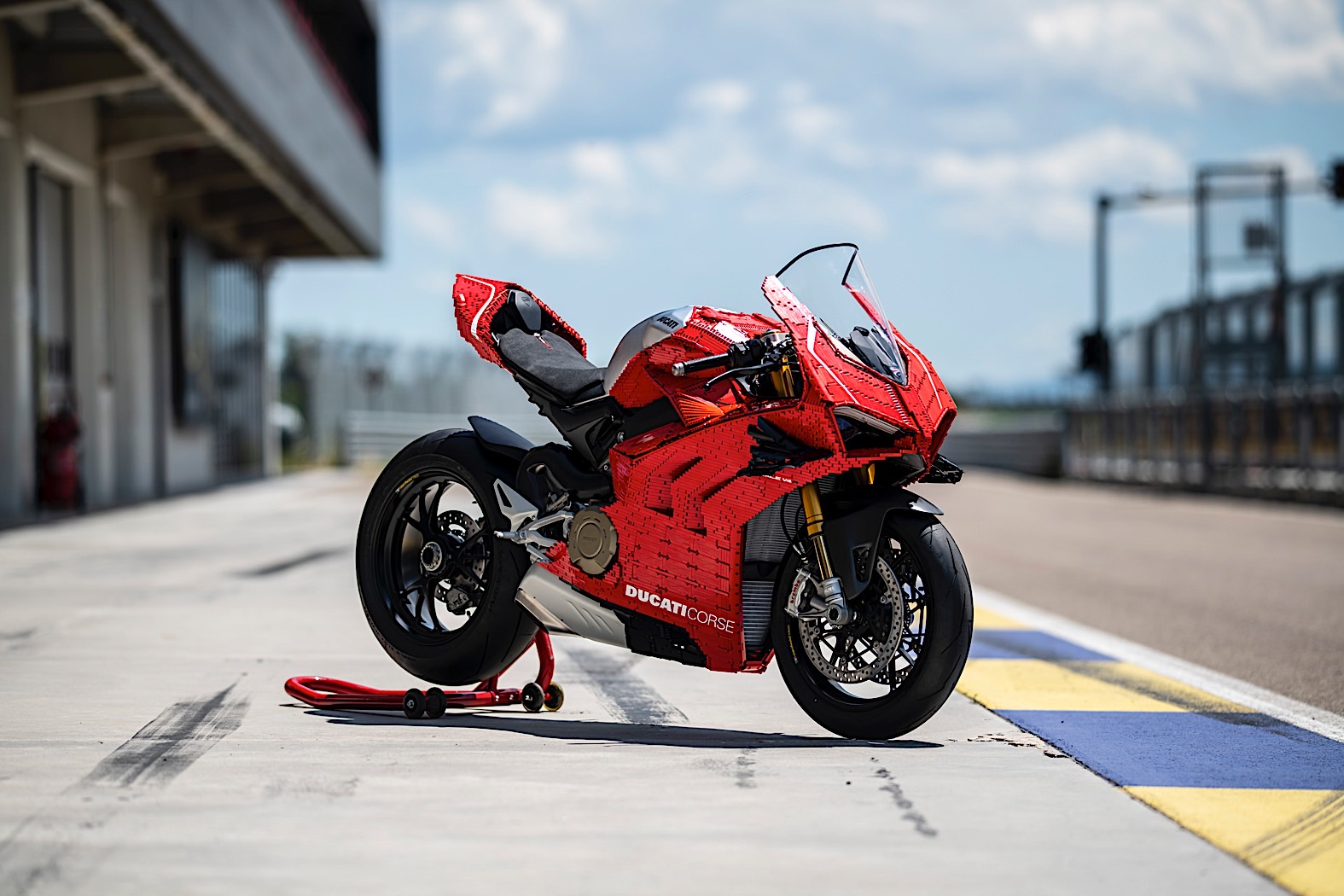 On June 1, as the perfect way to celebrate Children’s Day, LEGO launched the plastic brick Ducati Panigale V4 R. It is the first-ever Ducati to be used by the toymaker for one of its Technic products, and it currently sells for $69,99.

But that small-sized Panigale is not the only LEGO tribute to one of the most potent motorcycles in the Ducati arsenal. Another one, this time a life-sized replica of the original motorcycle, was to be seen on Friday (June 19) on location in Modena.

The build is the work of a LEGO addict by the name Riccardo Zangelmi. The guy has been manhandling LEGO for ages, and his most recent products include buildings, animals, logos, and even a G-Class (this one not life-size).

The Ducati build is described by the artist as being the most challenging he ever worked on. He says the motorcycle has been build and disassembled eight times before he got it right, and keep in mind he’s done so with enough bricks to fill a swimming pool.

Once he sorted out what went wrong all those times, Zangelmi finished his work. The end product weighs according to Ducati 150 kg (331 pounds), it required 400 hours of work, and was completed without the use of CAD software. Also, nothing but the natural attraction between the Danish bricks is holding the thing together, as no glue was used in the process.

“Taking part in this LEGO Italia and Ducati project was the most exciting professional challenge I have ever faced,” Zangelmi said in a statement.

“I went beyond all limits and I won by crossing the finish line in a team. I approached the project as an official driver of the Casa di Borgo Panigale would have done, pushing hard on the track, looking for and overcoming new limits. I first look at the two bikes today, side by side, and I’m happy to have caught the DNA that characterizes both LEGO Technic and Ducati, recreating the bike symbol of Italian excellence in bricks .” 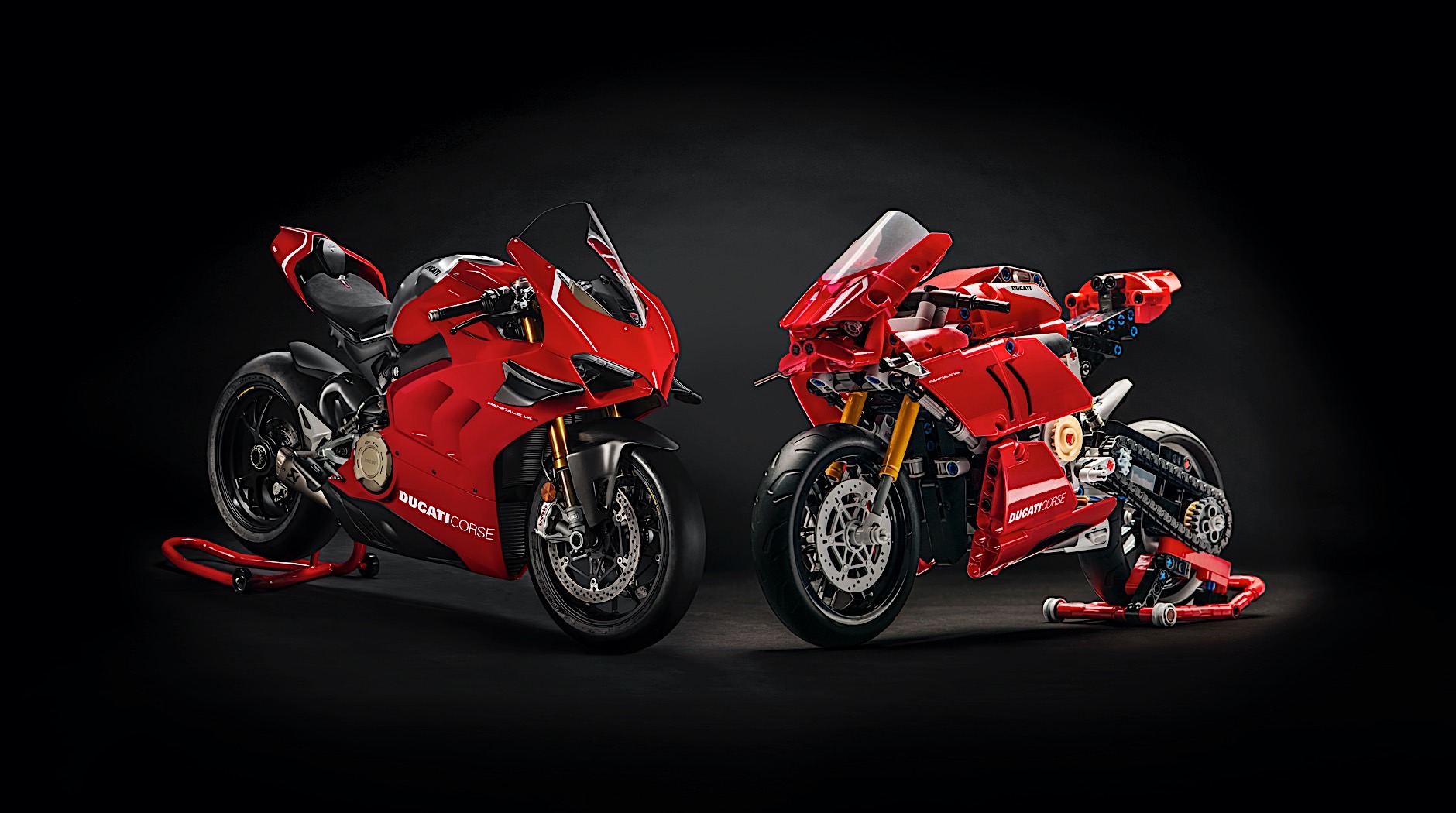 We’re used to having LEGO recreate the exciting cars of past and present in plastic bricks, and at times we even enjoy some motorcycle-related releases. But until now we’ve never had a LEGO-sanctioned Ducati motorcycle.

And we’re not talking about any Ducati, but the most powerful one of all time, the Panigale V4 R. With 221 hp coming from the 998 cc Desmosedici Stradale R engine, this bike needed special attention from the world’s favorite plastic bricks maker.

Enter the LEGO Technic Ducati Panigale V4 R, the toy replica of the real one. And not just any replica, but one with some working parts.

This new toy, dedicated to wannabe engineers aged 10+, is the first LEGO Technic ever made to include a gearbox. And it works, too, as you can actually witness how it “activates the V4 engine” and simulates different speeds.

Other working parts are the front and rear suspension that go up and down to “simulate a GP ride and feel like an official Ducati rider,” and the steering.

The toy set comprises 646 bricks, most of them in the Ducati red livery, which once assembled make a bike measuring 32 cm in length, 16 cm in height and 8 cm in width. The replica features faithful recreations of the exhaust pipe, windscreen and dashboard.

“Being one of the first to have built with bricks the model of an icon such as the Ducati Panigale V4 R was exciting,” said in a statement Paolo Lazzarin, General Manager of LEGO Italia.

“The set perfectly captures the spirit and design of the original thereby transforming the concept of performance: pure adrenalin racing and full control. This model is the brainchild of the partnership with Ducati Design Center and I am convinced that LEGO fans of all ages will appreciate the attention-to-detail in this amazing motorcycle replica created by LEGO Technic.”