• One of a kind, ultra-rare motorcycle
• Matching numbers example
• Authenticated and recognized by the Vincent Owners Club 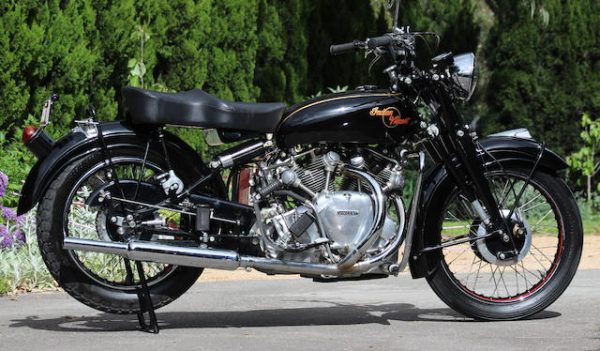 The year 1949 was a tumultuous one for the Indian Motocycle Company in Springfield, Massachusetts. The company was beleaguered on several fronts, most entirely due to finances. President of Indian, Ralph Rogers, was envisioning the future of motorcycling belonged to lightweights, like the Japanese manufacturers would confirm in a few short years, but his Torque series motorcycles were six months delayed leading to a loss of income, plus the manufacturing costs were double the estimated costs. Add injury to insult, the British currency was devalued so any advantage of the new lightweights against the English motorcycles was erased. 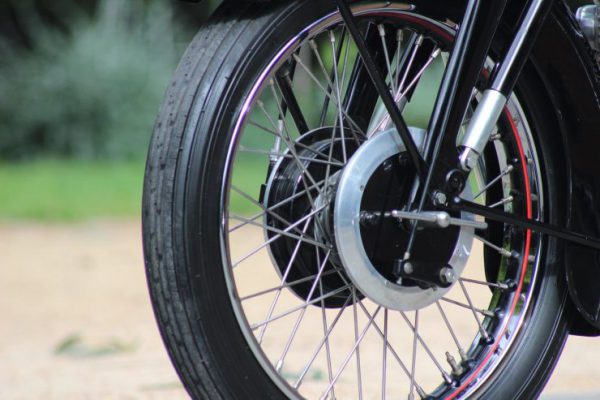 Rogers invited Phil Vincent of the Vincent Company to visit Indian during his tour of the U.S. dealers where the two men devised a concept to create a blend of the Indian Chief and the Vincent motorcycles. The compromise would have helped Indian with a modernization of the venerable Indian Chief with less investment funds, and also would have helped the Vincent by supplying engines. The plan entailed two prototypes; one would be a Chief with a Vincent engine installed and the second would be a standard Vincent Rapide customized with Indian parts recognizable to the Indian faithful. The proposal would supply 50 units of the former prototype, the Vindian, per week and the delivery of 20 units per week of the latter prototype, the Indian-Vincent. Sounds good on paper but Indian never followed through on the plan following the prototype stage, leading Vincent to enter into receivership due to purchasing materials for the business plan that would never happen. 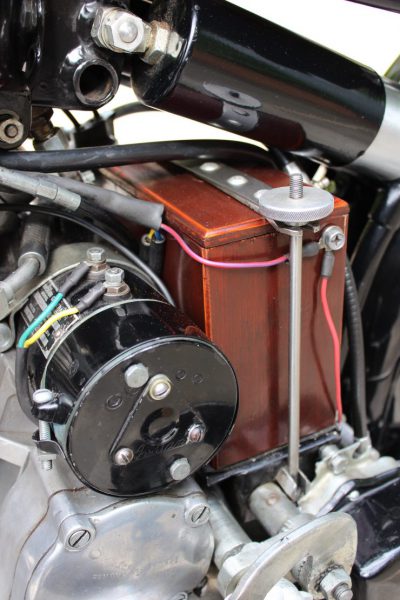 Vincent engineer, Phil Irving took on the project of the Indian and Vincent combinations. He completed the Vindian project within a month of hard work, fitting the engine from a Vincent Rapide into the 1948 Chief. The bike was road tested and following the necessary photo sessions, the project was dismantled, the Indian put back together and returned to the U.S. The second project entailed the blending of Indian parts to a 1949 Vincent Series C touring Rapide. The Indian-Vincent wore a Delco generator and regulator, a 1940 style fender light, a stock Indian tail light and headlight, an Indian ignition/lighting switch, stoplight switch, dimmer switch and horn. This prototype used a later die cast kick starter cover and timing cover which had Vincent on the cover instead of H.R.D. The rocker covers were also transitional, not bearing the Vincent name. Also mounted were crash bars and western style handlebars to make the motorcycle more receptive to American riders. 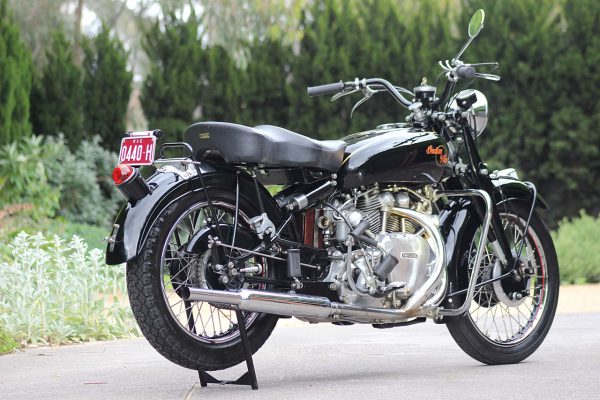 Towards the end of 1949, Ralph Rogers resigned as President of Indian due to mounting internal pressures, and in December, Phil Irving also retired from Vincent. Irving was presented with the Indian-Vincent, now stripped of its Indian parts which he mounted his Blacknell sidecar full of this tools and moved to Australia. Irving rode the “Vincent” until 1953 when he traded it for a Vauxhall Wyvern sedan. Then the Vincent disappeared until 2001. It came into the hands of the current owner who started to recognize that certain parts weren’t correct when he learned the true history of this very special motorcycle. Pieces of the motorcycle which had been modified for the fitting of Indian parts still remained, and correspondence with Phil Vincent’s son-in-law confirmed that his Vincent was the actual prototype for the Indian-Vincent. Special stampings and the serial numbers were vindicated in this research.
The owner had to decide how to restore this relic of a motorcycle. Should it be returned as a Vincent and go unrecognized among other Vincents, or should it be restored as the iconic project between two great motorcycle companies? Luckily its history has been preserved as the Indian-Vincent won out. However the project wasn’t simply restoring Indian parts back onto the Vincent. The owner had to fabricate missing parts such as the shift linkage which was on the left hand side of the motorcycle as on the prototype, fighting through the same complications as Phil Irving did back in 1949. It was a monumental effort with spectacular results.
This one-of-a-kind, ultra-rare motorcycle has been beautifully restored and is in operating condition. It has a gorgeous black finish with the Indian-Vincent name proudly on the gas tank, and features all the Indian components as it did back in 1949. The motorcycle has been recognized and authenticated by the Vincent Owners Club. In favor of riding this unique piece of history in today’s world, the electronics have been updated to 12 volts. Its American flavor is immediate with the Western style handlebars.

More pictures on the bike’s page at Bonhams, here. 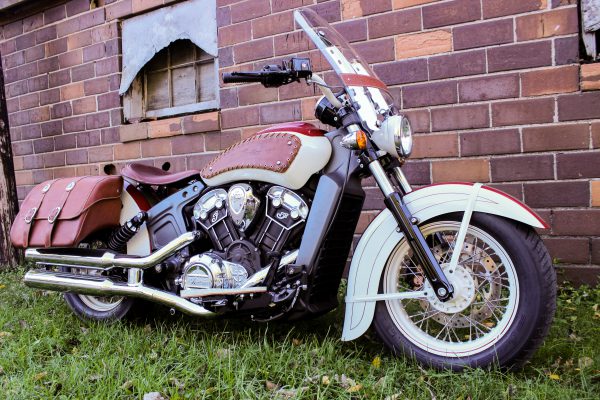 In addition to seeing the entire 2017 Indian Motorcycle lineup and getting hands-on experience with the all-new Ride Command™ infotainment system, show visitors will be able to get up close to the Indian Scout FTR750 flat track race bike – part of Indian Motorcycle’s historic return to Flat Track Racing – and check out authentic Indian Motorcycle apparel, accessories and gifts.

Additionally, Indian Motorcycle owners can receive a special gift by simply showing their key fob or a photo of themselves with their bike, and members of the Indian Motorcycle Riders Group (IMRG) should plan to meet at the Indian display at 12:30pm Saturday Dec. 10 for a group photo.

“Even if it’s cold outside, motorcycle fans always come to the big show in New York,” said Reid Wilson, Director of Marketing for Indian Motorcycle. “Indian Motorcycle has the most complete line-up of motorcycles in its history, and we look forward to meeting with existing and new fans of the brand in our display.”

IMS New York City takes place Dec. 9-11 at the Javits Center. Doors open 2pm Friday, 9am Saturday and 9am Sunday. Ticket prices are $20 for Adults and free for children ages 11 and under.

Relive the Veterans Charity Ride to Sturgis 2016 as we go deeper into the journey, the ride, and the men and women who deserved every single mile of it.

It seems the AMD bike show is not being missed here in Sturgis at the Rally, with more bike shows being held than you can poke the proverbial stick at. Today’s efforts included the Road Iron/Eddie Trotta/Dirty Bird Concerts Bagger Show.Yep, baggers, baggers, baggers – where once the rally teemed with choppers, now it is Bagger City. The venerable Rat’s Hole show was held, the Hamsters Custom Bike Show Mayor’s choice Award, the Cycle Source Night time Chopper Show – the list goes on.

The big news, however, are the awesome new Indians which are generating huge interest.

All the signs are that the attendance this year is way up with many vendors reporting excellent sales. Bert Baker was smiling broadly, but then he almost always is, the boys at Performance Machine were putting in long hours fitting their superb wheel, the Kuryakyn display looked like an ant farm with customers jammed shoulder to shoulder shopping for all sorts of goodies and Mike Corbin was sitting back and purring like a Cheshire cat.

Thursday wrapped up for many rally patrons with a performance by Lynyrd Skynyrd.

Enter for a chance to win the all-new 2014 Indian Chief. First introduced in 1922, the legendary Indian Chief is historically the brand’s most popular selling model and is widely recognized by motorcycling enthusiasts around the world as one of the most iconic motorcycles ever produced. The Indian Chief is the flagship of the brand’s 112-year product lineup, and it has come to proudly represent the spirit of the Indian Motorcycle brand. Don’t miss your chance to win a part of history.

We took all three new Indian bikes today, but before we bring you a more in-depth evaluation, here's what an enthusiast had to say about his first ride on a 2014 Indian in Sturgis on Sunday.

Duane was the very first rider to throw a leg over a bike at the Indian Motorcycle demo this morning. We are honored by Duane's reaction and can't thank him enough for his long standing passion for Indian Motorcycle.

Last night, Bikernet (along the rest of the world) looked on as Indian Motorcycle ushered a new era in American motorcycle history in Downtown Sturgis, on the grounds of the Sturgis Motorcycle Museum & Hall Of Fame. The much-anticipated return of the Chief played out in front of a dense and enthusiastic crowd that had gathered for the momentous event. Entertainment was provided by a rock band, opening for of soulful rendition of the national anthem played by a talented trumpet player.

Atop the museum building, on each side of the facade, curtains opened on a pair of red Indian motorcycles that appeared out of a cloud of smoke and the crowd went wild as a group of riders, all tied one way of another to the Indian name and lore, rode in and parked a collection of 2014 Indian motorcycle for the world to finally admire.

You will find the Indian Motorcyce truck off the I-90 Exit at Lazelle; you can't miss it.

The New Indian has arrived.

Today is the day the #‎IndianChiefReturns

The live coverage of the event will begin at 8 p.m. MDT and the bikes will be revealed around 10 p.m. MDT.

You can learn more here.

It might not rekindle the famous "Indian wars" with Harley-Davidson in the 1920s, but it's already sparked some controversy.

On Aug. 3, Indian Motorcycle Co. will unveil its new Chief motorcycle, which is aimed squarely at Harley's lineup of bestselling bikes.

The unveiling will take place at the annual Sturgis Motorcycle Rally in Sturgis, S.D., which attracts several hundred thousand people and is one of the biggest events of the year for Harley-Davidson riders.

The original Indian Motorcycle Co. went out of business in 1953 and its Indian-head logos became collector's items. Numerous attempts to revive the company failed, but Indian has its best chance under Polaris Industries, a $3 billion Medina, Minn., manufacturer that acquired the brand in 2011 and is known for snowmobiles, all-terrain vehicles and Victory motorcycles.

Polaris is redesigning Indian bikes from a clean sheet of paper. The new Chief will be the first in the lineup to come from the company's Spirit Lake, Iowa, factory.