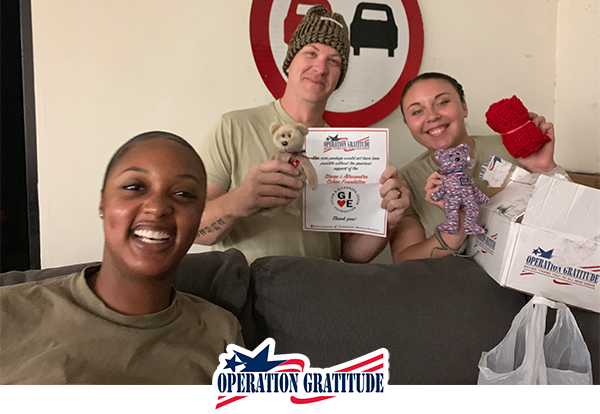 This week you probably received several thoughtful emails about the 18th anniversary of 9/11.  While many organizations talked about ways to honor the fallen, Operation Gratitude acted to do so – demonstrating to our military and first responder heroes that we, as a grateful nation, would never forget their service and sacrifices.

In New York City on September 5th, Operation Gratitude joined hundreds of New Yorkers to assemble 10,000 Care Packages filled with more than 400,000 individual items for deployed Troops around the world and First Responders here at home.

We couldn’t have done it without you! Our collective efforts to give back in a hands-on way to our nation’s heroes were featured during this live remote on Fox & Friends.

We received your care packages today…(they) brought tears to peoples’ eyes, and knowing they’re remembered and cared for is a gift that is priceless to the soul. Click here to read more….

Now we need more of your ACTION. In addition to sending us handmade items to fill 75,000 Care Packages you can help us ship them to deployed Troops, Veterans, Wounded Heroes and their Caregivers on Veterans Day, during the Holiday Season, and through the end of the year.

On 9/11 and over the past two days, thousands of those Care Packages were delivered to Service Members in harm’s way, as well as in-person to 800 Police Officers, Firefighters, and EMTs who were among the first to respond to the terrorist attacks on the Pentagon 18 years ago.

Because of you, our actions really did speak louder than words. The impact you made is clear in the words of this young Airman, John, who received a Care Package on 9/11; he will never forget your kindness: