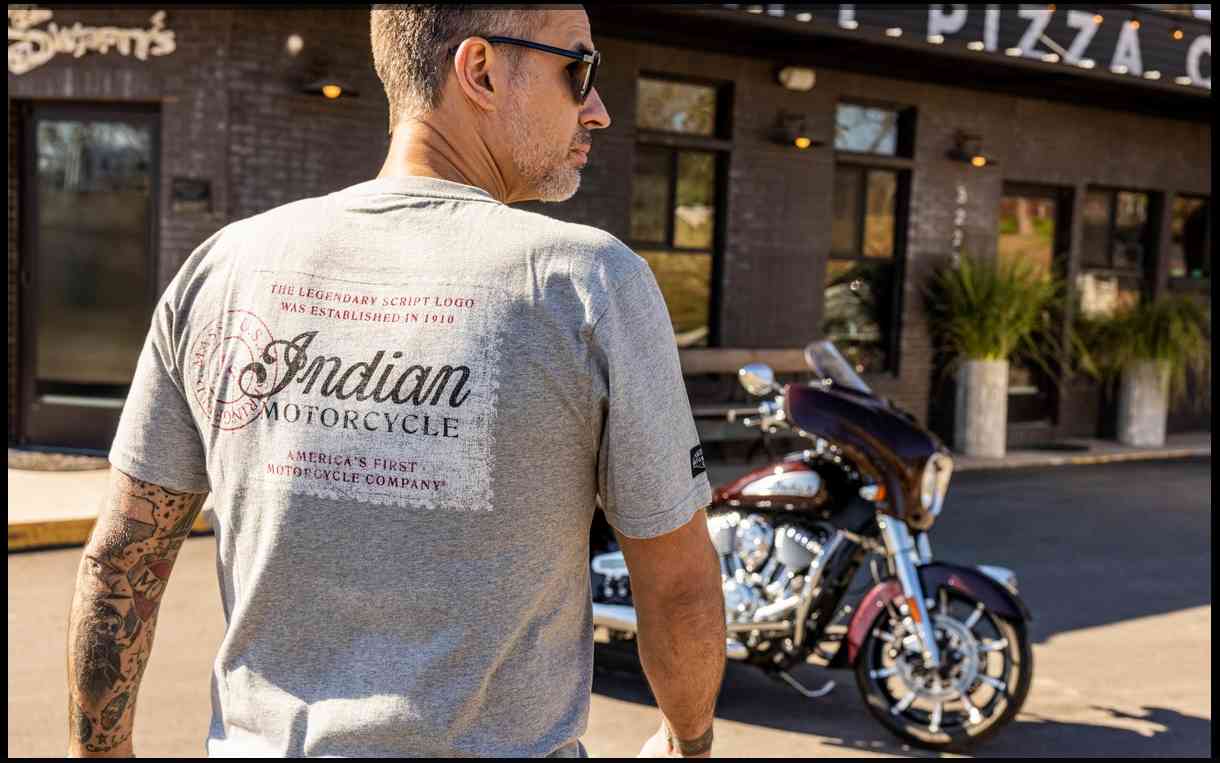 Indian Motorcycle is launching the new 2022 Milestones Collection of casualwear for men and women.

The Milestones Collection aims to celebrate the brand’s heritage by correlating each piece of apparel to a significantly iconic element from its 121-year history. Featuring premium quality and construction, the line includes nine new arrivals.

1920 Scout Engine Tee
Since its debut in 1920, the Indian Scout has set the standard for American cruisers and carved its place as a truly iconic motorcycle. With its innovative helical gears and lightweight frame, the Charles Franklin 1920 Scout became a favorite of riders seeking a thrill. Today, the Scout remains a popular choice for new and experienced riders alike. The 1920 Scout Engine t-shirt features the iconic 1920’s Scout engine on the back of the white pocket tee, with an exclusive “Milestones Collection” label on the sleeve. It’s available in the men’s classic fit.

1910 Script Tee and Hat
Introduced in 1910, the Indian Script logo ushered in a new era of success on and off the track for Indian Motorcycle. Within a year of the logo’s inception, the Indian Motorcycle racing team swept the podium at Isle of Man – the first of many podium finishes to follow. The grey marl 1910 Script T-Shirt features the original Indian script stamp graphic on the back and is available in the men’s classic fit. The hat, featured in black, includes an embroidered Indian Motorcycle script logo.

Big Chief Tee
One year after legendary Isle of Man racer and Indian Motorcycle engineer, Charles Franklin, launched Indian Motorcycle’s most enduring line, the Chief, Indian Motorcycle (formerly Hendee Manufacturing Company) introduced the Chief 74. This bike featured a class-leading 74 cubic-inch engine and boasted more power than any other Indian Motorcycle to date, earning it the name “Big Chief.” 100 years later, the reborn Indian Chief honors the original machine – one of the most historic and influential motorcycles of all time. Available for both men and women in black, the 1922 Big Chief T-Shirt features a distressed graphic sketch of the original Big Chief motorcycle on the front with and an exclusive “Milestones Collection” label on the sleeve.

IMC Factory Sign Tee and Hat
Founded in Springfield, Massachusetts by world-renowned bicycle racer George Hendee and powered by Oscar Hedstrom’s revolutionary 42-degree V-twin engine, Indian Motorcycle built a legacy through technical innovation, racing excellence and unmatched brand loyalty. The IMC Factory Sign T-Shirt features the original Springfield, Massachusetts factory sign and a list of key milestones from the early days of Indian Motorcycle. The Factory Sign Tee is available for both men and women in charcoal grey and in the classic fit. In addition, the hat is available in grey marl and also features the factory sign.

841 Bike Tee
Amidst the second world war, the U.S. War Department issued contracts for experimental military motorcycles. Indian Motorcycle developed numerous options, including motorized tricycles and extremely lightweight motorcycles that could be dropped out of airplanes. These offerings earning the company two Army-Navy “E” Awards during the war. The 841 Bike T-Shirt features the shaft-driven Indian Motorcycle developed specifically for desert warfare. This bike was one of three Indian Motorcycle models that answered the American and Allied forces call to action. This white men’s tee features the 841 bike American Flag Shield graphic on the back and is available in the men’s classic fit.