In Case of Emergency, Please Remove Your Bra 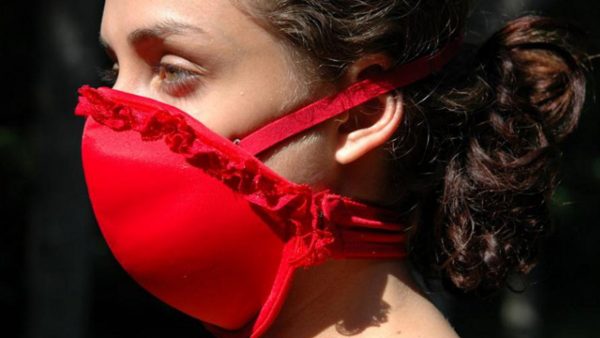 The Emergency Bra is a protective garment that transforms into two respiratory face masks in case of an emergency. (www.Ebbra.com)

Caught in a disaster? You’d better hope you’re wearing the Emergency Bra. Simply unsnap the bright red bra, separate the cups, and slip it over your head — one cup for you, and one for your friend.

Dr. Elena Bodnar won an Ignoble Award for the invention last year, an annual tribute to scientific research that on the surface seems goofy but is often surprisingly practical. And now Bodnar has brought the eBra to the public; purchase one online for just $29.95.

“The goal of any emergency respiratory device is to achieve tight fixation and full coverage. Luckily, the wonderful design of the bra is already in the shape of a face mask and so with the addition of a few design features, the Emergency Bra enhances the efficiency of minimizing contaminated bypass air flow,” explains the eBra website.

It sounds silly, but Bodnar, a Ukraine native who now lives in Chicago, started her medical career studying the effects of the 1986 Chernobyl nuclear plant disaster. If people had had cheap, readily available gas masks in the first hours after the disaster, she said, they may have avoided breathing in Iodine-131, which causes radiation sickness.

The bra-turned-gas masks could have also been useful during the Sept. 11 terrorist attacks, and for women caught outside during the dust storms that recently enveloped Sydney, she said.

“You have to be prepared all the time, at any place, at any moment, and practically every woman wears a bra,” she said. Her patented devices also look pretty, no different from a conventional bra, she added.

According to a report on tech news site CNET, there are plans for a “counterpart device for men” in the works, though the precise shape it will take has yet to be revealed.