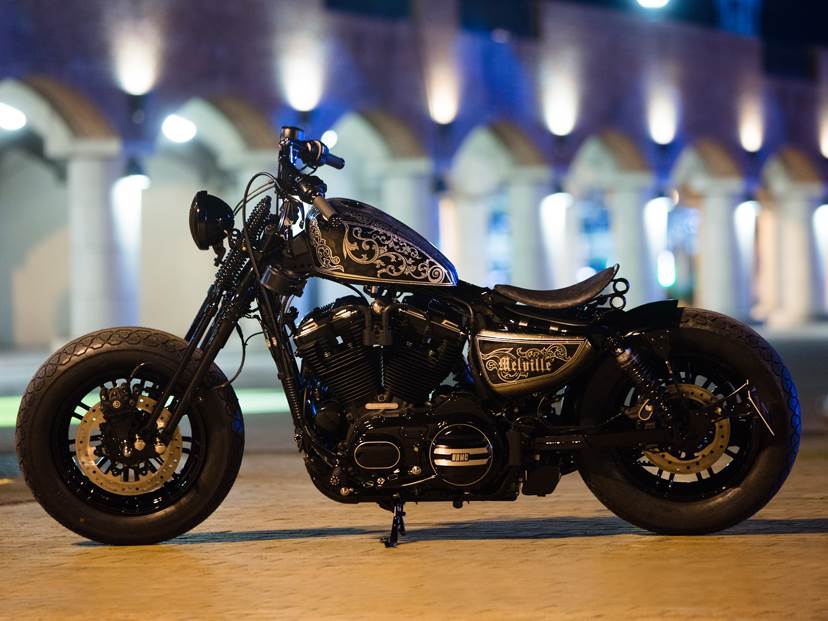 Technically, this modified Harley-Davidson Forty-Eight has been designed to be incarnation of a bunch of Japanese myths. Looked at from afar and in a totally superficial manner, it looks more like something the Yakuza would ride around on.

The bike is the creation of Harley-Davidson’s dealer in Shizuoka. It has been the shop’s entry in the King of Kings competition whose winner, the Mexican Apex Predator, was chosen by the public in April. Called Melville, the motorcycle was once a stock Forty-Eight that received both a serious makeover and a bunch of new parts.

The shop had to stay true to the rules of the Harley competition, and that meant taking at least half of the custom parts from the Harley inventory. A long list of such hardware, including things like the rocker covers, the saddle, or the fuel cap, are also of Harley origin, but new to this Forty-Eight.

What strikes the eye the most when looking at the bike is the way it looks. The pitch-black apparition lacks the chrome parts others are so in love with and use extensively on their builds, and even the fork is black. The only thing that breaks the trend is the extensive drawing on the fuel tank and some of the other new parts on the motorcycle.

According to the people behind this build, the tattoos displayed in a silver that perfectly offsets the dark tone of the bike are supposed to separately represent things like “prayer,” “death,” and “awe,” and combined to form some type of myth that is easy to understand if you’re Japanese.

Of course not all those who voted in March and April were Japanese, and many of them probably didn’t get the message the builder tried to send, so the bike did not climb at the top of the charts when it all ended.

Still, even without completely grasping the myth thing, the Melville is a nice build to rest our eyes upon.