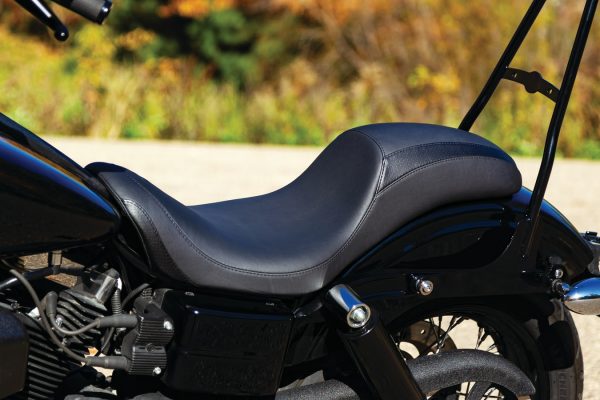 Here’s an updated version ofMustang’s popular Fastback series, the all-new HighTail Fastback. It features all the comfort that put Mustang on the map in a sporty, low profile package that positions riders lower and 1” further back than the original.

Available for 2006-’17 Dyna and 2008-’19 Touring models, the HighTail provides a comfortable but aggressive riding position that allows riders to get the most out of their machines. The HighTail’s signature 6” high wall offers exceptional lower back support and keeps riders from sliding back in the saddle, making it perfect for aggressively twisting back the throttle or casually feasting on mile markers. A contoured and low-profile 13.5” wide driver bucket positions the operator lower and further back compared to most stock seats, while Mustang’s proprietary controlled-density foam provides even weight distribution to eliminate pressure points for long-haul comfort. 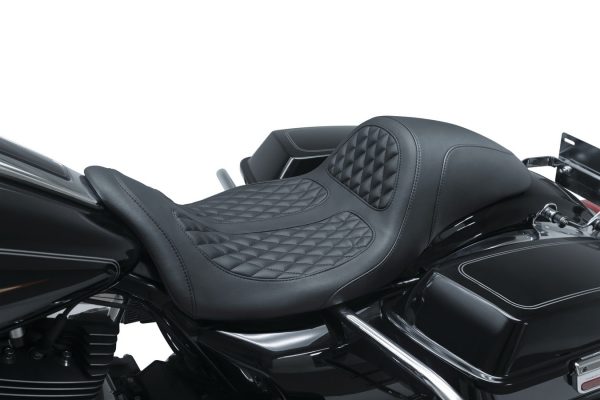 The hand-sewn cover is made from premium expanded vinyl that has the appearance of leather and durability to withstand the elements. Features include detailed stitch work and a blend of smooth vinyl with perforated vinyl inlays for a subtle contrasting effect. Additionally, Mustang’s Custom Seat Program offers a wide variety of stitch patterns as well as thread and vinyl color variations to create your own one-of-a-kind design. The HighTail for 2008-’19 H-D Touring is also available as part of the Dave Perewitz Signature Series by Mustang, which features classic diamond-stitched panels for added style.For more information on the new HighTail offerings, visit www.MustangSeats.com or call to speak with a Mustang representative at 800-243-1392 or 413-668-1100 to learn more about custom seat options. 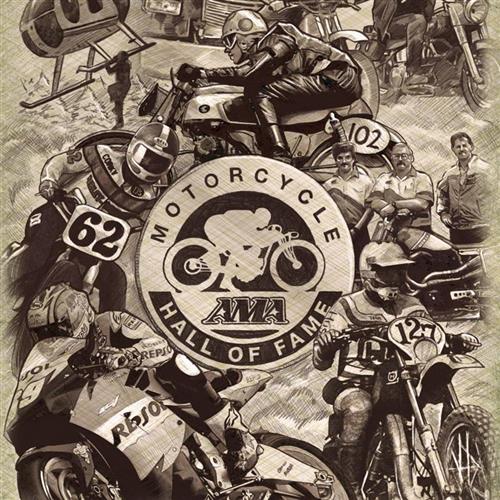 Motorcycling greatness is found on tracks, in shops and on roads and trails across America.

It’s born in the minds and hearts of riders who, at one point or many, put motorcycles above all else in their lives to accomplish amazing things, inspiring the rest of us to ride more.

The AMA Motorcycle Hall of Fame Class of 2018 includes six riders who have done just that. Read more. 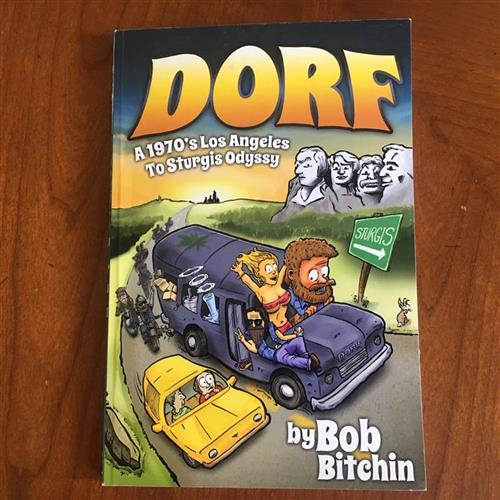 You know it’s going to be a fun ride when the janitor at Bikernet.com has a cameo appearance in the book. Yes Keith Ball showed up on page 73. Now this is a completely fictitious book so any resemblance to actual people or events may or may not have happened.

Bitchin Bob takes us on wild ride via his drug addled memory of a 1970’s summer trip to one of the early Sturgis Rallies. Now I’ve been to the modern day Sturgis and yes if you look you can still find a resemblance to the freedom and debauchery of the original 1% rallies. This story even though it is completely “fiction” is a peak into history, our history. You will get an idea what the original rallies were like. Read more. 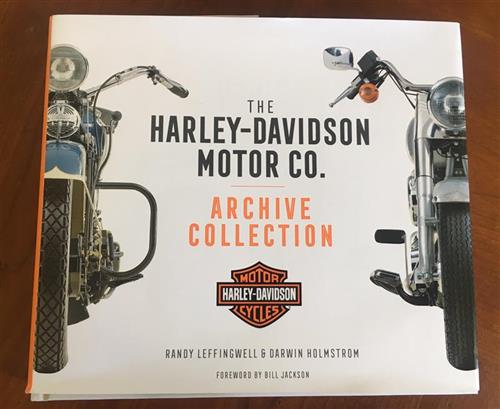 Like those too broke for Sturgis parties this books gives us a glimpse into the Harley-Davidson museum. Through amazing photos and a strong narrative it give you a peek into what you will see when you actually get to make that pilgrimage to the source.

H-D is one of the few companies that saw the need early on to preserve its history in both documentation and examples of its product. Not all items in the Archive Collection are original but the idea it to capture and preserve forever the memorable moments in the companies wonderful past. Read more.

Tips For Prepping Your Bike for Storage 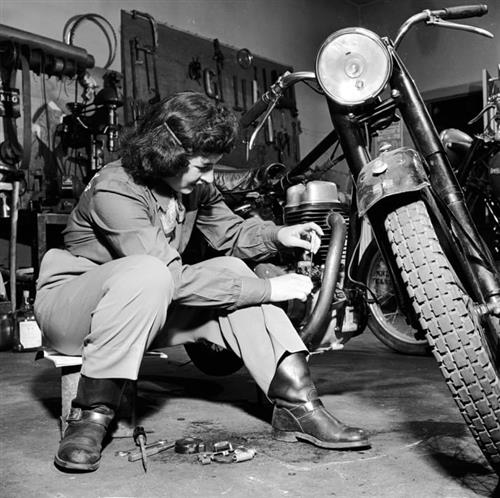 Enjoy One Last Ride – This may sound like a no-brainer, but putting the bike away for the season sucks – yeah, we said it. Enjoy one last long ride of the season and savor every moment. Read more. 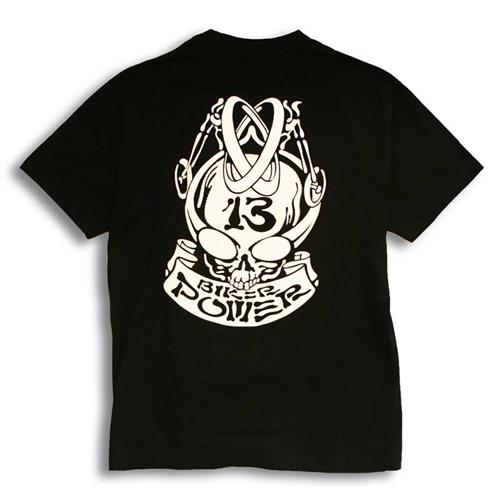 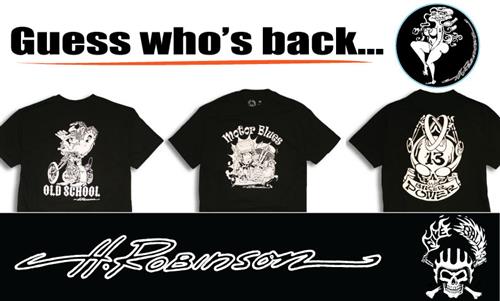 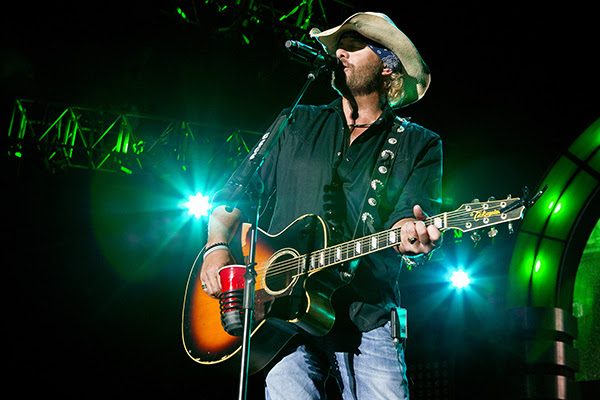 Twenty no. 1 Billboard Hot Country Hits and 42 Top Tens make Toby Keith one of America’s most successful artists, and on Thursday, Aug. 8, 2019 fans will have the chance to hear this icon perform many of them live at the Sturgis Buffalo Chip. The performance coincides with the Chip’s 28th annual Freedom Celebration, a fact that is no coincidence. Keith has written and performed several extraordinarily patriotic no. 1 hits, has made several trips to the Middle East to entertain American troops and makes plain that his father was a combat veteran. See the announcement video here: BuffaloChip.com/BANDS

“Toby Keith has not only produced hit music every year over the past three decades,” said Rod Woodruff, Sturgis Buffalo Chip President, “he has legendary onstage energy. In 2005 when he performed at the Buffalo Chip, he stood up and put on an amazing show through one of the worst thunderstorms we’ve ever witnessed. The audience refused to budge and stood cheering through the rain in total awe of this guy! We couldn’t be happier to have him back to work his magic on the Wolfman Jack Stage.”

Keith’s songs have received more than 91 million BMI performances on commercial radio stations worldwide, and he has sold more than 40 million albums. The awards bestowed on him are too numerous to count and include Billboard’s Artist of the Decade, American Country Awards Artist of the Decade, as well as the ACM’s Career Achievement honor and Entertainer of the Year twice in back-to-back years.

Keith’s addition to the 38th annual Sturgis Buffalo Chip Motorcycle and Music Festival is a indication of the incredible lineup still to be announced. The festival will open with a pre-rally party July 29 – Aug. 1, 2019, with official festival dates running Aug. 2-11, 2019. In addition to Toby Keith, the Buffalo Chip has also announced the performance of country music superstar Keith Urban on Saturday, Aug. 3, 2019, as well as Styx and Collective Soul on Monday, Aug. 5. Fans can expect more band announcements for 2019 in the coming weeks. Concerts and races are free with camping. More information and reservations are available at BuffaloChip.com 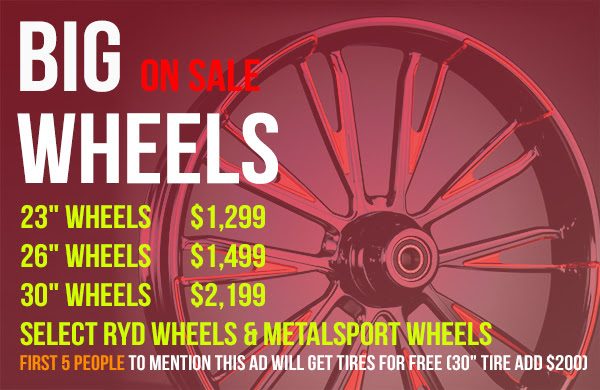 Our Black Hills Series shocks are featured on BLACK FRIDAY at 25% off. For a small investment, we will make a huge difference in the handling, comfort, and control of your bike. CLICK HERE for the RIDE of your LIFE.

Increase handling, comfort and improved stability with the ultimate suspension upgrade: our combination Black Hills Shocks and Suspension Technologies’ Fork Cartridge. Save over $195 for the best handling bagger you have ever experienced. It’s just a click away – CLICK HERE

Our American-made and proven Mechanical Reverse Pulley (MRP) is the industry’s leading reverse system for Harley-Davidson’s touring models. You can park anywhere and reverse out. It’s simple to use and is on Black Friday special today. CLICK HERE for Details.

FROM THE HAL ROBINSON ARCHIVES 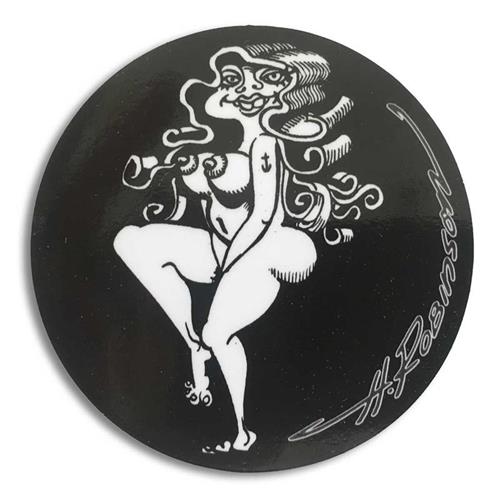 Get a famous Hal sticker with each order.

— Red has a tattoo of Bette Boop on his left arm. He lights up a joint as he gets ready to take off to meet his destiny. Old guys rule is his motto. Shirts and prints with Red and Bette and much more by Hal Robinson and Five Ball are still for sale while they last. Get your orders in today in time for the holidays!